Okay, I’m gonna start today’s review by saying this isn’t at all what I was planning to review today.  Today, I had intended to continue my look at DC Icons with Deathstroke.  So, just a few hours ago, I got my photo stage all set-up and ready to take pictures of him, and then…I couldn’t find his accessories.  So that was a no go.  Instead, I guess I’ll take a look at an entry from Icons’ pseudo-sister-line, DC Designer Series: Ant Lucia.  This line takes the work of artist Ant Lucia from his DC Comics Bombshells series and turns them into Icons-styled figures.  Today, I’ll be taking a look at Wonder Woman.

DC Bombshells Wonder Woman is the first figure in the first series of the DC Designer Series: Ant Lucia line.  The figure stands about 6 3/4 inches tall and she has 29 points of articulation.  Despite the Icons styling, the height of this figure actually brings her more in line with the likes of Marvel Legends or even DCC’s earlier output.  That being said, Wonder Woman’s actually a little taller than the rest of the line, so I think they’re just going for a slightly taller take on Wonder Woman.  That being the case, she’s not that horribly out of scale with later Icons figures.  Wonder Woman has an all-new sculpt, based on her Bombshells design.  I’m picky about my Wonder Woman designs, but I’m a pretty big fan of this one.  It’s a departure from the usual, but unlike a number of Bombshells redesigns, it actually outs her in more clothing than she usually wears.  The sculpt does a great job of translating Lucia’s artwork into three dimensions, as well as doing a pretty solid job of integrating the articulation in pretty smoothly.  By far my favorite part of the sculpt is expression on Wonder Woman’s face, which shows her cackling with sheer joy.  There’s just so much life in that expression, and when compared to the likes of the bland expressions seen on most of the Icons figures, it just looks so great.  It’s really fun.  Wonder Woman’s paintwork is all around pretty solid work.  The colors all fit the tone and style of the original art, and everything is very clean.  I quite enjoy the blue highlights in her hair, as it calls back to classic comic art very nicely.  Wonder Woman is packed with three sets of hands (in fists and two different styles of griping), a big wrench, and a cinderblock linked to a big chain (which can even split at the middle loop, making it look like she’s just broken it).  It’s a really fun selection of extras, to be sure.

I’ve been wanting to get at least one of the DC Bombshells figures since they were announced and released, but I was never quite sure which one I wanted.  I decided to grab one of them during Cosmic Comix’s 26th Annual Annual Sale, and since Wonder Woman was the only one they still had in stock, the choice was made for me.  I’m actually not upset about that at all, because Wonder Woman’s one of DC Collectibles’ best offerings to date.  She’s a ton of fun! 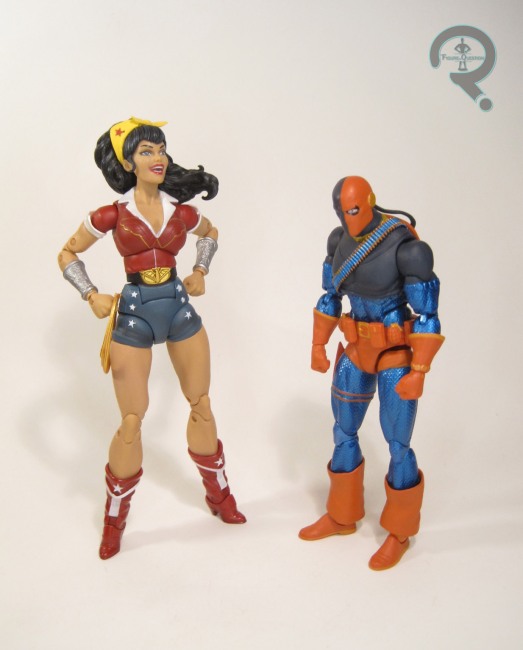