I am, if nothing else, a creature of habit.  For two years running, I’ve made a point of sitting down and reviewing the latest Star Wars flick, and so, gosh darnit, I’m gonna do that again!  As I noted when I reviewed Rogue One, while I may be primarily an action figure reviewer, the Star Wars franchise is so interwoven with its associated merch that it just sort of feels right.  So, without further ado, here are my thoughts on Star Wars: The Last Jedi!

I loved both The Force Awakens and Rogue One, so this movie certainly had its work cut out for it in terms of living up to the hype.  Popular consensus on the film is still very much split down the middle, with half the audience claiming it’s one of the best things ever to come out of the franchise, and the other half deriding it as the worst Star Wars film ever made.  I’m gonna tell you up front: I’m in the first category.

As of yet, I’ve only seen the movie one time, so I don’t have a 100% accurate reading on where it stacks up compared to its predecessors.  I certainly won’t deny that the movie has its flaws, and I did find there were some more noticeable issues this time around that I didn’t experience with my first viewing of either Force Awakens or Rogue One, but I was still very much entertained for my 2 hours and 40 minutes in the theatre, and I walked out very content with the final product.

There were still some similar story beats to what we’ve seen in the past, with a lot of elements pulled from both Empire and Return (which, thanks to this film, I don’t think I can just refer to as “Jedi” anymore), but they were presented a bit differently than what we saw in Force Awakens, resulting a very different feeling movie than its predecessors.  And, with that in mind, I understand that this movie isn’t going to resonate with everyone, though I’m surprised by the level of fan vitriol surrounding this one.  I genuinely don’t see how anyone can claim this film is worse than Attack of the Clones…

Now, lets discuss some of the specifics.  The film sees the return of most of the last film’s major players, swapping out Han for Luke, of course, as well as introducing us to a handful of new characters.  I felt they did a pretty solid job of balancing the various characters and making sure everybody got a pretty decent storyline.

At the head of the movie are Rey and Luke, following up on the last film’s cliff-hanger ending.  These two had a good report, as Rey tries to get Luke to open up to her about the past and train her as a Jedi.  We finally get to see some of what sent Luke off into isolation, and Hamill gets to flex his acting muscles and inject a fair bit of pathos into our weary hero.  For her part, Ridley continues to play Rey as very likable and relatable, and it’s fun to watch her progress as a character.

Running in sync with Rey and Luke’s plot, we get to see more of Poe, Finn, and Leia, as they and the rest of the Resistance fend off the First Order.  I very much enjoyed Poe’s attack on the First Order Dreadnought which opens the movie, which serves to reintroduce us to Poe, BB-8, and Hux in a rather amusing sequence, before delving us into actions that drive this segment of the plot for the rest of the film.  I also liked getting to see a bit more of Oscar Isaac as Poe this time around, even if I do feel the film may have been a little rough on him at times. Nevertheless, he gave an immensely enjoyable performance.  Not to be outdone, though, are John Boyega and Carrie Fisher as Finn and Leia, who both give fantastic performances.  Finn continues to view things from the middle of the conflict, providing context for the actions of both the heroes and the villains as he struggles to find his own personal morals.  Leia gets an expanded role compared to TFA, and Fisher’s performance is pretty much everything I wanted.  This movie does a lot to highlight why Leia remains one of the greatest leaders in the franchise.

After spending a fair bit of the last film lingering about and looking very ominous, Adam Driver’s Kylo Ren gets a more emotional arc this time around, as he deals with the fall-out of killing his father, and just how far gone he is.  A series of long distance communications between him and Rey allows him to continue to interact with her despite their separation at the beginning, and I really enjoyed their chemistry this time around.  As a whole, Kylo comes out of this movie much more fully formed, and I liked that.

The other returning players get more minor parts, but they each get a scene or so to do something cool or fun for their character.  After being somewhat ineffective the last movie, Phasma gets one of the film’s coolest fight scenes opposite Finn.  Maz Kanata gets a fun little cameo courtesy of a hologram, and Chewbacca finally gets to show off his piloting skills.

In terms of new players, the film introduces us to Kelly Tran’s Rose, Laura Dern’s Vice-Admiral Holdo, and Benicio Del Toro’s DJ.  Rose stood out to me as my favorite new addition.  Her side mission with Finn was a great little character bit for both of them, and she really felt at home with the rest of the cast.  She also gets to deliver the film’s central message of “Don’t fight what you hate, save what you love.”  DJ isn’t a huge role, but Del Toro’s good at playing a scoundrel and he’s clearly having a good time.  By far my least favorite new addition was Holdo, who just struck me as not being terribly interesting.  It’s not that Dern’s performance is bad or anything, but the character certainly isn’t as well developed as others, and I found her to be rather grating at times.  Nevertheless, she’s actually part of one of my favorite moments in the film, so I can’t say she ruined my experience.

Spoilers after the jump. 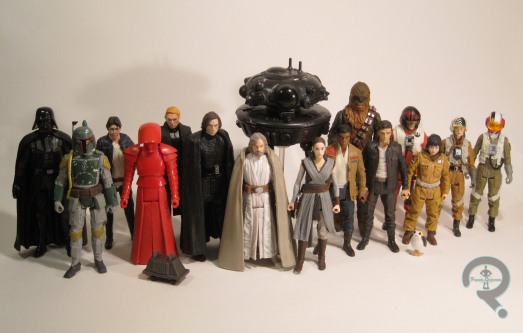 In the non-spoiler section, you’ll probably note one major character I left out: Snoke.  Snoke was set up as a major antagonist and a prominent threat all throughout the movie’s first half, but the actual character himself proves to be little more than a Palpatine re-hash.  For this reason, I was not at all saddened by his mid-film death at the hands of Kylo, though I was certainly a little surprised.  I very much enjoyed the following sequence of Ben and Rey tearing through Snoke’s guards, and was a little saddened that it ended with Ben truly giving up on the Resistance and declaring that the old must die out.  That being said, the movie does a good job of giving you Ben’s side of it all, and while he may be going  about it the wrong way, his motives feel more realized than prior antagonists now.

The movie also sees the death of two Original Trilogy heroes.  Neither one is Leia as some had expected (though she does have a brush with death early on, leaving her in critical condition for the middle of the film).  The first is a more minor one: Admiral Akbar.  It’s almost easy to miss it, but he’s confirmed to have died during the attack on the lead Resistance ship’s bridge, brining an end to one of the franchises more distinctive second-tier characters.  The bigger loss, of course, is Luke.  I wasn’t completely caught off guard by this, but I was certainly sad to see him go.  That said, I felt it was a fitting send off, and it was nice to see him get a peaceful end after all of the turmoil he went through.  I’ll be interested to see if he returns next time around as a force ghost.

All in all, this was another success for the franchise.  It’s a solid movie, and it delivers what I wanted.  Episode 9’s certainly got its work cut out for it, though, given that The Last Jedi ends on perhaps one of the bleakest endings of the entire franchise.  Nevertheless, I think they’ve got the makings of a great conclusion to their latest Trilogy, and I’m excited to see where they go from here.