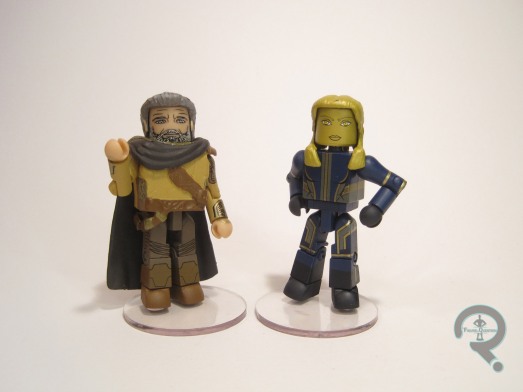 Every good movie needs a good villain.  Sometimes a bad movie tries to compensate for its badness by adding extra villains in the hopes of that making the badness less noticeable, like in the Joel Schumacher Batman movies.  Fortunately, that wasn’t at all the case with Guardians of the Galaxy Vol. 2, which deftly handled having two antagonists by having one be the primary (Ego), and the other just a secondary (Ayesha).  It allowed both to have their own moments to shine, without the film feeling too cluttered.  As luck would have it, those two are the two figures I’m looking at today!

Ego and Ayesha, like yesterday’s set, are exclusive to Marvel Minimates Series 71.  Also like yesterday’s set, the pairing is a little bit off.  I mean, it’s not quite as bad, since these two at least share one scene (not that they actually interact during it), but I can’t help but feel the pairings would have made more sense if it had been Ego/Mantis and Ayesha/Taserface.  But I bought the whole assortment anyway, so I guess it doesn’t ultimately matter. 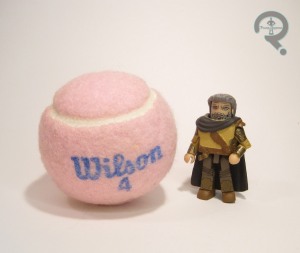 As noted in my last Ego review, the film changed a few things about the character in order to translate him to film, but I thought it worked out pretty well.  Like that figure, he’s based on Ego’s modern-day “human” appearance.  The figure stands about 2 1/4 inches tall and he has 14 points of articulation.  He’s based on the standard ‘mate body, with add-ons for his hair and his shirt/cape/belt.  Both of these pieces are new for Ego, and they’re both fairly decent.  I wouldn’t mind if the details of the sculpt were a little bit sharper, but they could be worse.  I’m not 100% sure why they’ve gone with a sculpted torso rather than just painting the details on, but it looks alright in the end.  Ego’s paintwork is decent enough, though like his movie counterpart, he’s a tad on the bland side.  Still, that’s accurate, so one can hardly hold that against him.  The face is a passable rendition of Kurt Russel as Ego, though it’s not quite as spot-on as some ‘mate likenesses.  Ego’s only accessory is a clear display stand.  What, no extra head with only the most minor cosmetic changes?  For shame!

Like Ego, Ayesha got some changes in her journey from the page to the screen.  In the comics, she’s an artificial human like Adam Warlock (who she looks to be the creator of in the movie-verse), and only actually an antagonist in the loosest sense of the word.  Neither version of her is super prominent.  She has a number of different designs over the course of the film, but this ‘mate goes for her more active pilot’s gear from when she’s flying the remote ship at the end of the movie.  I personally liked this design the best, so no complaints there.  She’s also constructed on the standard body, with a new hairpiece.  It’s an okay piece, but it’s very restrictive of the head movement (a common issue with the females in this series), and it looks a bit more inorganic than I’d expected.  Ayesha’s paint is clean and bold, and does a reasonable job of recreating the on-screen design.  All of the gold stands out really well against the darker blue, and gives her a lot of pop.  Like Ego, her only extra is a clear display stand.  I guess a piloting console was a bit much to ask for…

I didn’t know much what to expect from this set.  I liked both of the characters in the movie, so I’m certainly glad to have them in figure form, and they do a nice job of rounding out my overall set.  Neither one of them stands out quite as much as any of the others in the set, but they’re still solid additions.