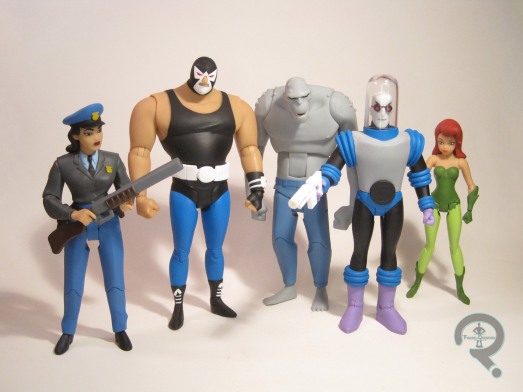 For my ninth and final 2017 post-Christmas review, I’m returning to a line that fills me with lots of mixed emotions: DC Collectibles’ Batman: Animated.  I was very supportive of the line early on, an really liked the first couple of series, despite some of the minor flaws.  However, as the line has progressed, I’ve found a lot of the later offerings to be a bit lackluster. The thing that broke me from the line was actually the set I’m looking at today.  As I’ve noted a few times, “Heart of Ice” is hands down my favorite episode of Batman: The Animated Series, and is possibly just one of my favorite cartoons ever.  Obviously, I was eager to get a proper Animated Series Mr. Freeze.  The first figure was the New Adventures design, which is fine, but not really what I wanted.  So, what does DCC do when it finally comes time to release the classic Freeze, one of the most demanded figures in the line?  Pack him in with four other figures in an expensive boxed item.  ….Yay? 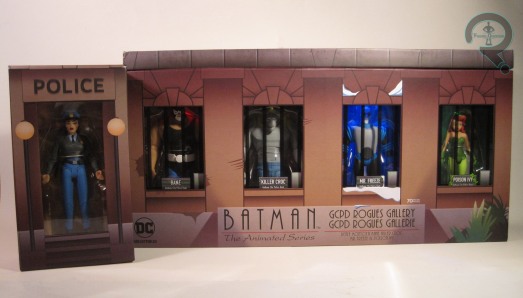 This five pack was released about mid-year last year, under the title “GCPD Rogues Gallery.”  All five figures in this set are based on their Animated Series designs, with the four titular Rogues being the second figure for each, following their TNBA design-sporting single-releases. 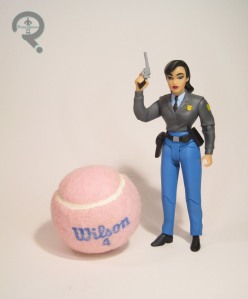 Fulfilling the “GCPD” segment of this set is Officer Renee Montoya.  Montoya is noteworthy for being the second of B:TAS’s successful original creations that made her way back into the comics after the fact (following the immensely successful Harley Quinn, of course).  Montoya is the one wholly unique figure in this set.  She’s wearing her beat cop uniform, since she didn’t make it to detective until TNBA.  The figure stands about 6 1/4 inches tall and she has 22 points of articulation.  Her articulation works better than some of the Batman: Animated figures I’ve looked at, which certainly makes me feel a bit better.  Her sculpt is definitely one of the strongest in the set, recreating her animated design rather nicely. She avoids being too devoid of detail, another issue that plagued some of the line’s other figures.  Similarly, her paint is also very strong.  The application is nice and clean, and the colors all match up with her on-screen appearance.  Montoya is packed with an extra head, a handgun, a shotgun, four pairs of hands, and a display stand.  The head offers Montoya without her hat, which I guess is nice, in theory, at least.  In practice, it’s just very annoying.  Why?  Because, thanks to the design of the double barbel DCC’s used for her neck peg, if you’re not careful when swapping out the heads (a very difficult task, I might add), then the peg will pop out of the neck, rather than the head.  I ended up having to spend about 20 minutes removing the barbel from the second Montoya head to put the one with the hat back on, and after all that, the peg is mangled to the point that I doubt I’ll be able to successfully swap it again.  Okay, but what about the guns?  Well, they look nice, but I almost broke both of them taking them out of the package.  Also, despite the plethora of hands included, there’s not really a combo that can properly hold the shotgun.

The New Adventures Bane was one of my favorite figures from the single-packed line, so this figure has a lot to live up to.  I’m gonna let you all down easy here: he doesn’t.  He’s not helped by the design, to be fair.  The B:TAS Bane design is certainly one of the weakest from the original run of the show (part of why he got such a drastic redesign later).  He’s not particularly intimidating or anything.  He’s just looks like a slightly paunchy luchador.  Not the greatest design for a villain.  The figure stands 7 inches tall and he has 24 points of articulation.  Okay, let’s get this out of the way: Bane can’t stand.  Like, at all.  Just getting the photos for this review was one of the most infuriating experiences I’ve gone through.  The actual sculpt is decent, I suppose.  It replicates the show design well-enough, but I find he lacks the playability seen on the last Bane figure.  His paintwork is decent from a palette stand-point; he’s bright and colorful.  The application’s a bit iffy, and he’s got several spots of random shininess on an otherwise matte finished figure.  It’s rather distracting and makes for a fairly sloppy looking figure.  Bane includes four sets of hands, a dumbell, and a display stand.  The dumbell’s a nice extra, but, as with Montoya, there’s not actually a hand that can properly hold it.  Doesn’t that seem like the sort of thing that you would want to double check before sending this figure out?

I never actually got the TNBA Croc.  I kept meaning to, but I never did.  It’s okay.  I’ve never been a huge Croc fan anyway, so I probably didn’t need two of him.  Truth be told, Croc’s another character who I feel had a stronger design initially, so this figure’s good for that.  He stands just a little shorter than Bane, and he has 23 points of articulation.  He has the mid-torso movement like we saw on the first Bane figure, which is certainly a plus.  It helps to make him one of the most easily posed figures in the set.  It also allows for a lot more fine tuning on his weight distribution, helping him stay standing a bit better.  The sculpt is another strong offering, and I’d certainly place him on par with Montoya in that respect.  He’s very true to the show’s design, and captures Croc’s character.  I look at this guy and can hear him saying “I hit him with a rock!”  The detail work is all very sharp and crisply defined, not soft like some of the others in the line.  The paint on Croc isn’t the most exciting thing, but it matches the show.  It’s all cleanly applied, and it looks pretty decent for what it is.  Croc is packed with three sets of hands and a display stand.  No rock to hit Batman with?  I guess I can supply my own.

Four figures in and I’m finally getting to the one that actually matters!  Yeeeeeeeaaaaahhhhh! …Sorry, that’s not really appropriate for Mr. Freeze, is it?  He’d go for a more reserved, served cold sort of thing.  Ah, yes.  A Mr. Freeze figure.  Of course.  Would that it could warm his frozen heart.  But alas, there is no hope for him.  But hey, cool figure, right?  The figure stands 6 1/2 inches tall and he has 22 points of articulation.  Freeze has nay favorite sculpt of all the figures included here.  He’s just really got the show design down pat.  The best piece by far is the head, which just looks absolutely spot-on from every angle.  The rest of the sculpt is a solid recreation of his suit design from the show, and it’s really only marred by one thing: the head dome.  On its own, it’s fine, but it doesn’t fit the body quite right, so it never sits flush the way it should and it pops out a lot.  It’s not awful, but it’s a minor annoyance, and there was no such issue on the last Mr. Freeze figure.  If there’s a major downfall to this figure, it’s the paintwork.  It’s not the worst I’ve seen in this line, but it’s definitely sloppy, especially on the blue parts of his suit.  How they got the others in this set so clean and not Victor is honestly a bit baffling to me.  Freeze is packed with his freeze gun, five sets of hands, a snow globe, and a display stand.  Ready for the common theme of this review?  Despite the large selection of hands, he can’t really hold his gun very well, and he can’t actually hold the snow globe as well.  I appreciate the extras being included, but I wish they could be more adequately used.

Last up, it’s Poison Ivy, the other hotly demanded figure in this set.  I picked up the first Ivy figure, and I liked her overall, but she was certainly a flawed offering.  I was sort of hoping that this one would fix some of those.  It does, but there are some other ones that have cropped up to replace them.  The figure stands 6 inches tall and she has 23 points of articulation.  Her sculpt is…okay? It has its ups and downs.  It’s definitely not anywhere near as accurate as the other figures in this set, which is a shame, really.  She’s far more on par with the last Ivy, in that she looks okay from certain angles, but not so great from others.  I do like that she doesn’t have the ugly seam running down the side of her hair this time.  Unfortunately, she’s now got a rather ugly bend in her right leg, as well as a severely misshapen wrist bolt.  It kind of ruins the aesthetics.  The paint on Ivy is okay, but rather on the sloppy side of things.  It’s especially bad on her legs, where there’s a few spots of errant paint.  Ivy is packed wth five sets of hands,  the Wild Thorny Rose seen in “Pretty Poison,” and a display stand.  At least she has hands that can actually hold the rose.  I guess that’s a nice change.

As I discussed in the intro, I was less than enthused by DCC’s decision to lump all of these figures into one big set, so I didn’t grab this when it was new.  My parents were nice enough to get this for me as my main gift this Christmas.  This set frustrates me because I really wanted to like it, but it’s perhaps the most frustrating thing I received this year.  Sure, most of the figures are a marked improvement on the single releases, but there are still enough flaws throughout the set that it’s infuriating.  The fact that Freeze and Ivy include more accessories also drives home the point that DCC designed them as individual releases and held them back to move this big set, which feels like a real cheap move to me.  Ultimately, I’m happy to have the Mr. Freeze I wanted.  He’s a good figure.  Montoya is also a solid addition, and Croc’s a pleasant surprise that I probably wouldn’t have gotten otherwise.  Ivy’s another flawed version of the character, though, and Bane just does nothing for me.  So, that’s 2/5 figures in this set that I would have much rather passed on.  That’s not a very good spread, especially for something that carries this hefty a price tag.