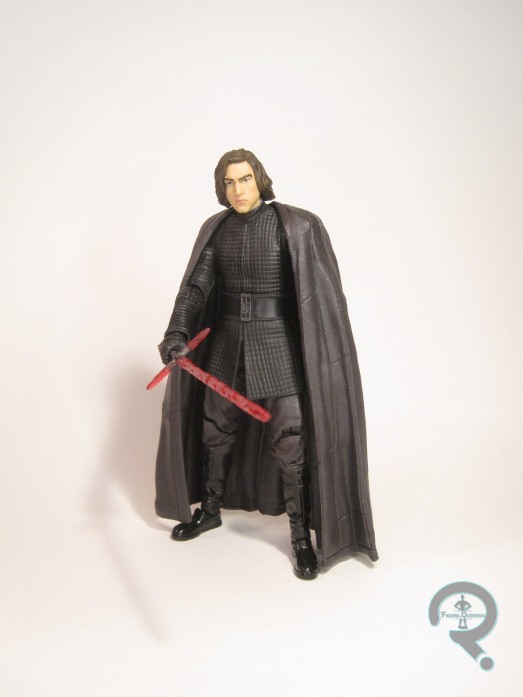 “Growing more powerful in the dark side of the Force, Kylo Ren pursues his enemies with sinister determination.  He will prove to Supreme Leader Snoke that he is truly capable and will hunt down those who caused his defeat at Starkiller Base.”

There was a lot I liked in The Last Jedi, but I think perhaps my favorite character arc contained there-in was that of Kylo Ren.  He goes from a character that could have been a rather one-note retread of Darth Vader, to something much more fully formed and unique.  Certainly the similarities still persist, but I don’t find his arc quite as predictable as it was at the end of TFA.  Just like the last movie, he was a prominent fixture of the associated toys, including the fan-favorite Black Series.

Kylo is figure 45 in Star Wars: The Black Series.  He was originally released with the seven-figure assortment that hit on Force Friday II, and was then immediately re-released with the next assortment, alongside Leia, Poe, the Guard, and Maz.  This had the unintended side-effect of making Kylo look like a particularly slow seller for a little while, but it appears things have mostly evened out now.  The figure stands about 6 1/4 inches tall and he has 29 points of articulation.  As with yesterday’s Rey figure, this is a figure that shares more than a few design elements with its TFA predecessor (and even more with the unmasked variant of that from the Rogue One product), but there are no shared pieces between them.  This Kylo is an entirely unique sculpt, and it’s quite a good one at that.  The likeness is definitely one of Hasbro’s best attempts at Adam Driver, and is closer than the last unmasked Black Series Kylo.  The rest of the body does a pretty great job of capturing all of the texturing and patterns of Kylo’s costume from the movie, thankfully unencumbered by ill-fitting cloth pieces this time around.  He’s perhaps a little scrawnier than I’d like, but beyond that, this sculpt is a pretty fantastic translation of his look from the film.  This Ren figure marks the third time we’ve gotten a sculpted plastic cape in the larger Black Series line.  It’s a much better look, especially when you’re doing the over the shoulders draped look as seen here.  It’s actually a little odd that they did Kylo this way, but still went with the cloth set-up for Luke, who was released in the very same series.  I definitely prefer how it was handed here.  In terms of paint work, Ren is admittedly pretty straight forward, mostly being a lot of flat black.  They did put some effort into making his pants a slightly different temperature of black, as well as adding a gloss finish to the boots, which certainly makes for a nice look.  Unlike the smaller figure, Ren’s scar goes unpainted here.  I’m actually not sure which way I prefer it.  While it was a little too obvious on the smaller figure, here the scar gets rather lost.  Maybe a slightly less jarring paint app?  Beyond that, the paint on the face is pretty great, and I’m happy to see he has a healthier skin-tone when compared to the very pale unmasked Kylo from TFA.  Kylo is packed with his distinctive cross-guarded lightsaber in both ignited and non-ignited forms, which, combined with the removable cape, makes for a pretty solid selection of extras.  For those that are so inclined, there’s also a deluxe version of Kylo, just released in the last few weeks, which adds a die cast helmet and a display stand based on Snoke’s throne room to the mix, though that one does swap out the nice plastic cape for a rather standard cloth one.

Kylo was certainly the easiest to find of the initial TLJ Black Series figures, but, as with Rey, I passed on him due to how similar he was to the previous figure.  And, just like with Rey, I regretted having passed on him as soon as I saw the movie.  Whilst on vacation the week after Christmas, I found this guy at a nearby Walmart, marked down to $15 no less.  I guess it was a good thing I waited.  This is definitely Hasbro’s best Kylo so far, and I’m glad I finally grabbed him.