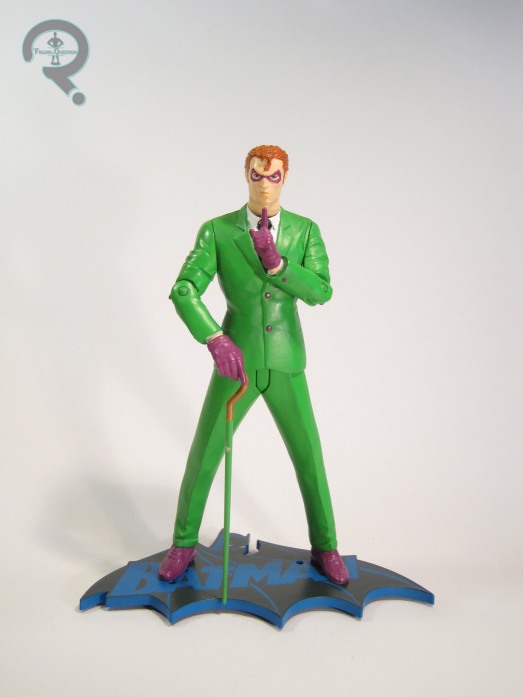 Batman’s regular foes have always had a pretty easy time with toys.  I suppose that comes with the territory, being a part of the most successful comics franchise in history and all.  That being said, some of them take priority over others.  While there’s never going to be a shortage of Joker figures, some of the second stringers get left out.  Take, for instance, Riddler.  Certainly high on the list of well-known Bat-Rogues, but he goes rather lengthy spans of time without action figures.  It actually took DC Direct a good couple of years before they got to him, and it was really only because he was a pivotal player in a storyline they were doing a full line of figures for.  But hey, beggars can’t be choosers.  Let’s take a look at that figure! 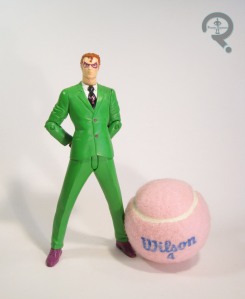 Riddler was released in the second series of DC Direct’s Batman: Hush toyline, and is based on Jim Lee’s illustrations from the “Hush” storyline.  The figure stands 6 1/2 inches tall and he has 11 points of articulation.  “Hush” saw Riddler in the business-suited attire he picked up in the mid-90s.  It’s a decent enough look, and helped to separate Riddler a bit from the legions of spandex-clad characters DCD was producing at the time.  With that being said, it was perhaps not a design that lent itself to a super exciting action figure, especially when it comes to articulation.  I would think that, at the very least, they would have tried to give him some knee joints or something.  Perhaps they wanted to preserve the integrity of the sculpt?  On the plus side of things, the sculpt is actually pretty solid.  He’s very clean and sharp.  The head definitely capture’s Lee’s artwork very well, especially the snide and serious expression,  I also really dig the question mark-shaped spit curl.  The body is really only designed to work in one particular pose, but it’s a decent enough pose, and you do have some options.  The paintwork is all pretty good; par for the era of figures.   The colors are all pretty bright, and the application is really clean.  Lee had removed the question marks from the suit, so the figure’s a little more basic looking that usual, but it’s accurate to the material.  Riddler was packed with his hat and cane, as well as a display stand.  My figure is missing the hat, but it was cool when he had it.

I missed out on the first series of Hush figures when they were released, but when I saw the prototypes for Series 2, I knew I wanted to have this guy in my collection.  I got him new, courtesy of my regular store Cosmic Comix.  I remember this series got pushed back a couple of weeks, which was really frustrating, so I was thrilled when they finally arrived.  Riddler is, I think, the figure in this set that’s aged the worst, and he certainly shows his age.  That said, he’s still one of the best Riddlers out there, especially when it comes to depictions of his suited look.