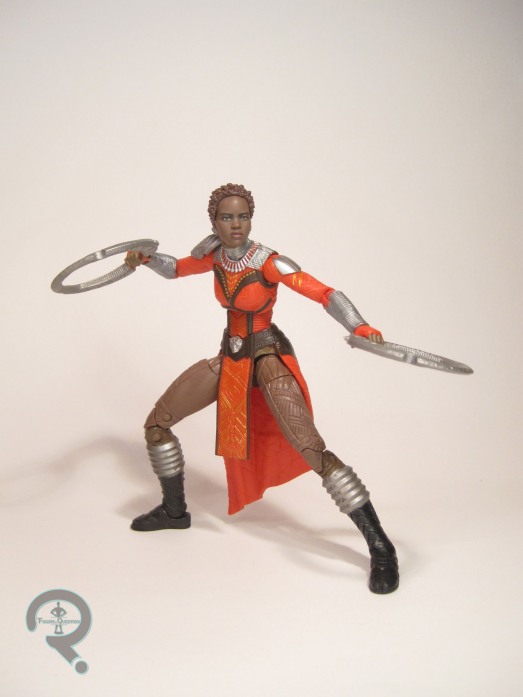 “A member of the Dora Milage, Nakia protects the reigning Black Panther with strength and poise.”

I will admit, my knowledge of Black Panther’s supporting cast, especially in recent years, is not the most extensive.  So, for most of the movie-based product, I’m just sort of going along with the flow.  Today’s focus, Nakia, is one of those characters I don’t know so well (apart from knowing she became a villain in the comics, a turn that she will supposedly not be making in the film).  But, hey, the MCU hasn’t really failed me yet, right?  Plus, she’s played by Lupita Nyong’o, who already impressed me with her turn as Maz Kanata in the last two Star Wars movies, so I have high hopes.  Onto the figure!

Nakia is the second film-based figure in the Okoye Series of Marvel Legends.  It’s actually somewhat surprising to see her turn up here, since Hasbro has a tendency to leave out supporting heroes from the solo-movie tie-ins.  Sure, the Ragnarok assortment had Loki, but he’s, you know, Loki.  But, in what appears to be the running theme for this series, I don’t really mind what the logic was if it got me this figure.  Nakia stands a little over 6 inches tall and she has 27 points of articulation.  While the actual articulation count isn’t really any higher than the average Legend (in fact, it’s a little lower), the range of motion on Nakia’s joints is truly an impressive feat of engineering.  Hasbro’s designed a figure that can get into all manner of deep poses, and the best part is it doesn’t really impact the quality of the sculpt at all.  Speaking of that sculpt, it’s worth noting that Nakia’s sculpt is totally unique to her.  It’s also pretty awesome as well.  There’s a ton of texture work all throughout, and a great set of realistic proportions.  The head also has a pretty spot-on likeness of Nyong’o, which certainly outpaces the T’Challa head from the Black Panther figure.  Nakia’s paint work is pretty solid.  I particularly like the brightness of the colors, especially on her tunic.  Nakia is also sporting the printed face we’ve seen a few times before, but I think it looks better here than it has on the last few figures I’ve seen it on.  Th figure is packed with a pair of weapons which are…big hoop things?  I don’t know what they are, but they certainly look cool.  She’s also got a small bladed weapon, as well as the torso of Okoye.

Nakia was grabbed for me by Super Awesome Girlfriend.  Nakia was one of the two figures that her Gamestop got in from this series, and she thought I might want her.  Like I said in the intro, I don’t know the character all that well, but I definitely like this figure.  I’m happy I got one, and I’m excited to see the character in action.