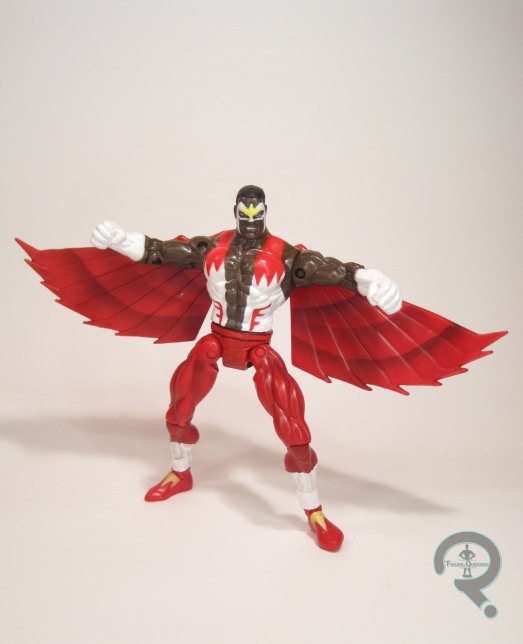 You know, there’s a surprising backlog of Falcon action figures.  Though the general public didn’t know him until his appearance in The Winter Soldier in 2014, he’s still made an appearance in just about every prominent style of Marvel figures.  Under Toy Biz’s reign, he appeared not once, but twice as 5-inch figure.  His second of those figures is the one I’ll be looking at today.  And awaaaaaay we go!

Falcon was one of the 11 figures in Toy Biz’s specialty store-exclusive  Marvel’s Gold line.  Falcon was one of the later figures in the line-up.  The big deal with this particular figure was his return to the classic design, since the prior Falcon figure was based on his design from the short-lived Avengers: United They Stand show.  The figure stands 5 1/4 inches tall and he has 20 points of articulation.  He was built on the same body as the Spider-Man line’s Daredevil.  This was definitely one of Toy Biz’s best bodies, and it’s a shame they didn’t start using it earlier into the Marvel’s Gold run, as I think Moon Knight would have been much better had they used this base.  Regardless, I’m glad it was used here.  Also re-used are Falcon’s wings, which also come from the Spider-Man line, specifically from Vulture.  They’re a bit more metallic and stylized than Falcon’s usually are, but they get the job done.   At this point in the line, Toy Biz had moved past the pure re-use that was going on at the start, so Falcon got a “new” head sculpt.  I say “new” because it’s technically re-used from the Famous Covers Falcon, albeit shrunk down a bit.  That was one of the best FC sculpts, and it still looks great shrunk down for this figure, especially given the higher depth of detail allowed.  Perhaps the only disappointing part of the sculpt is the fringe at the edge of his legs.  They’re essentially just a sticker, and it’s really lazy and obvious.  I think he would have looked better if those had just been left off.  The paint on Falcon is respectable, but not without its issues.  The basic colors work well, and the accenting on the reds looks pretty solid.  That being said, the actual application is rather messy, especially on the edges of the vest.  Falcon is packed with his trusty sidekick Redwing, as well as a glove with a perch for Redwing.

Falcon was a rather recent acquisition, picked up from the NJ-based House of Fun this past November.  It’s a figure I’ve wanted for a little while, so I was glad to find him.  He’s definitely one of the best offerings Toy Biz had from this particular line, and he’s just one of the better Falcon figures out there in general.