You know what was a good movie?  Black Panther.  Really just a solid picture all-around.  I gotta admit, I was a little worried at first that it might not live up to all of the hype surrounding it (especially since I’m apparently one of the few people on the planet who didn’t like Wonder Woman), but it really delivered, and I think it’s one of the MCU’s strongest entries.  T’Challa had already made a pretty solid impression with his appearance in Civil War, and he lived up to that here, but what really made the movie for me was his supporting cast.  I’d picked up the Marvel Legends offerings prior to the movie, and I’m happy to have the figures offered there, but sadly two of my favorite characters from the movie haven’t yet been granted Legends releases.  One of those two was Shuri, who was at least lucky enough to find her way into the movie’s basic figure line. 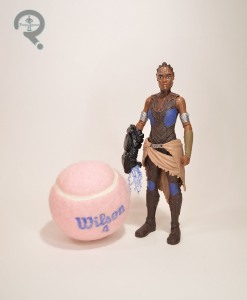 Shuri is part of the first (and so far only) series of basic Black Panther figures.  In an assortment of variations on the panther suit, she certainly stands out, and, as the only character included here that’s not in the Legends assortment, she tends to be the first figure to disappear.  The figure stands right at 6 inches tall and she has 11 points of articulation.  She’s a bit shorter than your average Marvel Legend, but given Shuri’s slightly smaller stature, she blends in pretty well.  The articulation is a little disappointing, especially after the Homecoming figures got actual knee joints, but what she’s got is certainly passable.  Shuri’s design is based on her fully geared up look from the film’s final battle sequence.  It’s definitely her coolest look, and it matches up with the version of Nakia they released, so I can certainly get behind it.  The sculpt is all-new to her, and it’s decent, but not without a few glaring issues.  The biggest problem is the hair, which is just inaccurate.  The tight braids she has here almost make it look like there’s an extra piece to her hair that’s missing from the final figure.  She should definitely have more hair than this, and it really ends up throwing off the figure’s whole look.  The face has a rather generic look about it as well, making me think this figure was put together based on design sketches rather than actual footage from the film.  I’m also not a huge fan of how the head connects at the neck; it just looks very unnatural and odd.  Fortunately, below the neck, the sculpt is actually pretty solid.  The proportions are pretty balanced, and there’s a lot of really great texture work on her armor.  Her skirt piece is a free-floating add-on, which helps to maximize posablity, and looks pretty solid to boot.  The paint on Shuri is passable, but definitely a bit rudimentary when compared to something like Marvel Legends.  She could definitely use a little more detailing on the armored parts, but she generally looks pretty good.  Shuri includes her pair of arm gauntlets, which can be slipped over her forearms.  The detail work on them is surprisingly sharp, and the energy effects look pretty awesome.  Definitely better than some gimmicky missile launcher or something.

After seeing the movie, I knew I needed at least some version of Shuri in my collection.  Of course, so did everyone else, so she was a little difficult to find.  Fortunately, when I swung by Cosmic Comix to get my comics the next day, they still had a Shuri figure on the rack, and thus I was able to add her to my collection.  She’s not a perfect figure, and I’m still hoping for a proper Legends release down the line, but this one will hold me over until then. 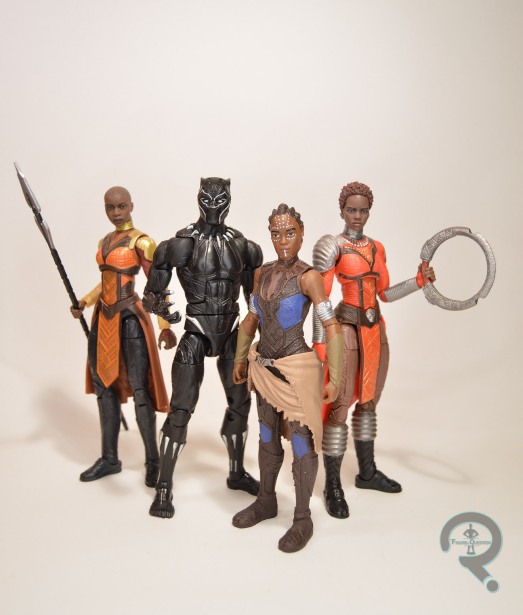