Did you know that wolverines are also known as “quickhatch”?  That’s your fun FiQ fact for the day!  Sorry, the last time I looked at a tiger-stripe Wolverine, I went with this gag, so I’m doing it again.  Aren’t I so clever?

Wolverine hasn’t ever had a true break from Marvel Legends, but he was certainly less of a focus for a few years (being dead might have contributed to that).  But, things seem to be normalizing a bit, and he’s finally re-appearing with fairly regular frequency.  Good for him? 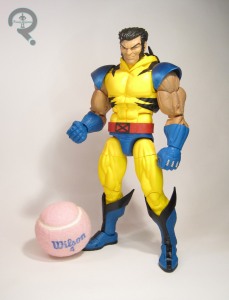 Wolverine is a 2018 release for the 12-inch Marvel Legends line.  He’s done up in Wolverine’s classic blue and yellow tiger-stripe costume, which actually doesn’t have a Legends release in the scale (since the Toy Biz Icons figure was in his Astonishing costume), so it’s a pleasant choice.  It’s also worth noting that it predates the release of the same design in the regular Legends scale for this iteration of Legends, though that’ll be amended later this year.  The figure stands just shy of 12 inches tall and he has 36 points of articulation.  Wolverine is rocking an all-new sculpt, albeit one that is at least a little bit inspired by the smaller scale brown costume Wolverine.  It’s pretty solid overall.  The texture work on his arms, his boots, and his gloves is very impressive, and while the proportions aren’t exactly lifelike, they do match up pretty well with how Logan is usually depicted.  While I like the head sculpt overall (especially the sheer amount of character in the small section of his face we can see), I do feel that the ears of his mask are shaped a little bit oddly.  It’s possible this was caused by some slight warping from the packaging.  Whatever the case, it’s not awful, and it certainly doesn’t ruin the figure.  Interestingly, despite how most figures in this line have been handled, Wolverine’s design is actually unchanged from his comics appearance.  That’s certainly a bold move.  The paint continues this, presenting his costume in all it’s bright, primary colored glory.  It actually works really well with the sculpt, and it’s applied quite nicely.  I particularly like the accent work on the yellow, which helps to prevent it from looking too bland and void of detail.  Wolverine includes an unmasked head and pulled back mask, a set of un-clawed hands, and an extra head and shoulder pads depicting battle damage.  My favorite parts are definitely the damaged bits, as they make for quite a dynamic look for the figure.

Wolverine was a gift from Super Awesome Girlfriend, picked up from the GameStop where she works.  They had gotten this guy in, and I expressed a slight interest, which, as we all know, is really all it takes for her to buy me something.  He adds to my ever-growing 12-Inch Marvel Legends collection, and he continues the trend of them being very, very cool figures.  This is definitely one of the best Wolverines out there.