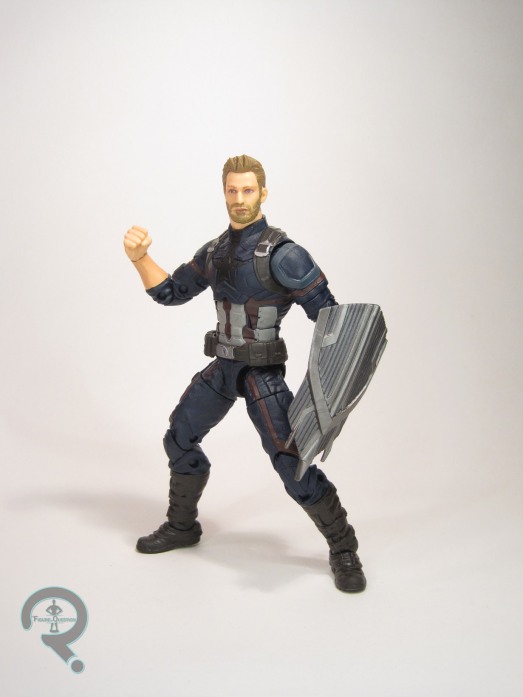 “From the streets of Brooklyn to the intergalactic stage, Steve Rogers defends justice as Captain America.”

Infinity War is here!  Yes, the movie 10 years in the making has arrived.  By the time you, dear readers, read this review, I will have already seen the film, but I’m writing this one in advance.  So, no spoilers or anything to worry about here!  Anyway, I’ve actually managed to track down the last few missing figures from the first assortment of Infinity War-themed Marvel Legends, so, over the course of the next week, I’ll be taking a look at all of those.  Up first, Steve Rogers, the former Captain America!

Captain America is the first figure in the Thanos Series of Marvel Legends.  He’s the first of the four IW-based figures in the series (five if you count the Build-A-Figure), and, like his basic-line counterpart, he’s based on Cap’s “new” Nomad look.  Well, mostly, anyway.  I’ll get to that in a bit.  The figure stands 6 1/4 inches tall and he has 32 points of articulation.  This guy gets an all-new sculpt, which is definitely a positive.  That Winter Soldier mold was great for its time, but was starting to look a little dated.  This figure’s the same height as that one, but he’s been bulked up a little bit more, which prevents him from looking quite as shrimpy as the prior figure.  Overall, I like this new sculpt for this costume, and I’m hopeful that the 10th Anniversary two-pack Cap from later this year will be making liberal use of these pieces.  I do have some slight issues, mostly to do with the IW-specific pieces, and some questionable accuracy.  The first is the head.  By far, it’s the best Evans likeness we’ve gotten from Hasbro yet, and the face in particular is quite well detailed.  The issue lies with the hair, a separate, and going by what we’ve seen in the trailers, rather inaccurate piece. It looks to be the same styling he had in Civil War, when it really should be much longer.  Maybe he gets an important haircut in the film?  I don’t know, but I think it’s more likely Hasbro made a mistake.  Time will tell.  Another slight oddity to the sculpt?  The glove, or should I say lack of glove, on his right hand.  In all the trailers, he’s quite clearly got them on both hands, but this figure’s pulling a Luke Skywalker.  Again, maybe this is to do with something that happens in the film, but it certainly looks off.  His paintwork is overall pretty decently handled.  The uniform is appropriately dingy and dirty, but the application is still clean.  The face uses the face printing technique, and it’s okay, but on my figure it does seem to be a little slight bit off.  Not terrible, though.  Cap is packed with one of his new shields, a pair of fists to swap out for the hands he’s packaged wearing, and the head of Thanos.  Like the basic figure, just the one shield, despite him having two in the trailers, but it’s at least a well-detailed piece.  The hands run into another issue of accuracy.  They’re now *both* ungloved.  Not an issue for his right hand, but since the left forearm has the cuff from his glove sculpted on it, it looks a little odd with the spare hand in place.  Another rather odd choice.

Cap was the first of these figures I was able to track down.  He showed up at Super Awesome Girlfriend’s work, so she grabbed him for me.  He’s not a bad figure, but I will admit to being a little bit let down by him.  Maybe my opinion will change after I’ve seen the movie, and maybe some of Hasbro’s choices will make more sense.  As it stands, he’s certainly far from awful, but I think the basic figure is a bit more faithful to the film.