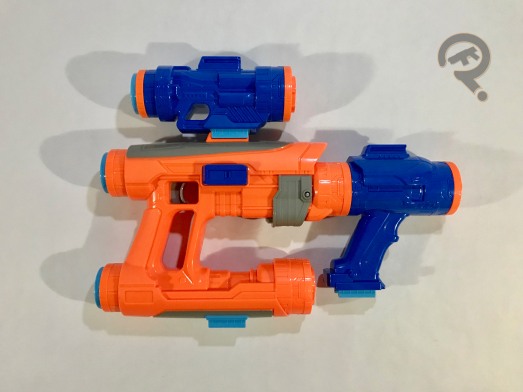 Sometimes performance isn’t the end-all be-all for having a fun Nerf blaster.  If you’ve read some of my earlier posts, you may have seen a review I did way back in the way back for the Star-Lord Quad Blaster.  That’s a great example of fun despite pretty lackluster performance.  Well, today, I’m looking at yet another Star-Lord themed blaster, this time coinciding with the release of Marvel’s latest film, Infinity War.  Now I should warn you, I have seen the movie but I’ll try my best to stay away from spoilers.  Let’s get into it. 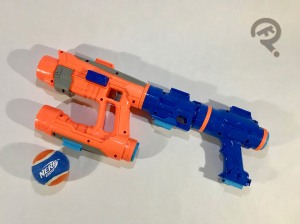 Snape kills Dumbledore.  DAMMIT!  Sorry, I tried.  Anyways, the Star-Lord Assembler Gear blaster kit… thingy was released in 2018 alongside similar compatible kits themed around other characters like Iron Man, Captain America, and Bruce Willis who was a ghost the whole time.  GAHHH! Sorry, sorry.  The idea is that each kit comes with one core blaster component and then a bunch of other parts that can be attached in a number of different ways, kind of like the idea behind the Modulus series, but even crazier.  The blaster piece for the Star-Lord kit has 2 female barrel sockets, 2 male barrel sockets, 3 short little rails, and a rail clip on the bottom.  In addition, the two included extra parts each have a male and female barrel socket and rail and rail clip.  It’s rather a lot, to be honest but it does definitely lend itself to coming up with some pretty crazy combinations which is fun.  It is important to note that the barrel sockets on the Assembler Gear blasters are not compatible with regular Nerf barrel attachments.  It seems the extra parts aren’t really modeled after anything, just shaped vaguely like sci-fi blaster pieces. The core blaster is definitely intended to be modeled after 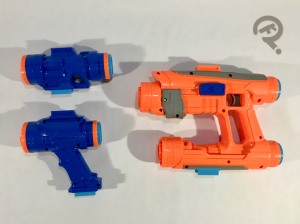 Star-Lord’s signature blaster pistols from the films though it seems like they may have put the top on backwards as it slopes the wrong way.  This could have been an accident or could have been intentional for a number of reasons, but I can tell you it was not so they could fit halfway decent internals in this thing.  The mechanism that launches the dart out of the blaster is the bane of my existence as a Nerf fan.  I can only be talking about the dart flicker style of blaster like that in the Marvel’s Captain America Civil War Iron Man Stark Strike gauntlet blaster… from Hasbro that I looked at a few weeks ago.  I’ve already ranted on this subject before so I’ll spare you, good reader, this time, but it really is just terrible.  One potential argument you could make is that maybe a non-trash based mechanism would take too much space, to which I’d reply “Kevin Spacey is Keyser Soze.”  Then I’d go on to say that maybe scaling up the blaster as a whole wouldn’t be the worst thing in the world because as it is now, the ergonomics are atrocious.  I understand these are meant for children, but so was the 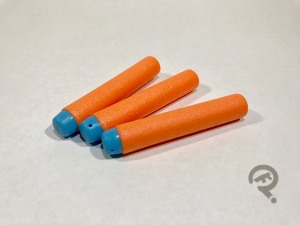 Quad-Blaster and that was perfectly fine to hold.  This, on the other hand, is just not remotely comfortable.  A slightly larger blaster could mean a better grip and halfway decent internals, but sadly, it is not so.  Given the ergo and the performance, I feel justified saying it’s just not worth taking this blaster if you’re planning to bust into your younger siblings’ room and open fire.  Pick something else.  The Star-Lord Assembler Gear blaster kit comes with 2 attachments and 3 Star-Lord colored Elite Darts.

I picked this blaster up on a trip to a local TRU.  I don’t recall if this was before or after the whole going out of business thing took effect, but I had seen them online and was curious enough so I picked it up.  Having done so, I don’t think I can really recommend a blaster this uncomfortable to use with such pitiful performance.  Maybe that’s the point though.  Maybe it’s meant to make you feel like Star-Lord.  Just get your biggest friend to hot glue some Jolly Ranchers to their hand and tell them to start punching as hard as they can while you try and keep them away by shooting.  I don’t see how this could possibly go wrong.

On a side note, I’m pleased to announce that after their hiatus, the fine folks at Timsical Thoughts have partnered with The Blaster In Question to bring you some degree of “content.”  I know the guy who runs the site personally and he’s just great so feel free to check that out.