“When it comes to fighting Evil Mutants, the X-Men know there’s no one better than Wolverine! With his razor-sharp adamantium claws, his lightning-quick reflexes and his unmatched combat experience, Wolverine can outfight anyone! Thanks to his super-fast mutant healing ability, in just a few short hours he’s totally healthy and ready for action again, no matter how serious his wounds!”

Would you believe there was a time when a Wolverine figure was an exciting and new thing?  I know, that’s a bit hard to grasp.  But, until Mattel’s Secret Wars line, there were no Wolverine figures at all.  And that one wasn’t even all that good!  He’d have to wait until 1992 for a second go, courtesy of Toy Biz’s then-newly-launched X-Men line.  He would be the first of very, very many. 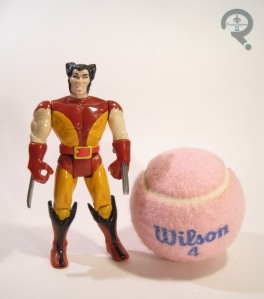 Wolverine was released in Series 1 of the X-Men line.  He was actually unique amongst the 5-inch X-Men figures for being in Wolverine’s brown costume.  It was still his current look when these figures hit (which is more than could be said for a number of his Series 1 compatriots), but it was quickly replaced by the returning tiger-stripe design, which would be the main focus for a good decade.  The figure stands 4 1/2 inches tall (making it one of Toy Biz’s few offerings to truly stick to Wolverine’s proper stature) and he has 7 points of articulation.  His sculpt was new to him, and remained unique for all of Toy Biz’s run.  It’s a pretty decent one for the time.  While it doesn’t quite eclipse the likes of Magneto and Nightcrawler, it’s still really quite good.  The build of the body is probably the strongest aspect; Wolverine figures tend to overlook his distinctive stature, so this one getting it down so well is certainly notable.  The head’s not quite as strong.  This was really the first time that Logan’s hair was translated into three dimensions, so they were still sorting it all out.  It ends up looking a little goofy and sort of impossible, but it’s not terrible.  Wolverine’s paintwork is reasonable, though not anything outstanding.  The base colors are all pretty decent recreations of the comics look, and he’s rather eye-catching.  There’s some unevenness with the lines in a few spots, especially on the torso.  Wolverine was packed with his mask, which works surprisingly well for the scale, as well as a katana.  He was also the first Wolverine to feature the popping claw action, which allowed him to simulate Wolverine’s signature “snikt” move.  It robs his arms of any elbow movement, and the claws are required to be rather small to facilitate.  That said, it works reasonably well, and is certainly fun.

I was too young to get Wolverine new, and he wasn’t one that was prone to showing up later on.  Fortunately, Cosmic Comix had me covered there, and I got this guy not too long after getting into collecting.  He’s actually not a bad figure, and despite the sort of odd removable mask, it was one of the better Wolverines from the line.