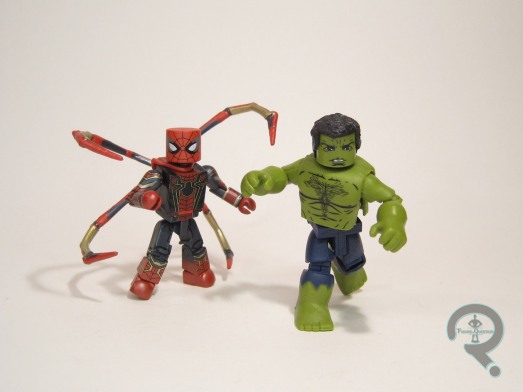 I’m just gonna keep on rolling with this Avengers: Infinity War thing that I got started yesterday, taking a look at another of Diamond Select’s Minimate offerings from the film.  This time around, we’re back to the two-packs, and we’re also looking at two of the film’s heaviest hitters, Spider-Man and the Hulk!

Iron-Spider and Hulk are–or were, I suppose is the better term– the shared two-pack between Walgreens and Toys R Us.  Of course, thanks to TRU’s untimely demise, they’re instead available everywhere, just like the Iron Man and Thanos pack.  As far as pairing goes, they’re not really the most natural choice, but at least Peter and Banner interact with each other at *some* point, even if it’s not in these particular forms.

Peter’s new suit for Infinity War was technically introduced in Homecoming, but doesn’t see any action until Peter winds up in space with Tony and Dr. Strange.  It’s name and Stark-designed nature tie it to the red and gold suit that Peter was wearing for “Civil War” in the comics, but its actual design seems to have more in common with Peter’s more recent Parker Industries-designed armor.  This was more than likely due to them not really wanting two red and gold armored guys flying across the screen doing battle with Thanos.  The figure uses the standard ‘mate body, so he’s 2 1/4 inches tall and has 14 points of articulation.  He gets an additional harness piece, replicating his extra spider-limbs, which also grants him an extra four points of articulation, thanks to the balljoint at the base of each leg.  The piece is new to this figure (since they can’t re-use the comic ones; they only have three legs), and works decently enough.  Sure, it bulks up the neck and waist a bit, and a dedicated torso sculpt would have possibly looked a bit better, but then you’d lack the option of displaying him sans legs, which would be annoying.  Iron Spider’s paintwork is quite cleanly applied.  Not quite as shiny as I might have expected, but still decent looking.  The details are all crisp and well defined, and he replicates the film design rather nicely.  Iron Spider is packed with an extra unmasked head and hair for the Peter Parker look.  It’s sporting a pretty spot-on Tom Holland likeness.  More Spider-Men should include the unmasked head option. 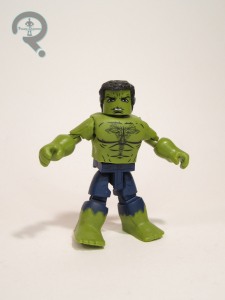 Hulk plays a very, very minor role in Infinity War, being dispatched rather quickly in the film’s opening minutes, and then not really coming around.  So, the fact that he got such a prominent spot here is a little bit baffling, but the amount of Hulk merch out there for this movie suggests that licensees weren’t really told about his small part up front.  Hulk’s construction is pretty much the same construction as several prior Hulk’s.  The only notable change is that this one’s using the hair from Tomb Raider‘s Roth.  Not really sure why, can’t say it’s a favorite, and it ends up just looking kind of goofy, but I suppose worse things have happened.   Hulk’s paintwork is rather on the basic side; his skintone is entirely molded plastic, which is a change from the prior MCU Hulks.  Beyond that, there’s some paint for his pants, and touch of grey on the sides of his temples, because Hulk’s starting to get distinguished in his old age.  He’s also looking a lot more Ruffalo-like than prior Hulks.  Obviously, there’s a lot of Ruffalo in the CG model for Hulk, but this seems to veer far too close to the Bruce Banner side of things.  He doesn’t even look all that angry; he looks more like he’s trying to calculate how much to tip his waiter.  Hulk’s only extra is a clear display stand.

I grabbed these guys from Cosmic Comix when they got the TRU-reject assortment.  I mostly bought this set for Spider-Man, and for that, I’m pretty pleased.  He’s a solid addition to our MCU Spideys, and a solid figure all-around.  Hulk, on the other hand, is really just an odd offering.  Not only his he nonessential, he’s also one of the weakest versions of the Hulk that DST has put out.  I’m not sure what happened with this guy.