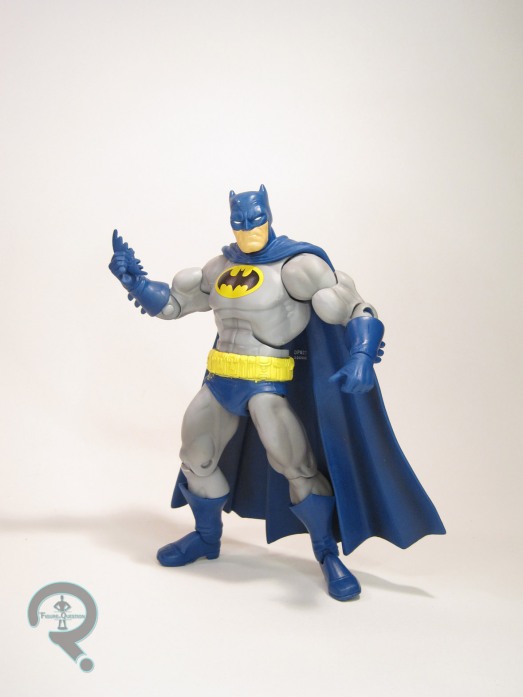 Hey hoooo, it’s a Mattel review.  Haven’t done one of these in a little while.  Ooooooo boy, this’ll go well.

Running parallel to Hasbro’s hit line Marvel Legends, Mattel has their own DC line, DC Comics Multiverse.  It started as a 3 3/4 inch line, before making a jump a few years ago when 3 3/4 inch figures were largely dropped by the toy industry.  One of the earliest offerings from the reformed Multiverse was a set of commemorative figures celebrating the 30th anniversary of Frank Miller’s The Dark Knight Returns.  Of the three figures offered, I’ve looked at two.  Today, I’m looking at the last of those three, Batman himself!

Batman was a Walmart-exclusive release from the DC Comics Multiverse line.  The figure stands 7 inches tall and he has 25 points of articulation.  Batman’s actually just a slight retooling of an earlier Batman Unlimited Dark Knight Batman, with a new head.  By extension, that means he shares a lot of pieces with the DKR Superman I looked at back when they were first released.  It’s very similar to the Masters of the Universe Classics base body, but Mattel to this day insists they are completely separate molds.  I guess I just have to believe them.  It works well enough for what they’re going for.  Obviously, it doesn’t really look that much like Frank Miller’s artwork, but it melds decently enough with the DCUC style that Mattel was trying to carry forward.  In the context of the whole MotU concept, and even Superman to a smaller degree, the body works, but for Batman, it feels a little….lumpy?  Balloon-y?  I don’t know.  It just feels somewhat off.  The new head goes for a more reserved look than the prior DKR Bats, though he’s still a little grumpy.  I think it’s perhaps a little large for the base body, and it’s definitely on the softer side.  Compared even just to the other two figures from this same assortment, it looks rather off, as both Superman and the Son of Batman figures have much crisper details.  Batman’s sculpt has a quality not unlike mashed potatoes, if I’m honest.  It’s kind of lumpy and ill-defined, even by Mattel standards.  Also bad even by Mattel standards?  The paint.  Sloppy doesn’t begin to describe it.  It looks like the yellow paint was applied from across the room.  It’s just everywhere.  His logo’s at least not terrible, but the general lack of paint overall just makes the rest of the mistakes that much more noticeable.  Batman was packed with a single accessory: one lone batarang…with “CHINA” stamped on one side.  Apparently he gets all those wonderful toys from China.  Who knew?

So, I bought the Superman figure at full retail, and I liked him well-enough.  And I got the Son of Batman for a decent discount, and he was alright.  I already had the Unlimited figure of this guy, though, so I wasn’t in much of a hurry to get him.  I ended up buying him *not* from Walmart at all.  I instead found him at an Ollie’s, for $3.  That was enough to get me invested.  I gotta say, I’m really glad that I didn’t pay full price for him, because…well, he’s just not that strong a figure.  I guess I’ve had worse figure, but there’s not a lot that this figure does right.