Happy Days.  Now there’s something of a change in direction for this site, which tends to be more sci-fi and comics heavy (with the occasional guest appearance from Freddie Mercury).  Well, believe it or not, it’s not the biggest stretch.  Back in the ’70s, Happy Days was one of the many properties offered by Mego, and I’ve been a pretty big Mego fan since I was very small (which was, admitedly, about 20 years after their heyday).  In the last decade, there have been a few attempts at reviving the Mego-style, to varying degrees of success, under a number of different names.  The latest relaunch, however reclaims not just Mego Corp’s name, but also brings in its former co-founder and CEO, Marty Abrams, as well as a spot at mass retail.  There are plethora of licenses being offered up, including Star Trek, I Dream of Jeanie, Cheers, Charlie’s Angels, Married…with Children, Charmed, The Brady Bunch, The Facts of Life, and the previously mentioned Happy Days.  I’ll be looking at Happy Day’s break-away hit character Arthur “Fonzie” Fonzarelli today!

Fonzie is one of the 11 figures single-packed in the first wave of the new Mego product launch.  He will be followed in subsequent waves by Richie and Joanie Cunningham.  As of the first of this month, he and his compatriots are available exclusively at Target.  Time will tell if other retailers get on-board.  Fonzie is seen here in his classic leather jacket, just like on his original Mego figure.  The figure stands 8 inches tall and he has 16 points of articulation.  Fonzie is built on the re-engineered Mego Type 2 Body, first seen on DST’s Retro Marvel figures.  It maintains the aesthetic of the classic body, while affording the figures a more sturdy build, and less chance to break in the long-run.  It also adds a fair bit of heft to the figure, for what it’s worth.  Fonzie uses a re-tooled version of the original head, which is a pretty good match.  It’s got a decent likeness of Henry Winkler as the Fonz, which is really the most important thing.  The paintwork on the head is fairly cleanly applied; the eyes are perhaps a touch high on the sculpt, but not terribly so, and they certainly aren’t any worse off than a vintage release.  Otherwise the application is quite sharply handled.  I feel at this point I should touch on the color disparity between the skin tone on the figure’s head and hands.  While it’s quite noticeable in the photos, it’s actually almost impossible to tell in person.  Just one of those camera lens vs human eye things.  Fonzie’s outfit is made up of five pieces, for his jacket, t-shirt, jeans, and boots.  They’ve been changed up a little bit from how the original figure handled them.  The boots, which are molded plastic, are actually about the same.  They fit over the feet just fine, and they have extra detailing for the laces and such.  The jacket is made of a slightly thicker material than before, no doubt to help it last a bit longer.  It also uses velcro in place of the button that kept the original closed, once again, for better durability.  The shirt is actually a t-shirt this time, sleeves and all, which is certainly a nice change from the original.  The jeans are the closest match, but they’re definitely a case of if it ain’t broke, don’t fix it.  Fonzie lacks the thumbs-up feature of the original figure, but makes up for it by adding a hair comb, which is a very Fonzie sort of accessory.

Full disclosure: the Fonzie figure I’ve looked at here was sent over to me for review by Mego Corp, in order to help promote their new line.  I didn’t get to choose which figure I was getting, but I can’t really complain about the end result.

I’m a long time Mego fan, and I’ve always tried to do my best to support all of the various ventures that have attempted to revive the style.  This one really seems to have the polish and up front work to go the distance, so here’s hoping.  Fonzie himself is a decent recreation of the original figure, with enough changes to help update him and make for a longer lasting figure.  I definitely look forward to tracking down more of the first wave, and seeing what Mego has in store going forward. 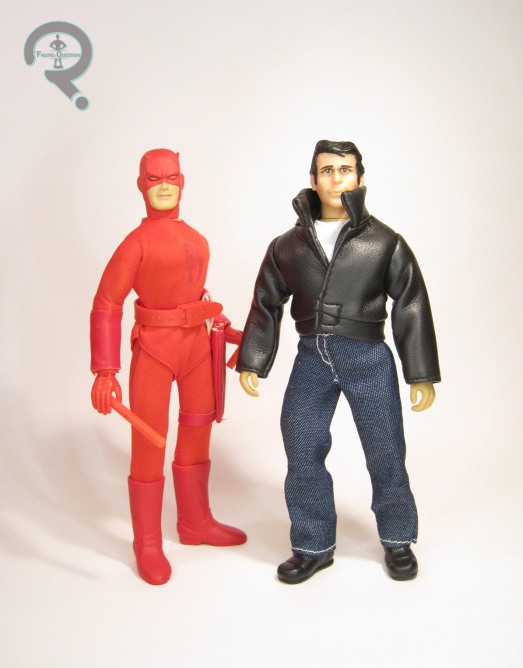