Shadowland is an event I think most of us would like to forget, and most of us kind of have.  However, the event is notable for a few of the good things that came out of it.  Firstly, it led to a hard relaunch of Daredevil, thus giving us Mark Waid’s phenomenal run on the character.  Secondly, it gave us Marvel Minimates Series 38, which, despite its questionable origins, was a pretty exciting assortment, at least at the time.

Shadowland Iron Fist and Big Time Spider-Man were available in both the 38th specialty series and the tenth Toys R Us-exclusive series of Marvel Minimates.

This was only Danny Rand’s second Minimate, hitting shelves a whopping 7 years after the first. By this point, the character had been successfully re-launched by Matt Fraction and David Aja in the pages of Immortal Iron Fist, so a new version was overdue. DST took advantage of his appearance during Shadowland to finally get us Danny’s current (at the time) design.  Iron Fist used add-ons for his mask, sash, and wrapped hands.  The sash was re-used, though not from the original Iron Fist as you might think.  Instead it came from the PX-exclusive Dark Phoenix, which had a much more simplistic piece.  Honestly, I think I’d have preferred the old Iron Fist piece, which had more detailing, but I guess a sash is a sash.  The mask and hands were new to this guy.  The mask actually gives Danny hair and ears, unlike the first one, and is generally just a solid piece (hence why it’s still in use another 7 years later).  The hands, on the other *hand* (heh), I’ve never been much of a fan of.  They’re just oddly shaped, and definitely far too long and skinny.  I think the wraps would have looked better as a painted on detail.  The paintwork on Iron Fist is actually surprisingly dull.  Like, I get wanting to maybe downplay the colorfulness of the costume a little bit, but this always seemed to take it a little far.  It still looks fine, though, and I suppose isn’t too far off from how he looked during the Immortal Iron Fist run.  I’ve always found the face to look a little old for Danny.  I think there are a few too many lines.  With the mask on, he looks decent enough, though.  The one detail that really frustrates me is that his sleeves go all the way down to his wrists.  He had extra unwrapped hands to swap out, but without the exposed skin on his forearms, he just ends up looking wrong.  In addition to those previously mentioned extra hands, Iron Fist also included a hair piece for an unmasked look (re-used from Series 27’s Ultimate Iron Man) and an energy effect piece for his “iron fist.” 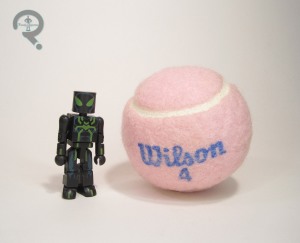 Right around the same time that all that crazy stuff was going on in Daredevil, Dan Slott began his legendary run on Spider-Man, kicking things off with a storyline titled “Big Time,” which finally brought the focus back to Peter Parker’s prowess as an engineer.During the story, he starts building newer, more advanced Spider-suits, including the stealthy suit seen here. Though the suit was rather short-lived, it was a very sleek look, calling back to the fan-favorite symbiote design, as well as throwing in a bit of Tron for good measure, so it had a lasting impression with fans. This would be the first of a handful of figures based on this costume. This Spider-Man, like a lot of Spider-Men, is a completely vanilla ‘mate, making use of no extra add-ons or anything.  It’s nice to get the occasional vanilla ‘mate to remind you of how good the standard body is.  All of the important details are handled via paint, which is handled pretty well overall.  The slight highlights are a very effective way of detailing the all-black suit, and capture Humberto Ramos’ illustrations of the suit well.  My only complaint is the shade of green used; I think something brighter would have popped more against the suit.  It’s not bad as is, but it could be better.  Spidey was packed with a web-line piece.  It’s the same piece used with other Spider-Men, but molded in translucent yellow plastic, which gives it a nice, unique feel.

Iron Fist was a much anticipated figure, but also a somewhat flawed one.  It fixed some of the issues from the first Iron Fist ‘mate, while at the same time introducing new ones of it’s own, making the whole thing a bit of a wash.  The later Best Of version ended up being the one most of us were actually waiting for.  Big Time Spider-Man is one of my favorite Spider-Man designs, and this ‘mate does a pretty exceptional job of translating it into plastic.