“When Peter Parker was bitten by a radioactive spider, he gained all of the arachnid’s abilities and became the amazing Spider-Man! But when even these powers aren’t enough, Spidey dons his patented Spider-Armor! This ceramic-metal battlesuit protects the web-slinger from all manner of attacks – giving Spidey the added time he needs to take it to the bad guys!”

Before devolving into some truly ridiculous variants of the title character (“who doesn’t want a deep sea fishing Spider-Man?”), Toy Biz’s 5-inch Spider-Man line actually worked pretty hard at releasing sensible variants of its main character, ones which would appeal to fans and kids alike.  One such release is actually one of my very favorites from the whole line, Spider Armor Spider-Man! 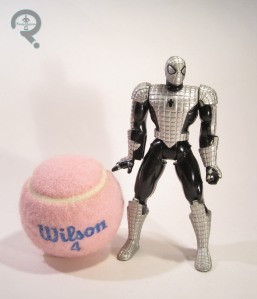 Spider Armor Spider-Man was released in Series 3 of Toy Biz’s Spider-Man line.  He was one of two Spidey variants in the assortment, with the other one being the more straight-forward super posable Spider-Man.  This figure is based on Spidey’s armored appearance from Web of Spider-Man #100.  The same design would also appear on Spider-Man: The Animated Series, as a Tony Stark-inspired alternate universe version of Spider-Man.  The figure stands 5 inches tall and has 8 points of articulation.  Thanks to an action feature, his right arm lacks any sort of elbow articulation, which makes the figures a little bit on the stiff side.  In fact, the way the articulation and the sculpt interact, the whole figure really does look rather stiff.  That’s fair, I suppose, given his armored nature, but still slightly frustrating.  The sculpt on this guy was all-new, and would see re-use for a handful of repaints down the line.  Aside the stiffness thing, it’s actually pretty good.  The bulked up look differentiates him from the average Spidey, and for once the sculpted web-lines actually make sense, and look quite decent.  The paint work on this figure was pretty basic, and rather monochromatic, in keeping with the design from the comics.  It’s black plastic with silver paint.  Voila!  The silver paint on my figure is a bit worse for wear these days, the figure having seen some decent play back when I was a kid.  Spidey was packed with a “Super Web Shield,” which could be either mounted on his left arm, or launched from the launcher built into his right.  The launching feature’s not all that impressive (it’s the same gimmick used on Professor X and US Agent), and I’d really rather he just din’t have it, but oh well.

I vividly remember watching the Spider-Man: Animated Series finale that introduced this guy back in the day.  I had all of the other Spider-Men from the crossover, but this guy seemed the coolest.  Of course, he was gone from regular retail by that point, and the toy aftermarket wasn’t yet what it would become.  I did eventually get the little metal figure to hold me over for a little while, though.  This guy would eventually make his was to my collection via KB Toys’ liquidation center, which my Dad and Grandmother took me to once, back in the 2002, I believe.  After searching to no avail for this guy for a couple of years, I found a literal wall of him at that location, which was definitely a thrilling experience for me.  He’s not a perfect figure, but he’s certainly a very cool one, and I’m still very happy to have him in my collection.