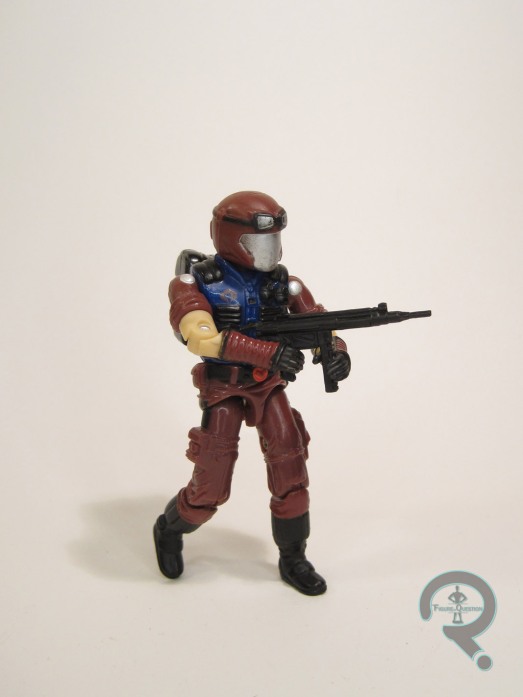 “Vipers are the backbone of the COBRA Legions. They are the bottom of the pyramid, which leads to the hierarchy of material wealth and power within the organization. When COBRA received word that G.I. Joe operations had been shut down by U.S. Government, he promptly began recruiting more soldiers. Within weeks, the most cruel, greedy, back-stabbing lot – joined the ranks; tripling the original size of their ground forces. All Vipers are issued a combination assault rifle/grenade launcher, along with a three day field pack. Multi-layered body armor and wrap-around acrylic/composite helmets with built-in radio telecommunications gear are standard issue. This equipment and a bad attitude makes them very dangerous opponents. Vipers are highly motivated, and superbly trained. However, to make them follow orders, the punishment for failure is to be left on the battlefield when the B.A.T.S. (Battle Android Troopers) are deployed. This is due to the fact, these Androids are programmed to shoot and incinerate anything that moves in front of them. That is the last thing any Viper would want, better to take his chances with the real enemy. Vehicle Specialty: COBRA Flight Pod a.k.a. “Trouble Bubbles.””

Man, Hasbro really likes that thing about the Vipers being the backbone of the organization, don’t they?  It’s the Day of the Vipers part 3!  The Vipers, having been a regular feature of the line, made a reappearance every couple of years.  After 1989’s Python Patrol offering, the Viper’s tried out that bright colors thing in 1990, and then got their second new mold in 1994.  The less said about the latter, the better.  Fortunately, it was more or less a return to form for Version 5 of the Viper, which I’ll be looking at now! 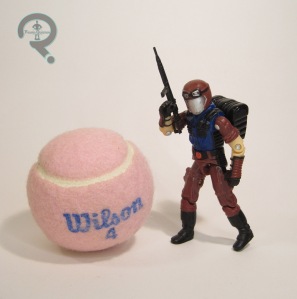 The Version 5 Viper was released in 1997, the 15th Anniversary of the A Real American Hero incarnation.  After a three year absence from stores, G.I. Joe returned, albeit in a slightly different form, all under the heading of The Real American Hero Collection.  The Viper found his way into one of the three Mission Packs, where he was released alongside one of the Flight Pods, or “Trouble Bubbles”, mentioned in the bio.  This figure marked an important change for the Vipers.  He uses the same upper body as the original figure, but for the first of many releases, the Viper is actually sporting the legs of the B.A.T., rather than the proper Viper gear.  In the years since the original mold Viper had been seen, it seems the mold for his legs had been lost, necessitating a replacement.  The B.A.T. legs work in a pinch, I suppose, though it does mean this guy ends up with a really squared-off backside.  He also got a brand new paint scheme, almost an inversion of his original.  It’s predominately a brownish red, with a blue vest.  It’s ugly is what it is.  Perhaps its due to my figure not being in quite as good shape as the other Vipers, but he just feels kind of washed out, ratty, and generally not as cool.  He reminds me of a supermarket on a Sunday morning.  He’s all florescently-lit, and pale, and full of that oddly dark and murky sort of despair…sorry, I went a very specific place there, didn’t I?  The V5 Viper mixes up things slightly on the accessory front.  He gets the same backpack as before, but a new, slightly less distinctive, sub-machine gun as his firearm.

The V5 Viper was not on the list of ones I was really looking for.  Truth be told, I didn’t actually know he existed.  But I found him while digging through all those Joes that All Time just got in, and at that point I was just too far into the Viper’s Den to say no.  He really lacks the flair of the last two, and I’d have preferred to find the V3 release, but another Viper’s another Viper, right? 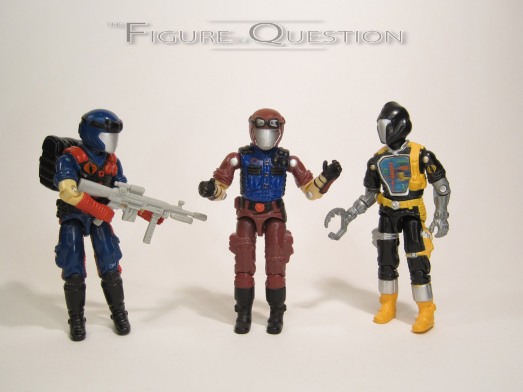