How about a little history lesson?  So, after pioneering the whole action figure thing in 1964, Hasbro ran into a bit of troublesome territory after the fallout of the Vietnam War changed the public perception on war and the military.  Their up to that point very military-driven line was now out of vogue, necessitating a change.  In 1970, they introduced Adventure Team, an pulpy-action-adventure-inspired toyline that would breath another six years of life into the line.  Around the same time, Mego was looking to get into the newly-established action figure world, and aimed just a bit shorter than Hasbro’s market.  4 inches shorter, to be exact.  Action Jackson offered a cheaper alternative to what G.I. Joe was doing, a base figure for whom you could purchase sets of accessories, at a scale 4 inches smaller.  Unfortunately, Action Jackson was largely a commercial failure, but in a much more fortunate turn of fate, it was Mego’s desire to make use of the Action Jackson body molds that lead to the creation of their World’s Greatest Super Heroes line, and their eventual path to being one of the biggest toy companies in the market for the better part of the decade.  Now that Mego’s returned to store shelves, they’ve paid homage to the little guy that started it all, giving us a brand new Action Jackson. 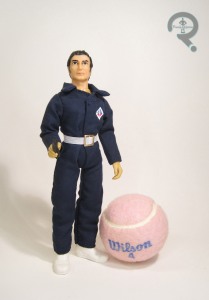 Action Jackson is another of the 11 single-packed figures from Mego’s first wave of their TV Classics line-up, though he doesn’t quite as much fit that descriptor.  I guess he’s just sort of along for the ride.  I’m not complaining if you aren’t.  The figure stands 8 inches tall and he has 16 points of articulation.  He uses the same re-tooling of the Type 2 body that Fonzie was using, which is quite amusing to the toy nerd in me, since the original Jacksons were all on the Type 1 body.  Jackson uses a re-tooling of the original clean-shaven caucasian Jackson head, which was the most common variant originally.  This newer version is a much cleaner and polished sculpt than the original, thus allowing for Jackson to look more at home with his compatriots.  The paintwork is on-par with the Fonz, though I don’t think it’s quite as strong as Norm’s was.  Still, it’s certainly a passable piece of work.  Jackson’s costume is made up of four different pieces.  He’s got his jumpsuit, his belt, and his boots.  They’re more-or-less the same pieces as the vintage counterpart, slightly tweaked to better fit the Type 2-style body, and to remove the metal snaps and replace them with velcro.  The original Action Jackson was sold sans accessories, in order to encourage buyers to get one of the accessory sets, but the new Jackson is packed with a handgun, which, thanks to the newer-syle hands, he can still hold halfway decently.

There were the remnants of an Action Jackson amongst my dad’s Megos I played with growing up, which introduced me to the concept fairly early on.  However, being born 20 years after they were on store shelves, find a vintage one was never really an easy prospect.  I will admit that I when Mego sent me a review sample, I was secretly hoping it would be Jackson.  Since that wasn’t the case, I tracked one down from a near by Target a few weeks back.  Like the other two, he’s a solid, fun figure, and I’m quite glad to have him.  Now, here’s hoping for the other two head variants down the line!