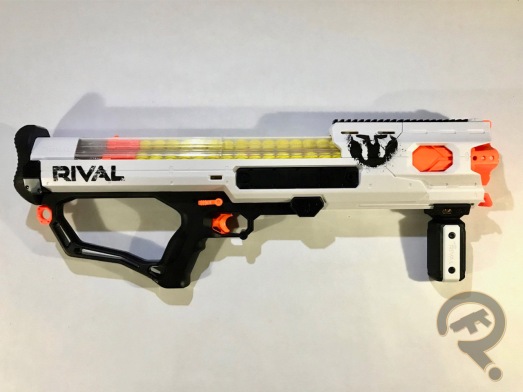 Sometimes you don’t need to make something entirely new to end up with something really good.  Sometimes you just need to take something promising, and tweak it just a bit, then double its capacity and add a shoulder stock.  And presto, its as easy as that.  At least, it is if you’re Nerf, because that’s exactly what they did to bring us this week’s blaster, the Hades.  Just imaging James Woods is reading this review to you.

The Hades XVIII-6000 was launched in 2018 as the main spring-powered blaster in the Rival line’s fall quarter releases.  It features a hefty 60 round capacity tacked on to pretty much the exact same system as the Artemis XVII-3000, which used a pump action, rotating barrel mechanism to continuously feed rounds into the chamber.  With the integral magazines laying parallel to the blaster body, it’s a very streamlined layout that yields a high capacity for the size.  The Hades’ shell seems to be all original even with its similarities to the Artemis.  Thinking the Artemis might be better suited to the name Persephone, personally.  As mentioned before, the Hades has double the capacity of the Artemis and actually has a shoulder stock, making it more of a rifle.  Like the Artemis, the Hades’ pump grip is kid of an odd shape, in my opinion.  It’s not really shaped to the human hand, it’s just sort of there.  That’s really my only complaint with any weight behind it, anything else from here on out is really just nitpicks.  For instance, While I’m happy about the inclusion of a shoulder stock, I think the pistol grip is a little too far back as it makes the respective distances from off hand, to shooting hand, to shoulder a little wonky.  I think it would be as simple as moving the pistol grip forward just a couple inches to make it really nice, but I acknowledge its a highly subjective opinion to have, so not everyone will experience the same thing.  Additionally, I’m a little bummed that Nerf has gotten into the habit of leaving iron sights off of Rival blasters for a while now.  Sure you can use the red dot sight they make, and even such, sights don’t really help on a Nerf blaster, but I really enjoy when they are there.  As you’d expect from a Rival blaster of this size, the Hades hits pretty hard.  Pair that with the capability of slam-fire and you’d better be really sure your younger sibling deserved it before you bust into their room and start blasting away.  I believe the Geneva Convention lists an unprovoked attack from the Hades as a declaration of war, so keep that in mind.  If you do take that route and need to rearm, you reload the Hades by sliding the top cover all the way back to the stock and loading rounds into the ports on the top sides of the magazine tubes.  The Hades comes packaged with 60 Rival rounds in standard yellow, as well as blue and red team indicator flags.

A common misconception that a lot of people have about Hades is that he wasn’t really a villain.   He was just kinda grumpy and could be a little frightening due to the nature of his job.  And I’d say that’s an apt description of this blaster.  It’s a really good blaster, like, you should go buy one.  It just depends which side of it you find yourself on that determines how frightening it is.  I guess I didn’t really write this to sound like James Woods very much, just replace some of the verbs with “schmooze” and I think that should do it. 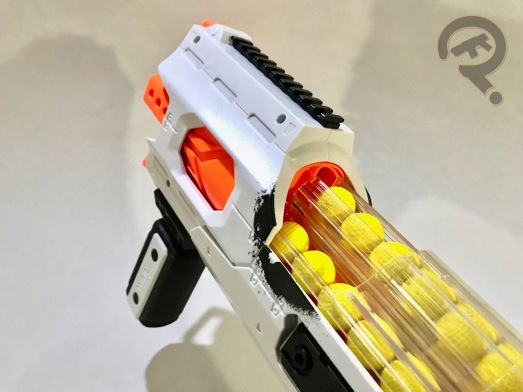