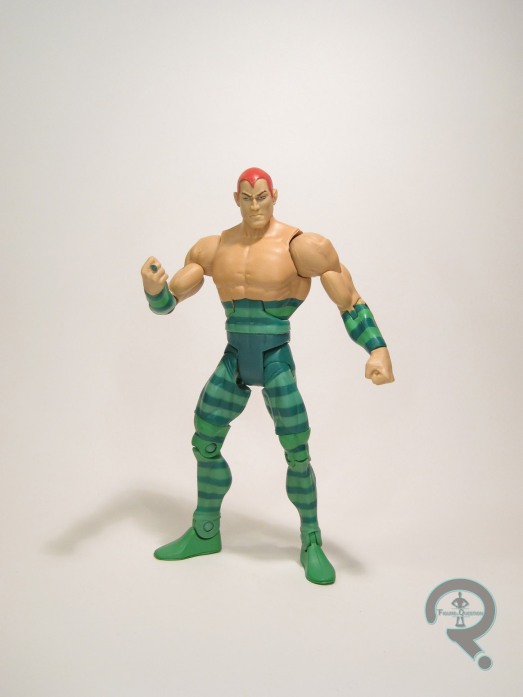 “Amazo is a powerful android capable of absorbing and mimicking the superpowers of the members of the Justice League of America. “Absorption cells” allow Amazo the ability to duplicate the power of any superhero he encounters, but is only able to use the powers of one super hero at any given time.”

Hey, this is convenient timing.  Just last week, the CW tv shows did their annual crossover event, “Elseworlds,” the first part of which prominently featured today’s figure in question, Amazo.  Amazo’s not a stranger to popular media, having previously appeared in both Justice League and its sequel series Justice League Unlimited.  That being said, JL and JLU rather drastically shifted the character’s design, so the casual fan might be forgiven for not quite making the connection.  “Elseworlds” used a variant of the classic design, which was pretty darn cool if you ask me.  Amazo’s actually a fairly frequent choice for various DC toy lines, including Mattel’s DC Universe Classics.

Amazo was released in Series 5 of DCUC.  It was a noteworthy series for the line, as the first Walmart-exclusive assortment and, by extension, the first assortment carried in Walmart.  It was also our first real taste of some of the worst the line was going to serve up to us, with accessories cut at the last minute, horrible distribution, and some pretty awful quality control.  Walmart had requested the assortment be produced as cheaply as possible, and Mattel delivered.  This figure stands 6 1/2 inches tall and he has 25 points of articulation.  Amazo’s a little on the small side for most depictions of the character, thanks to his sticking to the main male base body, another symptom of this assortment’s general lack of newer parts.  Amazo’s actually got one of those: his head.  It’s pretty basic, but matches the classic Doc Savage-esque design he’s been sporting for fifty some years.  He also gets the right hand from Green Lantern, since he’s typically seen replicating the ring.  It’s a sensible choice in theory, though in practice it means he has wrinkles on his hand, since the original piece was gloved.  I suppose it’s easy enough to explain away, what with him being an android and all.  Amazo’s paintwork is decent enough.  They’ve gone with his original costume, which is sensible, since it’s the most easily conveyed with just paint.  While my other Series 5 figure, Black Lightning, was all over the place in terms of paint quality, Amazo actually manages to keep it pretty clean and consistent.  Some of the stripes, especially at the top, are a little wobbly, but I’ve certainly seen worse.  Amazo was packed with one of the pieces to the Series 5 Collect-N-Connect Metallo…and that’s it.  Nothing character specific.  Not even the Wonder Woman lasso that they already had tooled for Series 4.  Sadly, Amazo was not alone on this front; there was exactly one proper accessory among all of the Series 5 figures.

Series 5 was legendarily hard to find at retail, with many regions reporting a single case of figures being put out, if any arrived at all.  Needless to say, I didn’t find a single one of them at retail.  To be totally fair, the line-up was so-so enough that I didn’t really look too hard, but I’ve warmed up to some of them over the years.  So, when All Time Toys got in someone’s DCUC collection and I fished Amazo here out of the bin, I was a pretty easy mark.  He’s an okay figure, but nothing to really right home about.  That said, he’s also a lot less flawed than I’d expected, given the assortment that spawned him.

Obviously, I bought All Time’s only figure of this guy, but they have a whole bunch of other DCUC figures listed on their eBay store.  And, if you’re in the market for something newer, please check out their website as well!