It’s an event seven days in the making!  What’s that?  Seven days doesn’t make for much making?  I mean, I guess…

Wilson Fisk, better known as Kingpin, isn’t historically the most toyetic character.  He’s a chubby guy in a suit.  Doesn’t scream fun.  But, he’s an important character, both to Spider-Man and Daredevil, and is definitely one of the Marvel universe’s best villains, so he gets his toy due from time to time.  The advent of Build-A-Figures, especially in their current incarnation, is well suited to his sort of character, making him a natural choice for the latest round of Marvel Legends. 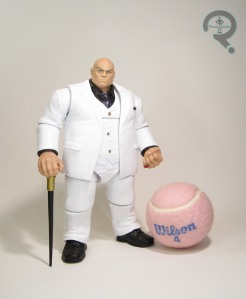 Kingpin is the eponymous Build-A-Figure for the Kingpin Series of Marvel Legends.  Believe it or not, this isn’t his first time as a Legend; Toy Biz released a figure if him (as well as a variant version) alongside Daredevil in their “Face Off” sub-line from 2006.  That figure is still considered one of Toy Biz’s finest, but I think an update was certainly needed.  The figure stands 7 1/4 inches tall and he has 27 points of articulation.  He’s sporting an all-new sculpt, which is really to be expected.  How many guys have Wilson Fisk’s physique? Given Hasbro’s propensity for re-use, I imagine we’ll be seeing at least some of these parts crop up again, though the whole body getting a re-use seems unlikely.  Regardless of re-use potential, there’s no denying that this is a well-crafted sculpt.  The suit is nicely defined and very sharply tailored, and the articulation is fairly cleanly worked in.  Impressively, the articulation is still quite functional; obviously, his

design restricts movement a little bit more than smaller figures, but for him it’s all very useful.  There are two different heads included for the figure, depicting Kingpin in his two best known moods: calm and raging.  Both heads are nicely defined, and open the figure up to a great variety of posing options.  The calmer head is my personal favorite of the two, but I definitely like both of them a lot, and I appreciate how consistent the features are between them; these are very clearly the same guy.  The paintwork on Kingpin is basic, but very well implemented.  The application is clean, and the white and black look shows a nice contrast.  He doesn’t have the wacky purple pants that I’ve become accustomed to, but he’s clearly a more modern take on the character.  Purple pants just won’t do anymore.  In addition to the extra head, Kingpin also has his diamond-topped cane.  He has a little trouble securely holding it, but it does look really nice when balanced between his hand and the floor.

Without a doubt, Kingpin was the selling point for this whole assortment of Legends.  I never got the Face-Off release, and I’ve been wanting a good representation of Fisk in my collection.  The individual figures we’re pulling me in when they were shown off, but as soon as I saw this guy, I knew I was in fore a whole set.  He did not disappoint, and he’s definitely put the 2019 Build-A-Figures off to a great start.

In a similar fashion to the Venom Series from last year, this line-up has been an odd one for me.  There were no clear-cut standouts like there have been in prior sets, and I can’t really put my finger on any of them as being “must-have” (apart from the BaF, of course).  That said, with the exception of the Red Goblin figure, I was pleasantly surprised by every figure in this assortment.  I may not have wanted them at the start, but Hasbro sure made me glad I got them all.  If you’re interested in getting a set of your own, all seven of the single figures are still in-stock at All Time Toys’ webstore.  And, as always, if you’re looking for other toys both old and new, please check out All Time’s website and their eBay storefront. 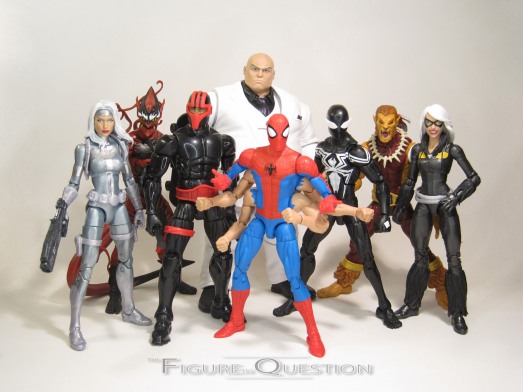