Hey, do you guys remember yesterday’s whacky pairing of two guys from Captain Marvel that never meet?  Well then you’ll love today’s pairing of two other guys from Captain Marvel that also never meet.  Though, I guess in a slight uptick of connectivity, at least these two do occupy the same planet at the same time, which is more than yesterday’s pair.  Maybe they formed a budding relationship off-screen!  Well, let’s look at best buds Yon-Rogg and Phil Coulson.  Nope, that feels wrong.  I don’t think these guys are friends.  Let’s look at mortal enemies Yon-Rogg and Phil Coulson.  There, that feels better.

Yon-Rogg and Coulson are the last of the Walgreens-exclusive Marvel Minimates for the Captain Marvel assortment.  There’s also going to be a specialty-exclusive boxed set, but these are it for now.

Man, we were really itching to find out what Yon-Rogg’s big secret was before the movie came out.  Turns out the big secret was that there was really no big secret, aside perhaps from this version of Yon-Rogg somehow ending up as less villainous than his comics counterpart.  Honestly, though, it feels like they came up with the role for Law without knowing exactly which Kree officer he’d be playing, and eventually decided to tag him with Yon-Rogg’s name (the fact that said name is only spoken once in the film, said in a scene where his character isn’t even present kind of lends credence to this).  Whatever the case, he’s a pretty prominent character, and obviously he was going to show up somewhere in this line.  He makes use of add-on pieces for his hair, backpack, gloves, belt, and holster.  The hair is reused from Venkman, but otherwise these pieces are new.  At first glance, the holster looks the same as Korath’s, but it’s actually its mirror piece, correctly representing their placement in the film.  Like Carol, Yon-Rogg also includes an alternate helmet piece, should you want him fully armed up.  But, given how briefly he wears it in the movie, I don’t see it getting much use from me.  Yon-Rogg’s paint is pretty involved, and matches up with Carol and Bron-Charr (but not with Korath and Ronan). The face has a pretty solid likeness of Jude Law, which is certainly refreshing after the Legends figure.  Yon-Rogg is packed with a pistol, an effect piece for his weird gauntlet thing, and a clear display stand. 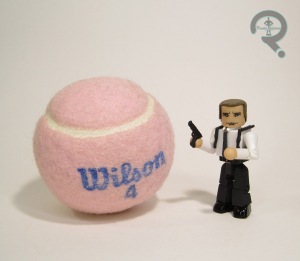 Though relatively minor in the film, Coulson’s return to the MCU proper was still a delightful one, and Clark Gregg was clearly having a blast playing the rookie field agent version of the character.  His presence in this assortment is no doubt due to the large fanbase for the character.  He’s not new to Minimates, with an MCU release back in Series 39 for the first Thor film (reviewed here), plus animated and comics versions of the character.  That said, it’s nice to get another go at him, if for nothing else than to pair off with Fury.  Coulson is pretty much the same as Fury in terms of construction, just swapping out the hairpiece for a new one, representing Coulson’s ’90s hair.  Of course, it’s nondescript enough to work for a modern Coulson as well, if that’s what you’re looking for.  Coulson’s paintwork is respectable.  I think the facial likeness is better than prior attempts, and I especially like the different pattern on the tie.  Like Fury, Coulson is packed with a spare set of white arms, a handgun, a shoulder holster, and a clear display stand.

Though they don’t offer much new after looking at all of the other figures in this line-up, I do find myself quite liking this pair.  It’s nice to get a Yon-Rogg figure that isn’t horribly disappointing, and I’ve been hoping for a Coulson update since The Avengers came out.  All in all, a nice pair to round out a pretty fun little assortment.  I look forward to the boxed set.