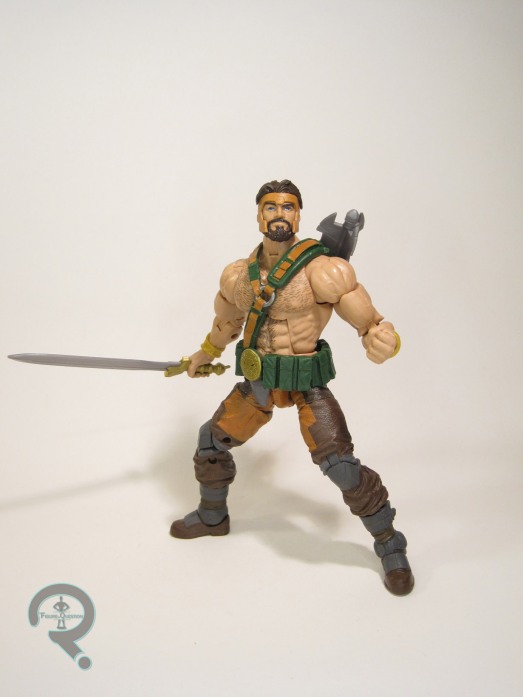 “An immortal champion of Olympus, Hercules uses immense strength to battle evil and protect the world.”

Honey, you mean “Hunk-ules!”…wait, sorry, sorry everybody.  Wrong Hercules.  My bad.  Pack it back in, let’s regroup….Although, I do feel the need to point out that both Herculeses in question are owned by Disney, so you can forgive my confusion.  Today’s Hercules is officially of the Marvel branding, introduced by Lee and Kirby during their run on Thor.  He’s been a mainstay of the Marvel Universe since the ’60s, but has actually been a slightly rare occurrence as a toy.  Toy Biz, for all their Marvel stuff they did, never released a single figure of Herc, and even Hasbro’s have been few and far between.  Their first Herc was a Legends release, as part of their very first series, all the way back in 2007, and now their finally replacing him with an update, 12 years later.

Hercules is figure 6 in the first series of Endgame-themed Marvel Legends.  He’s the last of the four comics figures, and also the last single-packed figure in the series.  As a full-fledged Avenger for many years, Herc is definitely the most natural choice of the comic-based figures in the line-up.  Herc is based on his most recent appearances, from around the time of Avengers: No Surrender.  It’s really not too far removed from his classic appearance, with the only prominent change being the addition of pants and boots.  I’m not super crazy about the man-bun, but worse things have happened.  The figrue stands 7 inches tall and he has 34 points of articulation.  Hercules is an all-new sculpt, which was honestly a little bit of a surprise to me, since I’d kind of been expecting the Hyperion body to be trotted out again.  It’s most certainly a pleasant surprise, because this body is much better.  It still maintains that impressive god-like physique, but avoids a lot of the odd proportion issues and especially that “shelf” issue at the front of the torso.  I wouldn’t mind seeing some of these parts become more regular additions to the bigger guys.  Interestingly, both my favorite and least favorite aspects of the sculpt are on the same piece: the head.  The expression on the face is perfect for Herc, the beard is nicely defined, I dig the intricate nature of the head gear, and the flow of the hair is great 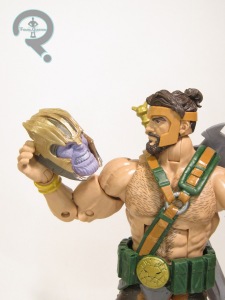 too…mostly.  But he’s still got that freaking man-bun.  For whatever reason, it just really bugs me.  Not enough to distract from the rest of the awesome sculpt that it’s attached to, but enough to give me slight pause whenever I first pick him up.  The texturing on his boots and pants is on par with most of the MCU level stuff, and I think his harness is the least float-y harness piece yet in modern Legends, which is definitely a step in the right direction for a line that already takes lots of steps in the right direction.  It’s all topped off with a pretty darn solid paint-job.  Some of the paint for this assortment has been a little iffy, so I had my concerns about Herc, but he turned out quite nicely.  Everything is nice and cleanly applied, and he manages to be colorful and eye-catching without being as garish as some of his incarnations have the potential to be.  Hercules is perhaps the best accessorized figure in the line-up, getting a sword and mace (both of which can be stored on his back), plus two sets of hands for both fists and gripping.  A comic figure getting extra hands is always cause for celebration if you ask me.  And, he’s also packed with the head of the Thanos Build-A-Figure, which is now complete!

As much flack as it may get, I’ve actually always really loved Hasbro’s original Hercules figure.  He was quite good for the time, and I always felt he did a solid job of capturing the spirit of the character.  Sure, he was looking more and more dated with each updated release, but replacing him would still be a daunting task.  Well, maybe not so much.  This figure’s awesome.  Like, really, really awesome.  I didn’t have much of an opinion of him going in, but he quickly became my favorite figure in the set.  Even if he does have that stupid man-bun…

Hercules was purchased from All Time Toys, and he’s currently in-stock at their store, here.  Go buy him.  Go buy him now. And, if you’re looking for other toys both old and new, please check out their website and their eBay storefront.