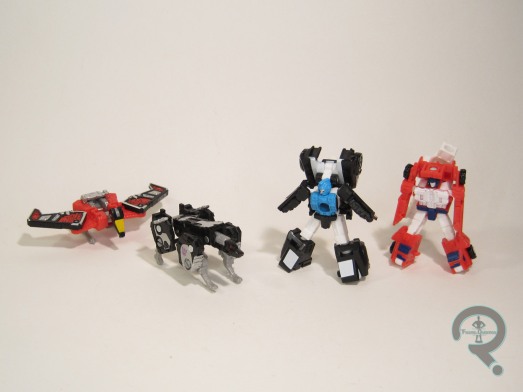 What, you didn’t think the Transformers reviews were over, did you?  No, of course not.  I’ve got one more set of them that needs reviewing.  I’ve looked at Voyager Class, Deluxe Class, and Battlemasters.  Barring Leader Class (which I’ve reviewed in the past, just not this week), there’s one more release type left to look at: Micromasters!

By far the most pivotal pairing in this assortment is the Spy Patrol, designed to augment the Voyager Class Soundwave released, since he lacked his usual little buddies.  The chosen ones are Ravage and Laserbeak, who I’d say are probably his most recognizable companions.  However, this style of release does lend itself to the possibility of seeing some of his other guys released down the line.  The two of them are roughly the same size as the Battle Masters, and compare fairly similarly to the likes of Pteraxadon in particular.  Of the two, I think Laserbeak’s standard mode is the superior offering, being generally more posable and more convincingly a bird.  His feet are also properly sized to match the grooves on Soundwave’s forearm, making it a little easier to keep him standing.  Ravage is slightly less convincing, because a panther’s just not quite as naturally linked to the alt-mode, and he’s also not as easily posed.  Both of them transform into the same alt-mode, which is a small rectangle that’s definitely not a cassette.  Why would it be that?  The small rectangle is well-sized to Soundwave’s chest cavity, which makes for easy storage. 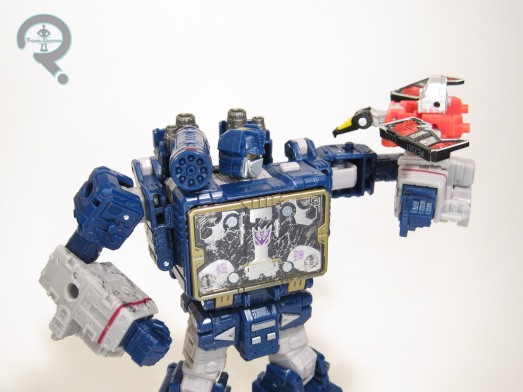 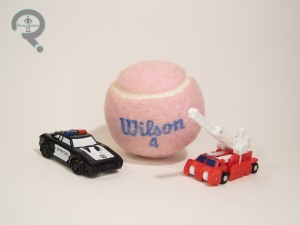 For the Autobot portion of this assortment, we have the Rescue Patrol, originally a four man team, now cut down to two.  They aren’t designed to specifically work with anyone in the main assortments, so they more follow in the footsteps of the first assortment of Micromasters.  These two also stand pretty much the same height as the Battle Masters, and are more straight forward robots.  They’re more posable, with knee movement on both, as well as a waist joint on Red Heat, and a neck joint on Stakeout.  Of the two, Stakeout is the more solid figure, with better posability and a more natural sculpt.  Red Heat is a little more compromised by his alt-mode, so he’s got this weird head covering thing.  He’s also just a lot blockier and stiffer.  For their alt-modes, both of them turn into rescue vehicles: a cop car for Stakeout, and a fire engine for Red Heat.  Stakeout again makes out the best, given his more natural looking car state.  There’s another mode for the two of them, where they combine into a gun mode to be held by one of the bigger guys.  It’s not the most convincing thing, but it’s a nifty gimmick.

Obviously, I wanted the Spy Patrol to complete my Soundwave figure, so I was down for that set from the start.  When they came in, the Rescue Patrol was there as well, and I kind of felt a little sorry for them, and liked them enough in person to want to give them a try.  While both sets have their definite strong figure and weak figure, the whole package deal works nicely.  I’m definitely glad I grabbed both of them.

Both of these sets came from my friends at All Time Toys.  Right now the Spy Patrol is sold out, but the Rescue Patrol are still in stock here.  If you’re looking for Transformers, or other toys both old and new, please check out their website and their eBay storefront.