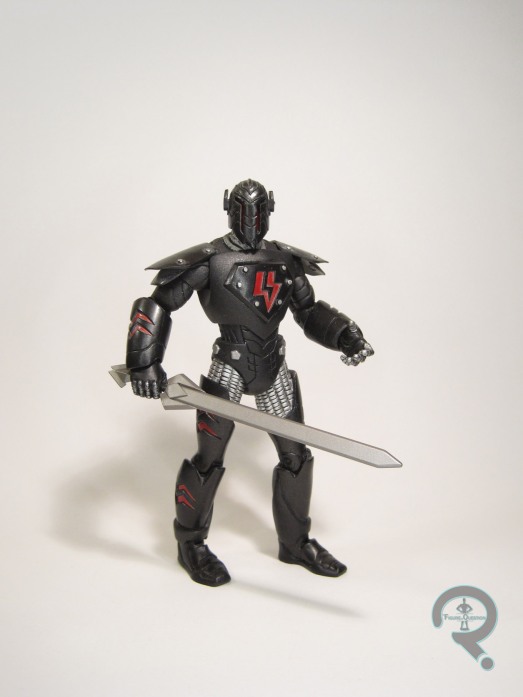 “After landing on the planet Apokolips instead of Earth, Kal-El is raised to be a merciless soldier, becoming Darkseid’s ultimate weapon in the war with New Genesis”

I’ve spoken once before of DC’s “Elseworlds” line, which they launched in 1989 as a throwback to their “Imaginary Stories” of the Silver Age.  It was actually a pretty big success throughout the ’90s, before being put on a hiatus in 2003.  While it was on hold, there was still some recognition of its importance in DC’s history, in the form of a line of dedicated figures, courtesy of DC Direct.  Numerous stories were given coverage, including 1998’s Superman: The Dark Side, a tale which, as the bio so notes, re-imagines Kal-El as landing on Apokolips and becoming a villainous New God. 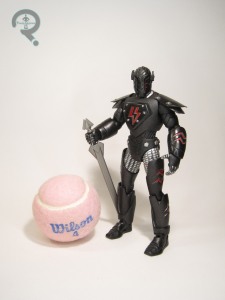 Superman was released in 2007 as part of the fourth (and final) series of DC Direct’s Elseworlds line.  He was available in both “Good” and “Dark” variations.  This would be the “Dark” one.  Of the two, it’s certainly the less classically Superman-styled, and hits a lot of the same beats as the brainwashed Superman’s design from Superman: The Animated Series‘ “Legacy.”  The figure stands 6 3/4 inches tall and he has 13 points of articulation.  DCD was still kind of figuring out the whole articulation thing at this point, so Superman’s not an overly poseable figure.  I suppose he should consider himself lucky that he didn’t get stuck in an uncomfortable pre-pose, like that poor New Frontier Batman.  Instead, he’s just got a fairly basic standing pose, which isn’t that bad looking.  His sculpt was definitely a strong one, even for this line.  It’s sharply defined, and quite clean-looking.  It appears to be fairly faithful to Kieron Dwyer’s illustrations from the book (I haven’t read it myself, so I’m going off what I can find online), and nicely maintains the imposing nature of this armor’s design, as well as capturing that pseudo-Kirby styling. It’s not super detailed, erring more on the side of cleaner, bolder lines, which is again true to the source.  His paintwork is fairly standard from DCD for the time, which is to say it’s pretty solid.  The base work is clean, and sporting a real cool gunmetal grey over most of the figure.  The reds really pop from that, and there’s some really nice accenting, which brings out the details well.  The visor on the helmet is done up in a translucent red, which doesn’t quite catch the light as well as I’d hope, but is otherwise a decent break from the other reds throughout the armor.  Superman was originally packed with an alternate un-helmeted head, a sword, and a display stand.  My figure only has the sword, which, if I’m being honest, is the coolest bit anyway.

Having not read the story, I didn’t pick this figure up when he was new.  Instead, I decided to wait until he was super expensive on the aftermarket, because I’m way smart like that.  Okay, not quite.  This guy was traded-in to All Time Toys in a large lot back in December, and while I’ve never read the story, I quite liked his look, and was able to get him for a very good deal.  He’s a cool-looking based on a cool-looking design,  He’s not super-poseable or anything, but he’s certainly a cool display piece.