Okay, so I usually do a better job of spacing out the Transformers reviews, but…well, I have a lot of Transformers these days, and they’re piling up ever so slightly.  I know, what a terrible problem I have.  How can I free myself of the terrible shackles that are this problem?  And how in god’s name do I now own three separate Optimus Prime figures?  That’s the realest question right there.  For today’s review, I’m going back to the thing that broke me into Transformers in the first place: Bumblebee.  I picked up the title character in his movie form, but had as of yet not gotten anyone else, preferring to stick with the Siege stuff for the most part.  Nevertheless, here I am looking at another Optimus Prime figure.

Optimus Prime is a Voyager Class release, as part of the Transformers: Studio Series line-up, where he’s figure 38.  He started hitting shelves right around April/March, arriving with the comparatively far less in-demand Constructicon Rampage.  In his robot mode, the figure stands 6 1/2 inches tall and he has 22 practical points of articulation.  Optimus is an all-new sculpt and is certainly heavily inspired by his G1-based design from the film’s opening battle on Cybertron.  He’s not a pitch-perfect recreation of the final film design, generally being a little boxier than the one seen on the screen, but he’s not too far removed, and it’s certainly clear which version they’re going for, especially in the robot mode.  Where the Siege Optimus was going for an animation accurate model, this one instead serves more to upgrade the original toy, albeit with some more movie-ized details, making him look a fair bit more “real-world.”  He’s not as clean or sleek as the Siege Optimus, and he has a few more spots of kibble, with the back and forearms being the most prominent.  The back doesn’t bug me quite so much, but the forearms are a little frustrating, especially since they aren’t as clean as the corresponding kibble

on the Siege figure, and they have a tendency to start unfolding during posing.  That being said, the overall appearance of the robot mode is pretty cool, and he makes for a solid action figure.  Optimus’ alt-mode is the source of even more inaccuracy compared to the film because while Bumblebee turned into an officially-licensed VW Beetle, Optimus instead settles for an unlicensed equivalent to the Freightliner he turns into in the film.  It’s not quite accurate, but it’s admittedly not a bad design all things considered.  Additionally, while it’s definitely very fiddly and packed with false shell pieces for the final mode, the transformation’s not too bad on this one, making transforming back and forth pretty easy going.  Optimus is packed with his Ion Blaster he’s seen using in the opening battle, which is a nicely scaled piece.

So, this Optimus is officially my “patience is a virtue” Optimus.  As one of the most demanded and sought after Studio Series releases, this guy came and went pretty quickly at All Time Toys, my usual spot for Transformers.  As such, I didn’t get one at the time of release, and in fact gave up the chance to grab a re-stock later down the line so that another customer could have him.  When a loose figure was traded into the store a few weeks back, the owner handed him over and said “your patience paid off.  Happy Birthday,” and just like that, I had an Optimus.  Like I noted when I reviewed Galaxy Force Optimus, the Siege Voyager remains my go-to, but there’s a lot I like about this figure. 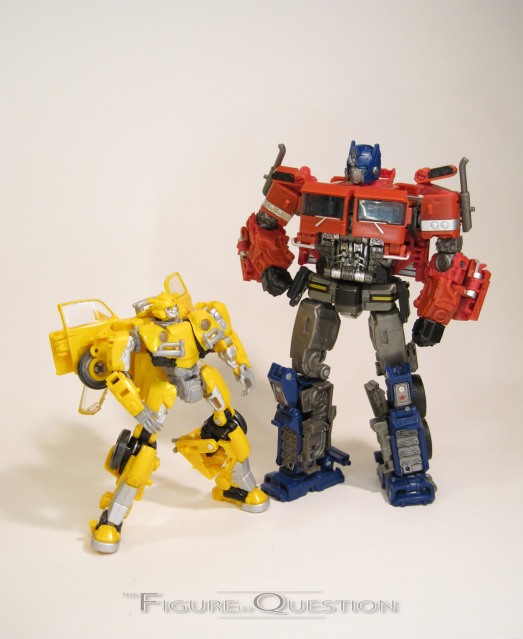