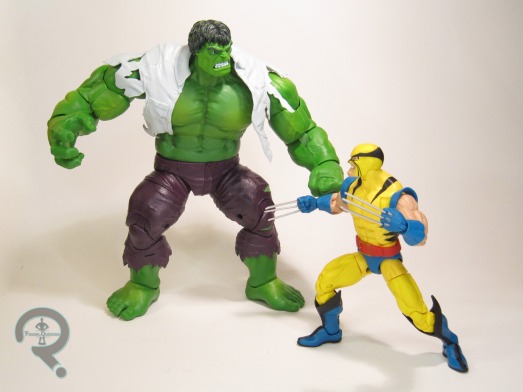 First debuting on the final page of The Incredible Hulk 180, and then making his proper first appearance in the following issue, Wolverine was designed from the very beginning with the intent of spinning him out of the Hulk’s series, though the decision to join him up with the X-Men would come a bit later.  Though Wolverine and the Hulk have largely become separate entities entirely, they still do have the occasional run-in as a throw-back, and their first battle has definitely become one of Marvel’s most memorable moments.  Fitting then that Hasbro would commemorate the meeting in their “80 years of Marvel” sub-line of Marvel Legends.

Hulk and Wolverine are one of the two comic-based “80 Years” two-packs, each of which pairs off one smaller figure with one Build-A-Figure sized figure.  The two figures here are more or less patterned on their appearnces in Hulk #181, albeit filtered through the line’s already established style.  Interestingly, while this is hardly our first time getting a first appearance Wolverine, this *is* the first time he’s been packed with a Hulk.  Kinda crazy. 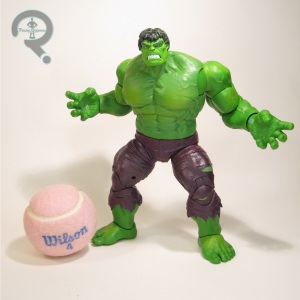 “Powered by gamma radiation, the incredible, rage-filled Hulk smashes his way through any challenge and clobbers any enemy.”

While we’ve had a decent number of Legends Hulks in recent years, but they’ve mostly been movie-based.  Overlooking 2015’s Indestructible Hulk (which was a repainted movie figure), our last proper comics Hulk was the Ed McGuinness Hulk from the fan’s choice packs in 2010.  It’s about time for some updating.  The figure stands 8 inches tall and has 30 points of articulation.  This Hulk uses a newly-implemented body, which has already technically seen use on two exclusive Hulks, but was designed for this figure.  Given the various larger bodies we’ve gotten for some recent Build-a-Figures, I was expecting to see some sort of reuse, but I’m not unhappy to get the new body, especially since it gives Hulk butterfly shoulders, something you don’t usually see on larger figures, and definitely a huge plus when it comes to posing.  The general design of this figure’s sculpt is very reminiscent of Hulk’s ’70s design aesthetic, rather than more recent roided out takes on the character.  The figure includes a torn up shirt as an add-on; while he didn’t sport this while fighting Wolverine, it was a common place item for him to be wearing.  It’s held in place only by gravity and perhaps the back of his head, depending on how you have him posed, meaning that it’s also very easily removed if it’s not your speed.  The paint on Hulk is fairly nuanced in its application, with the skin in particular showing some really solid work on the accenting.  There’s a slightly lighter green hue which shows itself throughout all of the exposed skin.  Hulk is packed with two sets of hands, one in fists, one in open gesture. 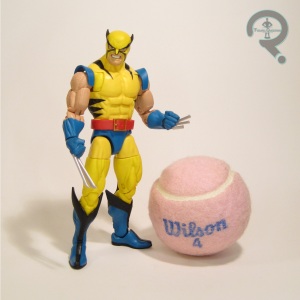 “A super-powered agent of the Canadian government, the Wolverine is a skilled fighter with razor sharp claws and a fierce temper.”

In his first appearance, Wolverine was sporting a wildly different mask than the one he would have for the rest of his career.  He was meant to keep it, but Gil Kane accidentally changed it for the cover of Giant-Size X-Men #1, and interior artist Dave Cockrum decided he liked it enough to keep as the character’s permanent look, thereby making this particular design more of a novelty then anything.  It’s gotten one Legends release before, courtesy of Toy Biz’s Face Off sub-line, but it was due for an update.  The figure stands 6 inches tall and has 32 points of articulation. This Wolverine is built on the same upgraded body as he last few, with a new head and shoulderpads to more properly capture the earlier design.  They’re sufficiently different enough from the normal pieces to make him stand out as his own variant, which is always a good thing.  For his color scheme, Wolverine very closely matches the brighter colors of his initial appearance, again giving him a nice standout appearance from other Wolverine figures, especially the tiger-stripe Wolverine.  The figure is packed with hands with and without his claws, which weren’t 100% retractable at the time of his first appearance, but are still a nice extra to have.

With all the announcements for the 80 Years sub-line floating about, this one got a little buried for me.  I knew it was coming, but I never really had the chance to focus in on it.  Its arrival was also jammed in alongside several other Legends releases, but I was happy enough to get it.  The Hulk is the definite star here, and will serve as the definitive version of the character for most collectors, myself included.  They really brought their A-game for him.  Wolverine’s more of a place holder to justify the larger set, but I can’t complain about getting him, nor can I say he’s not a good figure.  He’s formula, but it’s a good formula.

I grabbed this pair from my friends at All Time Toys.  If you’re looking for Marvel Legends, or other toys both old and new, please check out their website and their eBay storefront.