Apparently, it’s about time for somebody *else* to get into the business of making Ninja Turtles toys, because Playmates, NECA, and Mondo having the license just wasn’t quite enough.  DC Collectibles, who, you know, usually make, um, DC collectibles, have gotten in on this thing, but in their defense, they’ve got a good reason.  That reason is Batman Vs. Teenage Mutant Ninja Turtles, an animated film based on a comic that goes for the rather straight forward premise in the title.  To be fair, it’s a marketer’s dream, so toys seem natural.  DCC is planning on offering up a selection of five two-packs as Gamestop exclusives over the next few months, but to kick things off they offered up a true crossover figure: Michelangelo dressed as the caped crusader!

Mikey as Batman was a summer con exclusive item, with follow-up distribution through Gamestop, who will be carrying the rest of the Batman Vs. Teenage Mutant Ninja Turtles line.  He’s inspired by the animated designs of the movie, which are yet another new stylization of the turtles.  Oh, and he’s also wearing a Batman cowl and cape, of course.  The figure stands 5 inches tall and he has 28 points of articulation.  His sculpt is an all-new one, though no doubt he’ll be sharing most of his parts with the standard Mikey that’s coming packed with Alfred later down the line.  It’s a pretty solid piece of work.  It’s very clean and animation friendly, and I definitely dig the huge smile on his face. What I like most of all about it his how well the articulation works.  It’s not perfect, but given that it’s DCC we’re dealing with, it’s actually suprisingly good.  The range is solid, the movement is relatively smooth, the joints do okay holding the poses, and there aren’t any obviously missing joints.  The plastic’s a little harder than I might like, but that comes with the DCC territory.  The cape is a cloth piece, and while 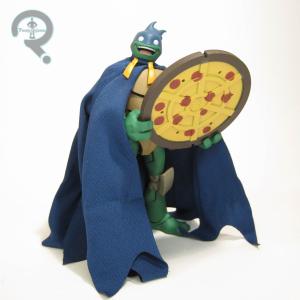 I’m iffy on cloth capes, I actually really, really like this one.  It’s about on par with the cape on the Mezco DKR Batman in terms of quality, and that’s a very big compliment.  Mikey’s paintwork is fairly reasonable; I like how they’ve simulated the linework of the animation style in a way that looks good from pretty much any angle.  That’s quite hard to do properly.  Mikey is a fairly decently accessorized figure.  While he has nothing to go in the empty holsters on his belt (I’m confident the standard release will be keeping his nunchucks there), he does include three sets of hands (in griping, flat palm, and thumbs up), a slice of pizza, and a NYC manhole cover painted up like a whole pizza.  It’s kind of an eclectic collection of parts, but a pretty fun set of extras nonetheless.

This is Max’s fault.  I know, what are the odds?  It’s not even a Transformers thing.  So how’d it work out that way?  Well, he found this figure and asked if I wanted it, and here we are.  I know, I fought so valiantly against getting it.  Honestly, I was curious about the quality of the line, and wasn’t sure I wanted to drop a whole $50 to find out.  This figure ended up being a very pleasant surprise for me, and in fact convinced me I probably wanted to pick up at least the main four Turtles and their counterparts.  Not a bad figure at all.