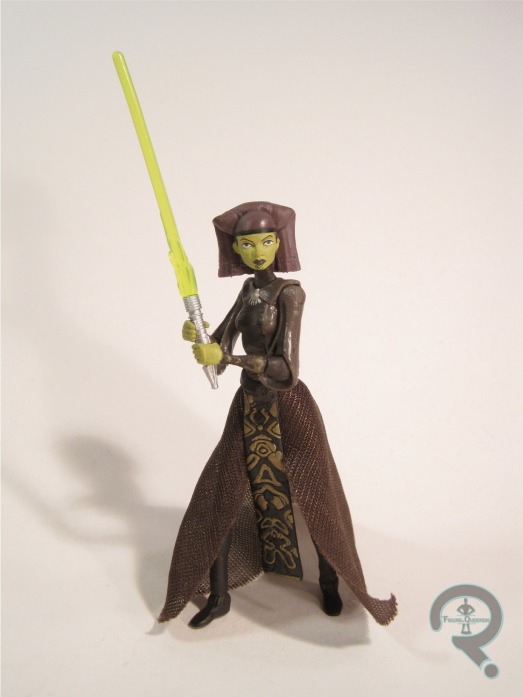 The clones weren’t the only ones to benefit from the increased time for characterization offered by the Clone Wars cartoon.  After being little more than set dressing for the prequel trilogy proper, many of the Jedi introduced over the course of the films finally got their chance to shine via the cartoon.  Jedi Master Luminara Unduli and her padawan Barriss Offee fell into that category, and both wound up with pretty decent arcs over the course of the show, as well as better toys to boot. 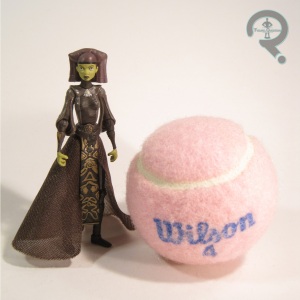 Luminara was released in the 2009 assortment of Clone Wars figures.  She was part of the fifth wave of figures and was numbered CW30.  The figure stands 3 1/2 inches tall and she has 22 points of articulation.  Fortunately, by this time in the line, the Jedi were getting fully articulated; while Luminara’s not quite as mobile as the clones, she can still get a decent number of poses out of her.  It’s further aided by the cloth robes on the bottom, another newly-implemented idea when this figure hit, which allows her legs to pretty much have full mobility.  Her sculpt is a pretty respectable recreation of her design on the show.  It’s maybe not quite as impressive as some others in the line, but it’s decent, if maybe a little frail feeling.  To be fair, though, her design is very skinny on the show and there’s only so much you can do with that.  Luminara’s paint is certainly accurate, which means it’s lots of brown and green.  Not incredibly eye catching, or even all that unique for Star Wars, but it’s again true to the character and the application is pretty solidly handed.  Luminara includes her lightsaber both ignited and turned off, depending on your desired set-up.  It feels a little light, but honestly it’s probably better than getting a missile launcher or something.

I don’t remember specifically when I got this figure, but I know it was when she was relatively new.  While Luminara wasn’t necessarily a favorite of mine, I liked Barriss a lot, and with her figure coming out later, Luminara held me over for a little while I suppose.  It’s a pretty decent figure, which I guess isn’t a huge shock, since Clone Wars figures were all pretty great once the line hit its stride.