“Lt. Falcon is a second-generation Green Beret, his father having served with the 10th SFGA (Special Forces Group Airborne) from its very beginnings at Fort Bragg’s Smoke Bomb Hill. Falcon was cross-trained in demolitions and served briefly with the 5th SFGA ‘Blue Light’ counter-terrorist unit as an ‘A’ Team XO. He is proficient in Spanish, French, Arabic and Swahili and a qualified expert with NATO and Warsaw Pact small-arms.”

1987 was a big year for G.I. Joe. After running a successful cartoon for two seasons, they hit the big time with a feature-length, fully animated feature….or at least that was the plan.  Though G.I. Joe: The Movie was supposed to be the first of the three animated Hasbro productions to hit theatres in 1987 (with the other two being Transformers: The Movie and My Little Pony: The Movie), production delays got it moved to the end of the list, and by that time, the poor performance of the other two films at the box office meant that G.I. Joe: The Movie went straight to video and TV.  The 1987 toy line-up served as the source of the film’s new focus characters, with Falcon serving as a potential new lead as the series’ old lead Duke was planned for a rather dramatic exit.  As with Hot Rod over with the Transformers, being pushed as the replacement for the prior central lead didn’t exactly enamor fans to poor Falcon, who has subsequently become something of a butt-monkey amongst the Joe fandom.  Poor guy.

As noted above, Falcon was part of the 1987 line-up of G.I. Joe figures from Hasbro, debuting alongside his movie appearance.  The figure’s bio makes no mention of Falcon’s relation to Duke as mentioned in the movie, because he wasn’t originally meant to be related to Duke.  If anything, wouldn’t it have made more sense to have him be related to Hawk?  You know, bird-themed code names and all that?  I suppose that would have meant actually devoting some screen time to Hawk, though, which the cartoon really didn’t like to do.  Back to the actual figure, though!  He stands 3 3/4 inches tall and he has 14 points of articulation.  By this point, Hasbro had the construction of the line down pretty pat, so there were no real surprises with Falcon.  His sculpt was unique to him at the time of his release, but like a number of the ’87 figure, he got a Night Force re-deco the following year.  It’s actually a fairly classically Joe sculpt, going back more to the line’s roots as a proper military force.  Mixed in with the rest of ’87s colorful cast, it’s a wonder Falcon go the chance to stick out at all.  Compared to the likes of Crazy Legs, his sculpt seems a little bit softer, and has less of the unique details, but it’s a solid offering nevertheless.  Falcon’s paintwork continues the rather straightforward realworld approach of the sculpt, placing him pretty much entirely in drab greens.  There was a variation in Falcon figures and the sizing of the camo pattern; some were larger, and some were thinner.  My figure is a thin-camo Falcon, for what it’s worth.  Falcon was packed with a shotgun, knife, and backpack with a removable antenna.  Again, a fairly basic set-up, but if it works, it works.  The shotgun is at least a little more unique, and the backpack is certainly cool.

Much like Hot Rod, Falcon is a character that I feel a little bad for when it comes to the fan base and their hate for him, and I’ve kind of always wanted a Falcon.  That said, he wasn’t super high on my list when the large collection came in at All Time…at first.  Then this crazy thing happened.  While I was sorting through the figures, I swore I saw a Falcon.  I swore he was one of the first figures I pulled out of the box.  So did Jason, the owner.  So, when I found his filecard, but no figure to match, I was somewhat baffled.  Maybe I was losing it?  There were other filecards without figures to match, so I guess he was just never there.  But as I progressed through the collection, I eventually found his backpack, and his gun, and his knife, making the lack of Falcon even more apparent.  Just as I was about to close the whole collection up, I realized I had one vehicle to check for parts.  And I cracked open the cockpit, and wouldn’t you know it, there sat Falcon.  Not a clue what figure I thought I saw the first time, but Falcon was still in the collection.  And, after the whole mystery of finding him, I kind of felt like I had to buy him.

As touched on above, Falcon came from All Time Toys, who got in a rather sizable vintage Joe collection, the remnants of which can be checked out the Joe section of their eBay page here.  If you’re looking for other toys both old and new, please check out their website and their eBay storefront. 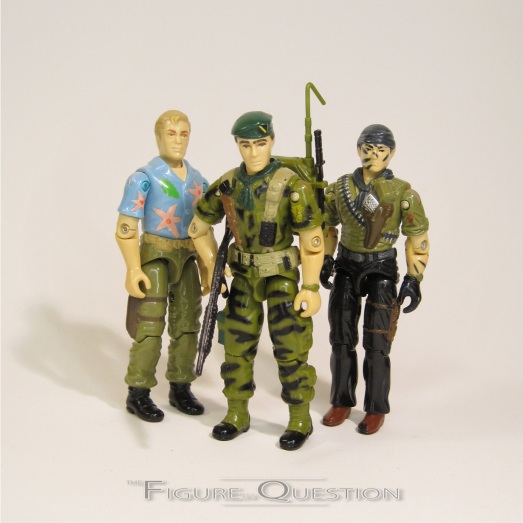