“SNAKE EYES honed his combat skills as a Long Range Recon Patrol trooper in Southeast Asia and perfected his mystical martial arts techniques with the same Ninja clan that produced STORM SHADOW. Although he is as equally adept with submachine guns as he is with swords, Snake Eyes is most dangerous and unpredictable when he’s armed and cornered. When HAWK went to Snake Eyes’ cabin to recruit him for duty with G.I. Joe, the silent Ninja was out hunting rabbits – bare handed!”

After around 1988, there’s something of a downward shift for G.I. Joe.  They really hit their groove in ’85, but the movie really through them for a loop.  Despite gimmicks and really far out concepts largely being the thing that people deride the movie and its associated characters for, Hasbro would nevertheless double down on such concepts as they embarked into the ’90s.  Interspersed with the likes of Super Sonic Fighters and Eco Warriors, they did manage to have some slightly less gimmicky Joes, I suppose, including a rather surprising go at returning Snake Eyes back to his pre-ninja roots, going back to his original backstory as a commando, albeit one in bright 90s-esque neon colors. 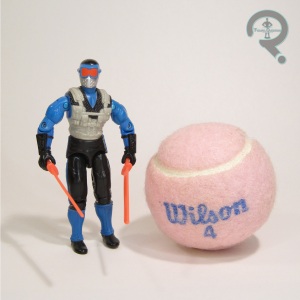 Snake Eyes was released in the main 1991 assortment of G.I. Joe, as the fourth version of the character to grace the line.  The figure stands 3 3/4 inches tall and has the usual 14 points of articulation.  By the ’90s, the sculpts were definitely changing again, morphing into a style that would more closely match the rest of the stuff that would come out of the decade.  Snake Eyes showcases a lot of these changes, being way more bulked up and exaggerated in his proportions than the character’s prior incarnations.  Poor Snake looks like he barely fits into his gear this time around.  Maybe it’s time to put down the weights?  Or lay off the steroids?  Something.  Well, it’s gonna get worse before it gets better.  Snake Eyes sculpted design is perhaps not the most radical departure from prior designs, although the artful nature of prior looks is largely lost, with everything adding up to a design that doesn’t quite have that same cool factor as prior versions.  All of the elements to make a Snake Eyes are certainly there, but they come together like some sort of off-brand product.  The goggles in particular just seem…goofy and unimposing.  More like safety goggles than anything combat ready.  The artwork for the figure honestly doesn’t make them look that bad; there was something lost in translation.  Of course, the biggest thing against this figure’s probably the paint, where he departs the most from every other version of Snake Eyes.  Previous Snake Eyes figures all were very heavy on black, and very light on pretty much anything else.  This figure’s still got some black, but it’s interspersed with a lot of light blue, grey, and even some red.  While he’s hardly the most garish figure his year produced, by Snake Eyes standards, he was pretty obnoxious.  Also, inexplicably in Cobra colors, for whatever reason.  More than anything about the sculpt, these colors are the thing that remove this figure the most from being Snake Eyes.  Repaints of this figure in more Snake Eyes-esque colors aren’t perfect, but do at least make him more recognizable.  My guess would be that the sculpter and the person who chose the colors were not one and the same on this figure.  Snake Eyes was packed with two swords, a submachine gun, a backpack with a built-in missile launcher, and a display stand.  With the exception of the pack and stand, the accessories are all a vibrant red, again removing the usual Snake Eyes brand a bit.

When the very large Joe collection that came into All Time over the summer came in, this figure’s file card was in the mix, but he was nowhere to be seen.  Unlike Falcon, he did not miraculously appear out of one of the vehicles, however.  Instead, he miraculously appeared out of a small bag brought into the store by the person who sold us the rest of the collection, who had apparently found Snake Eyes and another figure while cleaning.  As an unabashed Snake Eyes fan, I have this weird desire to own all of his vintage figures, no matter how goofy, lame, or off-brand they may be.  This guy’s not great, but I honestly love him anyway.

As noted above, Snake Eyes came from All Time Toys, who got in a rather sizable vintage Joe collection, the remnants of which can be checked out the Joe section of their eBay page here.  If you’re looking for other toys both old and new, please check out their website and their eBay storefront.