After a slightly more off-kilter theme for Series 1, Marvel Minimates went a little more straight-forward for their second assortment, centering it on Marvel’s #1 super hero, Spider-Man.  We got three prominent Spidey baddies, as well as a whole handful of Spidey variants.  In a world where Marvel Minimates wrapped with Series 3, this assortment would have made for a satisfying Spidey sub-set.  Today, I’ll be taking a look at a slightly worse for wear Spidey as he faces off against his dark reflection, Venom, as well as perhaps the most popular Spidey costume variant ever.

Damaged Spider-Man and Venom were released in Series 2 of Marvel Minimates as one of the standard sets, with the one-per-case Black Spider-Man swapping out for Damaged in each case.  Both Damaged Spidey and Venom would also see release as singles and in the TRU boxed sets as well, but this would remain the only way to get this specific Black Spidey. 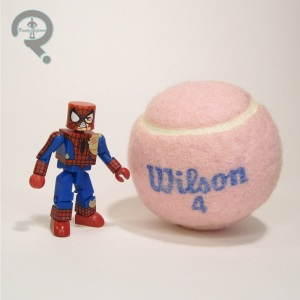 A battle-damaged Spidey is a pretty long-standing tradition for toylines, and this particular figure would himself start the trend of battle-damaged figures within this particular line, particularly in the earlier days.  He’s just using the basic ‘mate body, albeit that wonky long-footed old style release.  Everything else is paint, and the paint was never really better than on these earliest Spider-Men.  This one uses the standard Spidey from this same assortment as a starting point, but adds in several tears to the costume, with a bit of exposed skin.  The coolest bit is definitely that little bit of Peter’s face we can see; that teeth-clenched expression really sells the severity of whatever situation he’s in.  His one accessory was a simple grey webline, which would be the go-to accessory for Spidey sets going forward.

Swapping out for Damaged Spidey is perhaps one of the most controversial choices for a limited variant release, Spidey in his black costume.  This figure, unlike his fellow Series 1 and Series 3 variants, showcases a “we’re not gonna get more than three series” mentality, because without that in place, it makes absolutely no sense to make the most popular costume variant for Spidey a supremely limited release.  It’s not a huge shock that DST would eventually release several additional versions of this costume, since he was going for mad money for a good long while.  This one uses the same layout as the Damaged, with just the standard body, no add-ons.  His painted details are sparser, befitting the costume’s simpler design, but it honestly ends up working seriously in the figure’s favor.  Straight black and white’s a very good look.

After Peter ditched the alien symbiote, it moved onto Eddie Brock, and the two became Venom, one of Spidey’s definitive foes.  Venom has no shortage of ‘mates, but this is certainly the most basic.  The majority of it’s actually identical to the Black Spidey from above, but he does get a unique set of clawed hands, and a different head.  The head seen here is actually the one with the uniquely sculpted tongue, but there’s an important note on that.  Originally, Venom was meant to include two heads, one with tongue, and one without.  All of the standard US release Venoms from the first year were actually shipped out missing the second head with the tongue, so DST offered to send the piece out to customers who bought the earlier release.  LAter releases would add the missing piece back in.  In a turn of fate, my figure is actually missing the head without the tongue.  Of course, I see no situation where I would display that head, so I’m not worried about it.

Unsurprisingly, given how popular the costume is, the Black Spidey was very hard to find when these hit.  I wanted that one, and didn’t really have much interest in the damaged version, so I ultimately ended up getting none of them when they were new.  When All Time got in a very large Minimate collection a few months ago, Black Spidey was at the top of my list of wants, and the other two just sort of came along with him.