“Proud and powerful, the Iron Patriot is heavily armed, high-tech, and ready for battle.”

So, here’s the thing about Endgame, and specifically about its armored characters: the armor we see them wearing on the screen isn’t what the actors are actually wearing during the shoot.  Don Cheadle isn’t wearing the latest War Machine armor, he’s running around the set in a pair of sweats with motion capture markers.  When it comes to making toys of these specific designs, Hasbro has to work from the design sheets of what’s supposed to be on screen.  If things change between those sheets and the final film, you get inaccurate products.  Take, for instance, last summer’s Endgame War Machine.  An awesome figure, held back by only one small thing: it was the wrong colors. 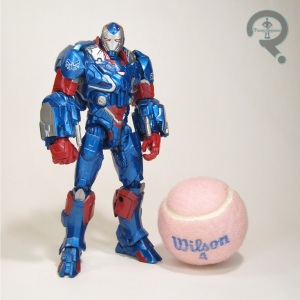 Iron Patriot is the final single-carded figure for the Thor Series of Marvel Legends.  The figure is technically covering the same ground as the Endgame War Machine, but as noted above, that figure was working from early designs.  Though never called Iron Patriot in the film, the figure nevertheless uses the name again; one has to wonder if Rhodey was using the monicker during the time jump to try and re-inspire the public again after Steve Rogers stopped being Cap for a bit. The figure stands 7 inches tall and he has 30 points of articulation.  We’ve seen some of this sculpt before when it was War Machine, but not as much of it as you might think.  The two figures share the same head, shoulders, upper arms, hands, waist, and shins; the torso, forearms, and feet are completely new, and the upper legs have been re-worked to accommodate the missile attachments.  The new parts mesh pretty well with the old, and he’s got a pretty similar feel to that figure in terms of build and posability.  I really liked the War Machine figure, so I can’t complain about seeing those parts again.  With the exception of the torso piece and feet, which aim to make the figure a tad more film accurate, the primary purpose of the new pieces are to more fully kit out the armor.  The first War Machine had a few weapons out, but this version’s got pretty much everything deployed.  With the exception of the forearm cannons, everything can be removed, so that he can be a more paired down version of the armor.  The paintwork is more colorful than War Machine, obviously, and requires more apps.  That said, he does end up missing out on a number of spots of colors he should have.  The most evident missing parts are some of the silver elements.  They’re not horribly obvious, and he’s doesn’t look *unfinished*, but I don’t feel he looks quite as clean a figure as the War Machine.  The metallic blue is cool, though.  In addition to all of the weapon attachments, Iron Patriot also includes not one, but two heads for the Build-A-Figure Thor.

I was pretty happy with the War Machine figure, inaccurate to the source material though it may be, so I didn’t feel like I needed a fixed version.  That said, I certainly wasn’t going to turn it down, since I liked the previous figure quite a bit, and I also liked the first Iron Patriot a lot.  Ultimately, I do like this figure, though I’m not sure I like him quite as much as I expected to.  He’s cool, but I think I’ll stick with the standard War Machine colors.

As with the vast majority of my Legends these days, I picked up Iron Patriot from my friends over at All Time Toys.  If your looking for other Legends or other toys both old and new, please check out their website and their eBay storefront.