On this Valentine’s Day, I’m examining the truest love of all: the love of hating one’s enemies and watching them unquestionably defeated by circumstances that you and you alone control.  A love that Victor Von Doom, greatest villain in all of comics, has been striving for since his introduction in 1962.  But that curse-ed Richards just keeps preventing him from attaining it.  How dare he?  Alas, Doom will just have to settle for the love of having the best action figure in the latest assortment of FF-themed Marvel Legends.  It’s the small victories that keep you going. 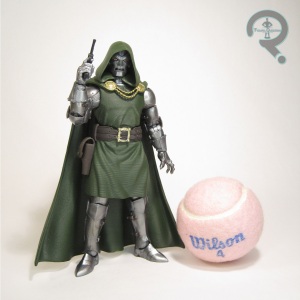 Doctor Doom is figure 1 in the Super Skrull Series of Marvel Legends, a great example of Hasbro knowing to lead with their best foot forward.  Alongside the Thing, Doom is one of the double-packs for this assortment, again an example of Hasbro knowing what’s up here.  While Victor Von Doom returned to Legends last year as a Walgreens exclusive, it was under his Infamous Iron Man moniker, and as cool as that figure was, he wasn’t classic Doctor Doom.  We haven’t gotten one of those since 2012, and even that one was a re-used mold from ’08.  The need for a proper update, especially in light of the FF getting classic-inspired updates in the Walgreens line-up.  The figure stands 6 1/2 inches tall and he has 32 points of articulation.   Doom gets an all-new sculpt from head to toe, and it’s one of Hasbro’s most impressive sculpts, pretty much in their entire time on the license.  It takes the classic Doom design and effectively just translates it to how it would look if manufactured in real life.  The armor has rivets, seams, and leather straps and clasps, and under the main plates, you can clearly make out a chain mail under suit.  Even under the skirt of the tunic, the armor remains fully detailed, even though there’s absolutely no reason for it to be.  The tunic is appropriately detailed in its own way, with a distinct fabric texturing sculpted in to differentiate it from the armored segments.  At first glance, I felt the skirt of the tunic was too long, but after messing with the figure a bit, I’m actually quite happy with the length, and also pleasantly surprised by how posable the hips remain even with it in place.  On the back of the torso, there are jet thrusters, as have become customary for Doom figures.  He’s also got a very nicely detailed belt, with a fully working holster.  There are two different heads included with the figure.  He comes wearing the more modern design of his mask (seen in the shot with Wilson), but also includes a more Jack Kirby-inspired head.  Both are beautiful pieces in their own right, but the Kirby head is my favorite by far.  Doom’s paintwork is pretty solid.  While a lot of the colors are just molded, there are never the less plenty of spots where paint *could* have been missed but wasn’t, especially with those straps on the sides of the armor plates, which again continue up under the tunic.  Truly impressive.  In addition to the previously mentioned extra head, Doom also includes his signature Luger, plus two sets of hands (fists, and a trigger finger/open gesture combo).  He also includes the leg of Super Skrull.

Doctor Doom is my favorite comics villain ever, and frequently a favorite of mine when it comes to action figures.  Since completing the Walgreens FF, I’ve been patiently waiting for this guy.  As soon as he was shown off, I knew he’d be my favorite in the set, and in hand he absolutely lives up to my expectations, and makes for the perfect counterpart to my FF.  This figure is clearly a labor of love for Hasbro and I’m very glad to have him.

I picked up Doom from my friends All Time Toys.  If you’re looking for other cool toys both old and new, please check out their website and their eBay Store.