Remember how I ended yesterday’s review by saying I wanted to see more from Spin Master with their DC stuff?  Well, it happened sooner than I expected.  Like, you know, right away.  Don’t you look at me like that.  We all knew what this was, okay?  Look, just sit back and enjoy this Nightwing review, alright?

Nightwing is part of the first standard assortment of Spin Master’s Batman: The Caped Crusader line.  Rather wisely, Spin Master has opted to separate out the Bat-characters from the main DC line, which means that the main line-up won’t get too overshadowed by the Bat-family.  This Nightwing figure is based on the character’s DC Rebirth design, which is my favorite of his more recent redesigns.  I dig the New Adventures vibes.  The figure stands 3 3/4 inches tall and he has 17 points of articulation, for real this time!  No broken joints on this guy!  Nightwing’s sculpt is an all-new piece, but given its generally generic nature, I wouldn’t be surprised to see it get re-used for some similarly built characters.  He’s actually smaller in build than the Superman figure, which is nice to see, given that the far more expensive DC Essentials version didn’t even get that.  You know there’s a problem when your $30 collector’s figure gets outclassed by an $8 toy….I’m getting distracted, aren’t I?  Yeah, it’s a decent sculpt.  It’s not perfect; the neck is a smidge too short, and the hair’s not my ideal choice for Nightwing.  The hands and feet are also a little chunky, but given that the same is true of Superman, that feels more like a stylistic thing.  Also, it’s nowhere near the level that it was on Mattel’s old Infinite Heroes line, so I can give it something of a pass.  Nightwing’s paintwork is all fairly basic, but the bright blue looks really nice, and the application is all pretty sharp. There are one or two spots of missing paint on mine, but nothing too bad or figure ruining.  As with the Heroes Unite line, the Caped Crusader line is also doing the blind-boxed accessories.  There are currently two different accessory sets available for Nightwing.  Mine has the “Harbor Defender” selection, which is a pair of batons (with built-in gauntlets), a scuba mask and tank, and a batarang.  I found the accessories a little more interactive for Nightwing than with Superman, and really like the batons in particular.  He’s also got a collector’s card like Superman’s.

Again, Max’s fault.  I mean, in a slightly different fashion than yesterday’s review.  And, admittedly I get a lot of the blame on this one, since I did actually buy it myself, but Max let me know that the Walmart near All Time had this guy, and said “if you’re gonna grab one, mind getting one for me too?”  At that point, I felt a little obligated, because what was I gonna do, make Max stop on his way home?  That just wouldn’t be very nice, now would it?  So, I got my Nightwing, because obviously I wasn’t just gonna buy one for Max.  As with Superman, I’m very happy with this figure, and am further intrigued by the rest of the line.  Also, this has perhaps set a precedent of me trying out new DC lines by buying Superman and Nightwing.  Possible spoilers for future reviews?  You’ll have to keep reading to find out… 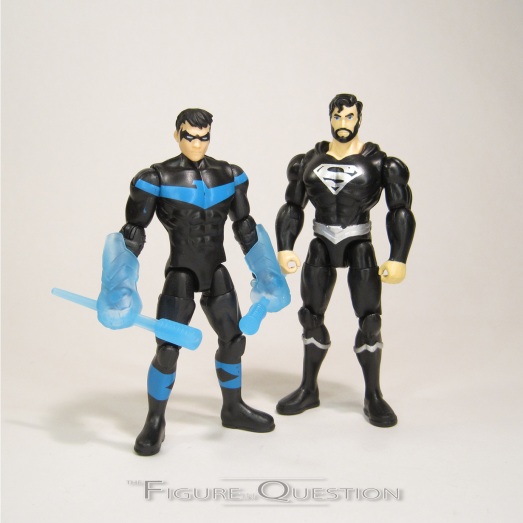