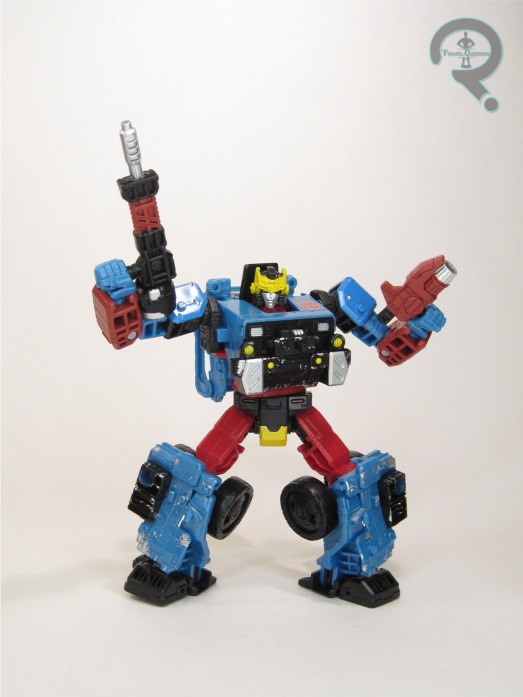 Though Siege has overall been something of a G1 love-fest, that’s not all there is to the line.  Figures like the Galaxy Upgrade Prime give showcase to some of the franchise’s other incarnation, in that figure, and in turn today’s figure’s case, the incarnation being the “Unicron Trilogy”, a somewhat loosely connected set of shows that ran from 2002 to 2005 and that really brought the more classic vehicular Transformers back into the spotlight after Beast Wars and Beast Machines had shifted the focus for a bit.  One of the central characters within the Unicron Trilogy was Hot Shot, a character who was essentially a new creation, and who is one of the better remembered parts of that incarnation.  It’s fitting that he would make his way into some piece of War For Cybertron, especially when the Optimus he goes with was already there.

Hot Shot is one of nine Transformers Generations: Selects figures designed to augment the Siege line at regular retail.  All of the included figures are slight re-workings of pre-existing molds, shipped in a brown cardboard box, and only initially available through online retailers. Like the Galaxy Upgrade Prime, Hot Shot is based on his appearance from Transformers: Cybertron, the last entry in the Unicron Trilogy.  While it might not be my first choice of Hot Shot designs, at least it’s not Energon.  It’s also a sensible choice given the parts catalogue they’re working with right now.  In robot mode, the figure is 5 inches tall and has 20 workable points of articulation.  Hot Shot’s largely a re-paint of Hound.  While the transition to Jeep instead of sports car is a little weird for the Armada fan in me, but it’s a respectable match for the Cybertron Defense Hot Shot figure from the Cybertron line.  In order to differentiate him a bit, he does get a new head

sculpt (which was erroneously used as the basis of the illustration on Hound’s packaging…whoops), which is a nice recreation of the CD figure’s noggin.  Aside from that, it’s the same figure as Hound, which isn’t a bad thing.  I liked the sculpt the first time around, and I still like it now, especially with that new head.  Since the figure is more or less unchanged, so is his alt-mode, which is the same Cybertronian-styled Jeep.  Again, I thought it was pretty cool the first time, and it’s still cool here.  The transformation is still pretty simple, and fun to go back and forth through, so I’m down for it.  The whole figure is changed up by switching the colors from Hound’s muted green to a red, blue, and yellow palette, which evokes Hot Shot’s design nicely, and honestly hides the re-used molds pretty darn well.  I’m down for the drastic change in color scheme!  Hot Shot includes the same accessory compliment as Hound, but with the colors tweaked to match the new scheme of the figure.

Beast Wars was on the air when I started to get into cartoons, and I was certainly familiar with it and how it connected to this whole Transformers thing.  I even had a few of the toys, but it never quite clicked with me.  What did click for me was Transformers: Armada, which I actually watched pretty darn faithfully when it was airing on Cartoon Network.  I had a small number of the toys, with Hot Shot being a personal favorite.  While Cybertron wasn’t quite so much my jaam as Armada, I’ll take pretty much any excuse to get a good Hot Shot toy.  And that’s what I’d classify this as: a good Hot Shot toy.  Of course, now I’m seriously contemplating third party pieces to make him more accurate, and that’s a very dangerous and scary road to go down.

I grabbed my Hot Shot figrue from my friends at All Time Toys.  If you’re looking for Transformers, or other toys both old and new, please check out their website and their eBay storefront. 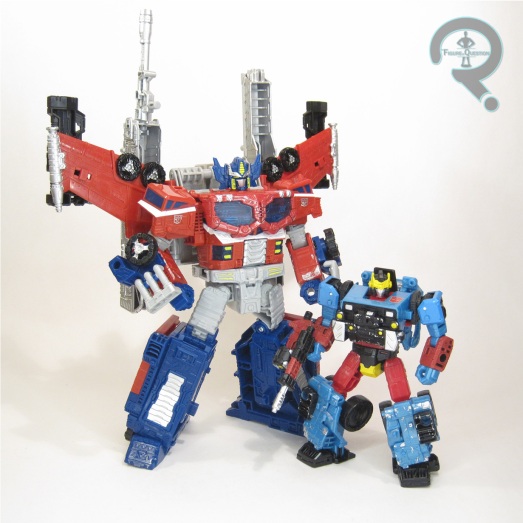