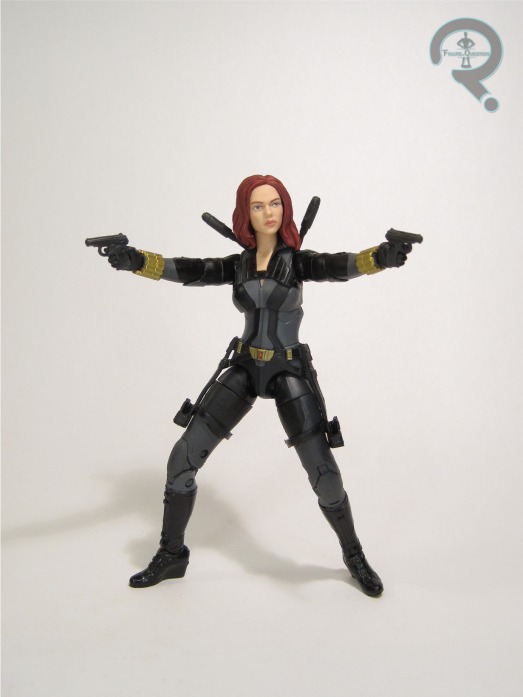 “Natasha Romanoff reunites with a group of spies from her past to stop a lethal force.”

Hey, remember when I reviewed that one stray Black Widow figure last week?  Good, because if I’m honest, I only barely do.  It’s been like three weeks my time, so it’s but a distant memory.  Black Widow?  Now there’s a name I haven’t heard in quite some time.  Despite the film’s delay to October, all of the toys were set to arrive just before everything went nuts, meaning they’re all out there and ready to go for a movie that’s now six months out. Hey, who am I to knock new toys, though?  I’m kicking these reviews off with another figure of the title character herself, the Black Widow!

Black Widow is figure 1 in the Crimson Dynamo Series of Marvel Legends, which is the dedicated Black Widow-tie-in assortment.  She’s the first of the four movie-based figures in the main line-up (there’s also the previously reviewed deluxe Widow, which is its own stand alone release).  The deluxe release gave us Natasha in her all-white number from a lot of the promotional material, while this one gives us her in her more standard color scheme.  I’m actually quite a fan of this particular design, as it’s really the closest that the MCU Widow has gotten to her classic ’70s costume from the comics.  The figure stands 5 3/4 inches tall and she has 27 points of articulation.  A lot of what’s here is shared with the deluxe release, as I assumed would be the case when I reviewed that figure.  It’s sensible, as it looks like the two designs are rather similar.  This figure gets a new upper torso piece, which changes out the webgear she’s sporting on her shoulders.  Now there’s a spot for her to stow her batons on her back,

something I was happy to see after said feature was absent from her Infinity War release.  Beyond that, it’s the same sculpt I looked at before, which is fine by me, because it was a really good sculpt.  The paintwork on this release is overall an improvement on the deluxe’s.  The color scheme of the costume allows for more of the sculpted details to be properly accented, and is just generally a slightly more engaging design.  The only slight down turn is on the face, which doesn’t quite have the same lifelike quality to it that the deluxe release did.  I’m probably going to end up swapping those two heads for my display.  Though not packing quite the same impressive haul as the deluxe figure, this release of Widow still includes two sets of hands (fists and gripping), her dual Markovs, batons, and the left leg to the Crimson Dynamo Build-A-Figure.

With things starting to head back into the beginnings of the path to normality, the floodgates have kind of opened up on toy distribution again, so I didn’t have quite as much of a wait for the full assortment of Widow figures as I’d thought I might.  Having quite liked the deluxe release, I was more invested in this one.  Though the face paint was a slight let-down, the figure is otherwise really solid, and definitely the best MCU Widow to date.  Even with the film pushed back, this figure is definitely worth getting a hold of.

Widow was purchased from my friends at All Time Toys.  If you’re looking for Marvel Legends, or other toys both old and new, please check out their website and their eBay storefront.