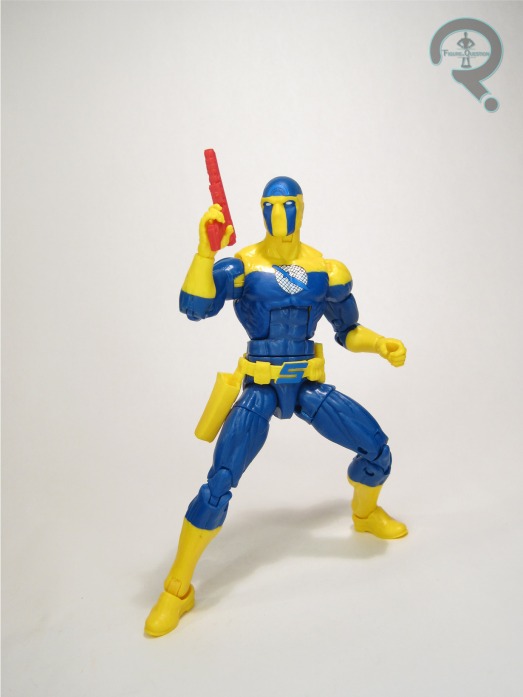 Remember what I was saying yesterday about Widow’s supporting characters not being quite so developed?  Well, we’re back to that.  Switching over from Captain America, we now move to Black Widow’s Iron Man ties, taking a look at Spymaster, a character whose ties to Widow are pretty much limited to “they both fought Iron Man.”  And they’re spies, I guess, but honestly, that’s practically the same as saying “they both fought Iron Man;” guy fought a lot of spies.  Spymaster’s primary claim to fame is his role in the “Armor Wars” storyline, where he was responsible for giving Tony’s designs to Justin Hammer.  Beyond that, there’s not a lot to this guy.  Well, now he’s got a Legends figure.

Spymaster is figure 6 in the Crimson Dynamo Series of Marvel Legends.  He’s the final single-packed figure in the assortment.  I know, I’m as disappointed as you that this is what we’re wrapping up with.  Talk about going out with a whimper.  It’s okay, the Build-A-Figure’s tomorrow; he’ll make up for it.  This guy stands 6 1/4 inches tall and he has 32 points of articulation.  He’s built on the Bucky Cap body, and boy is this thing showing the wear on the mold.  The gaps between the torso and the shoulders are really getting pronounced, to the point that I initially thought my figure might be misassembled.  I’m thinking this thing is hitting its end of life really fast here.  It’s still not a terrible base, of course, and build-wise it fits Spymaster just fine.  He gets two new pieces, for his head and his belt.  In both cases, I was genuinely surprised.  The belt can at least be chalked up to there not really being a piece that properly matches, but I fully expected the head to be another re-use of the Blizzard mold, since it’s just a

masked head.  The fact that they went to the trouble of sculpting in the mask’s details, and actually changing the very structure of the mask and how it lays on the face is a very nice touch that I think pretty much everyone is going to miss.  Spymaster’s paintwork is decent enough.  It’s a little sloppy at the changeovers, but not terribly so, and the color scheme is at least pretty bright and eye catching (which, admittedly, doesn’t seem quite right for a guy who’s a spy, but what do I know?  I’ve never stolen Tony Stark’s designs, now have I?).  Spymaster is packed with a recolor of Yon-Rogg’s gun (the same one Crossbones used), as well as the right leg to the Crimson Dynamo figure.  Let’s be real here: that’s what everyone’s gonna buy this guy for.

Spymaster’s a character I was “meh” on back when he got a Minimate, so the Legend likewise doesn’t exactly spark me into a verbal frenzy.  He’s a pretty by-the-numbers figure of a pretty by-the-numbers character, though the fact that his mold isn’t in the best shape hinders him even a bit further.  I was impressed by how much new work went into this guy, really, and on that front he’s a little bit better than I’d expected him to be.

Spymaster was purchased from my friends at All Time Toys.  If you’re looking for Marvel Legends, or other toys both old and new, please check out their website and their eBay storefront.