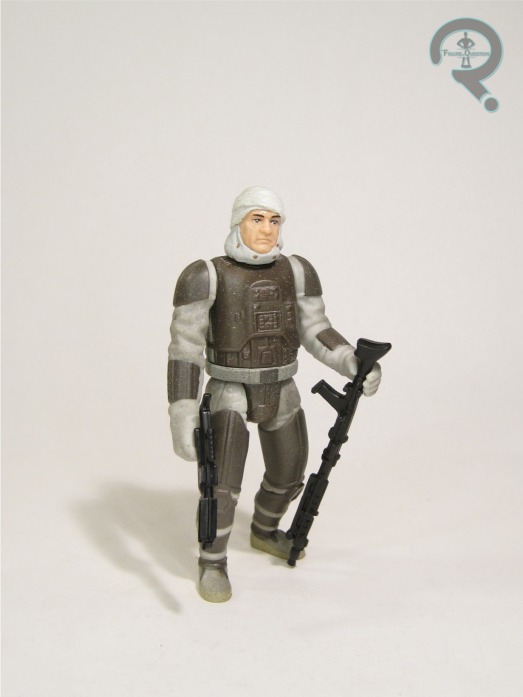 Why is it Dengar always ends up the last Bounty Hunter I review in a given Star Wars set?  I mean, it’s probably that he’s my least favorite.  That’s probably it.  I made a lot of fun of him in my review of the Black Series figure.  I guess I’ll spare him the mocking this time around.  Even if his idea of an imposing look is wrapping himself in toilet paper… I mean, in this day and age, I guess that could be seen as a status thing, couldn’t it?  That’s some pretty valuable armor, right there.  Perhaps Dengar was just getting ahead of the game.  Yeah, that’s it. 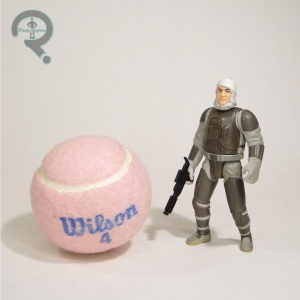 Dengar was added to Power of the Force in 1997, the same year as both Bossk and 4-LOM, making it a bounty hunter-heavy year.  While most of the bounty hunters were Empire-based, Dengar is actually based on his brief appearance from Return of the Jedi, as denoted by his lack of backpack.  The figure stands 3 3/4 inches tall and sports 6 points of articulation.  While the pre-posing was working its way out by this point, Dengar still gets just a touch of it, which has the unfortunate side effect of making him quite difficult to keep standing. That’s rather annoying.  Aside from that, the sculpt’s an okay offering.  Obviously, it’s not as technically impressive as the Black Series release, but for its era, it’s a fair recreation of his gear from the movies.  Some of the details are a little soft, but, well, that doesn’t look super out of place on Dengar.  By design, this guy’s a little schlubby.  Dengar’s paint work isn’t the most thrilling combo of colors, but it’s certainly accurate.  There’s also a fair amount of solid accent work on the grime and dirt, which makes him look appropriately like he’s been mucking around in…uh, muck, I guess.  Dengar is packed with two blasters, one long, one short, which is a solid arsenal.

My general dislike of Dengar goes back to when I was a kid, where I never really found him to be terribly impressive.  The result of that, of course, is that I didn’t own this figure growing up.  He got added to my collection in the last two years, as I’ve been really laying into this “complete run of PotF” thing.  He’s okay, but he’s still Dengar, and the fact that he’s so darn hard to keep standing certainly doesn’t help him out.

I got this guy from my friends at All Time Toys.  They’ve got a decent back stock of Power of the Force, and other cool toys both old and new, so please check out their website and their eBay Store.