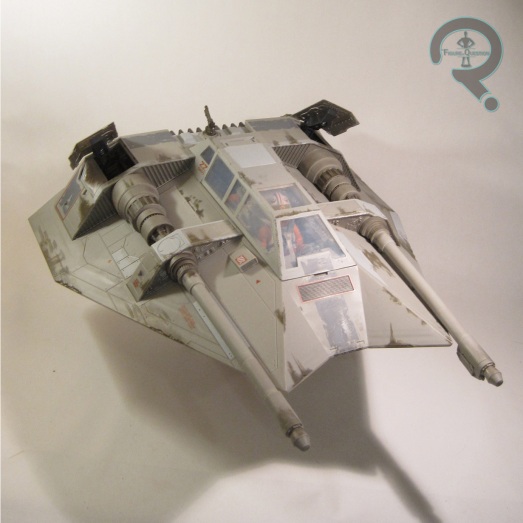 “While stationed on Hoth, the Rebel Alliance modified T-47 airspeeders to become snowspeeders. The snowspeeder was a two-man vessel, with a pilot and rear-facing tailgunner.”

The larger scale of Star Wars: The Black Series may be good for the quality of the actual figures, but the one slight downside of it is the relative difficulties of getting accompanying vehicles on the market.  Hasbro first dipped their toes in the pool of vehicles with the smaller-scale speeder bike, which went pretty well.  They then jumped all-in with the Force Awakens TIE Fighter, which went maybe not quite as well.  The then returned to smaller vehicles with a Landspeeder, which seemed to okay again.  Now they’re trying that slightly larger vehicle thing again, this time with a Snowspeeder, just in time to tie in with Empire‘s 40th Anniversary celebration.  And I’m taking a look at that bad boy today!

The Snowspeeder is part of Hasbro’s Empire Strikes Back 40th Anniversary subset of The Black Series.  As of right now, it’s the only vehicle of the year.  It also seems to have ditched the numbering scheme that was started with the TIE Fighter in 2015, which I suppose is appropriate given that the whole line is ditching the numbering set-up.  While the last few Star Wars vehicles I’ve grabbed from Hasbro have had some necessary assembly right out of the box, the Snowspeeder just needs the front guns clipped into place, making it a much simpler set-up.  The Snowspeeder measures 18 by 15, and while it doesn’t have quite the footprint and height of the TIE Fighter, it’s still quite a sizable piece, and appears to be properly scaled to the figures to boot (a big deal, since that almost never happens with anything larger than the smaller speeders).  You’ve got an easy time getting both figures into the cockpit, which is really the most important thing.  The detailing on the sculpt is all pretty darn solid.  The aforementioned cockpit is fully detailed inside, with fully formed seating, seat 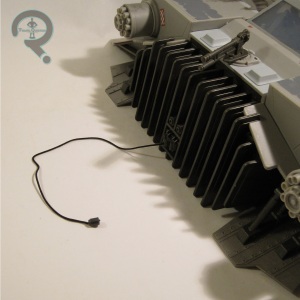 belts, and controls for the two occupants.  The exterior’s about what you expect for a Star Wars ship, with a lot of clean plates and such.  The drag fins can be lifted and extended, as seen in the film, and I really like how they work, so as to not cause any accidental damage when used.  There are additional fins on the lower rear of the ship, obviously for steering purposes.  There is also a removable panel on the ship’s right wing, exposing some of the inner workings beneath it, I guess for maintenance purposes?  Or perhaps even a bit of battle-damage in a pinch.  It’s a cool touch regardless.  There are a few other details hiding in the ship’s standard mode.  It’s got some landing gear, which works in pretty much the same way as the gear on the Vintage Collection X-Wing.  Also hiding is the ship’s tow-line, which they use to take down the AT-ATs.  It can be pulled from the back, and then you pop open a hatch on the underside of the ship to pull it back

in.  It’s not very mechanically impressive or anything, but it also won’t be prone to breakage over time, so I can kind of see Hasbro’s angle on this one.  The paint work on the speeder is pretty solidly handled, with not only the base level details, but also simulated wear and tear, as well as smaller insignias and the like.  It looks quite cool.  The accent color scheme feels off in my mind, because I always think of those stripes being orange, but that’s prior toys coloring my view, I guess.  The Snowspeeder is packed with the grapple that Luke uses to get up to the AT-AT he takes down, as well as what I can only assume is supposed to be a grenade or something.

“Dak Ralter, an eager young rebel pilot assigned to Hoth’s Echo Base, Dak served as Luke Skywalker’s tailgunner during the Battle of Hoth but was killed by Imperial fire that struck the back of the snowspeeder”

Luke’s ill-fated gunner Dak hasn’t been quite as privy to action figures as other characters, but is nevertheless an essential piece of any proper Snowspeeder set-up.  Without Dak, who’s gonna take on the whole Empire himself?  Dak stands 6 inches tall and he has 29 points of articulation.  Dak’s largely a re-use of the Snowspeeder gear Luke that was just single released.  It’s a sensible option, given that it’s a uniform, and Luke and Dak are supposed to be roughly the same height and build.  It also means that Dak makes use of a really solid sculpt that’s a lot of fun.  The one main change-up is, unsurprisingly, the new headsculpt.  He’s still got the insulating cap like Luke, though I feel it makes a bit more sense here.  The face looks to be a respectable recreation of Jon Morton’s likeness as seen in the film.  The paintwork for Dak is pretty much the same as Luke’s, albeit with the expected change to the face and to the insignias on the helmet.

The Snowspeeders are one of my favorite OT vehicles, and I’m always down for a good toy version.  After the soft performance of the TIE fighter, I wasn’t really expecting to see the Snowspeeder show up in Black Series form.  I was definitely happy to see it crop up with this year’s Toy Fair showings, and was even more excited when Dak was shown alongside it.  Definitely one of the items from this anniversary collection that I was most anticipating.  It’s a fun piece to be sure, and I think has a little more intrigue to it that the TIE Fighter.  Hopefully others feel the same way.  Is it wrong for me to want an alternate color scheme speeder with a Wedge and Janson?  That’s not entirely crazy, right?

Thanks to my sponsors at All Time Toys for setting me up with this whole thing for review.  If you’re looking for Black Series, or other toys both old and new, please check out their website and their eBay storefront.