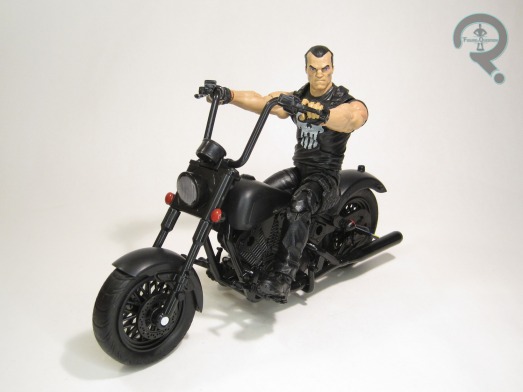 Hasbro’s “Legendary Riders” subset of Marvel Legends releases is something of a dubious offering.  It’s a really obvious choice on the outset (much like it was when Toy Biz decided to devote an entire assortment to it during their run with the line), since there are a number of memorable rides in the Marvel Universe.  Unfortunately, said rides I think are more prominent in all of our heads than they are on the page, which is why, just like with Toy Biz’s assortment, Hasbro’s had to start…stretching things a bit, to cover the fact that they effectively launched a whole new line to have a good excuse to release a Ghost Rider with a motorcycle.  Admittedly, some of their figure with vehicle pairings are slightly better than others, while others seem to take a stance of “if we add the word ‘ride’ somewhere in the bio, it’ll all work out.”  Today’s review is kind of from the latter category.

Punisher heads up the sixth assortment of the Legendary Riders sub-line of Legends, as the only actually new offering contained there-in (he’s packed alongside a re-pack of Squirrel Girl, who initially shipped alongside Cosmic Ghost Rider, who, fun fact, is another variant of Frank Castle.  How about that?).  It follows the trend so far of even numbered assortments only being half new, which seems to have worked out okay so far.  We’ve gotten all manner of Punisher looks in the last couple of years, so there’s been a little bit of re-treading, but fortunately it’s not without some decent spacing.  This guy’s largely inspired by Frank’s look from Garth Ennis’s run on the book, when he opted to angle more into a real-world take on the character.  We haven’t seen this style in figure form since the Nemesis Series in 2008, so it’s fair for it to be getting an update.  The figure stands 6 1/2 inches tall and he has 32 points of articulation.  For the most part, Frank re-uses parts from the Netflix Luke Cage figure, which is a pretty decent bulked up civilian base.  It does seem perhaps

slightly large for Frank, but not baselessly so.  He has been on the Reaper body, after all.  He gets a new head and arms, which are all pretty solid pieces.  Technically, there are two heads, with differing expressions, as well as levels of damage to him.  Personally, I like the gruffer, taped up look, but they both work well.  The new arms are using Hasbro’s new internal construction technique for the pins, which help keep things looking a little cleaner.  It’s all topped off by a re-use of the shoulder strap piece we’ve seen a few times now, which works well with the design.  Frank’s paint work is all pretty basic stuff, but certainly not bad looking.  Everything is nice and clean, and gets the job done.  Frank’s accessories are the coolest part of all of this.  In addition to the previously mentioned extra head, he also gets a pretty sweet viking helmet (safety first), a sawed off shotgun, an uzi, a TEC-9, a machete, and a baseball bat.  Not a bad selection of weaponry there.

Also included, of course, is the motorcycle that justifies the “riders” portion of the set.  Now, when I think of Punisher and vehicles, I tend to think more of a van sort of thing, but that’s not very cost effective at this scale, so he gets a bike.  It’s a chopper-style bike, which seems appropriate for Frank.  I can’t say I’m familiar enough with this particular incarnation of the character to know if there’s any specific reference for this particular bike, but it looks cool, so I can’t really fight that.  It looks like the majority of the sculpt is shared with the bike from the Riders Wolverine set, but not having personally handled that set, I can’t say with absolute certainty.  At the very least, there are a few cosmetic changes, including the handle bars, which keep the two bikes unique enough that they don’t look like straight re-use.  Re-used or not, the sculpt is a very impressive one, and it looks like a relatively real vehicle.  There’s some really strong detail work going on here, and my favorite little bit by far is the license plate on the rear of the vehicle.  It’s just really well done, and it sells the realism of the whole thing so nicely.  About the only thing I’d liked to have seen that isn’t included is some weapon storage, which feels like the sort of thing that Frank would really want on whatever vehicle he ended up using. 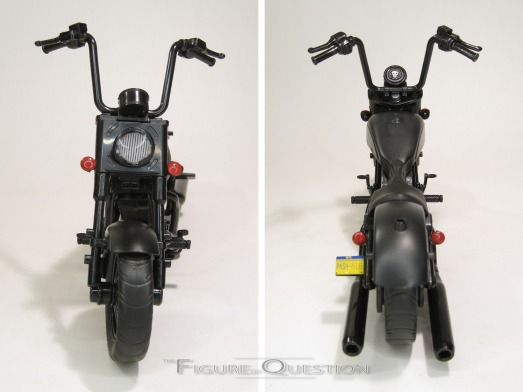 Remember when I didn’t really like Punisher and didn’t tend to buy toys of him?  Those were the days, huh?  The turnaround time on this set felt really quick, so I didn’t really have much time to process that it was coming, or really form any thoughts about it ahead of time, so I more or less opened it up blind.  I wasn’t expecting much, but ultimately, I got a pretty fun set that feels worth while enough to justify its existence.  After being left kind of cold by both offerings in the last assortment, I’m happier with this one, and I don’t feel quite as negative about the overall prospects of the sub-line.

Thanks to my sponsors over at All Time Toys for hooking me up with this set to review.  If you’re looking for cool toys both old and new, please check out their website and their eBay storefront.