One of Alien‘s enduring contributions to the sci-fi lexicon was moving space-faring characters away from being just purely scientists and military experts, running around in spandex jumpsuits and carrying fancy laser guns and the like, speaking in perfect english, and rarely ever showing any actual normal emotions.  The crew of the Nostromo were a decidedly blue collar bunch, a band of career space truckers not even remotely qualified to be the ones handling first contact with a hostile species.  Their interactions with these strange situations, coupled with their own very realistic interactions and dialogues with each other, gave the film a far more believable and realist feel, and had the side effect of also making the tragedies that befall each of them even more impactful.  Perhaps two of the most interesting characters in the film are the Nostromo‘s engineers, Dennis Parker and his subordinate Brett, two men stuck at the bottom of the Nostromo‘s totem pole.  Parker in particular is one of the film’s most central characters*, his very reactionary and fiery responses to the growing threat serving as a consistent counterpoint to Ripley’s coldly rational approach.

Parker is part of Series 2 of NECA’s Alien: 40th Anniversary line, which celebrates Alien‘s 40th anniversary, albeit a year late.  NECA’s gotta NECA.  Oh, also Series 2 is the only one available through specialty markets, with Series 1 going to Target and 3 going to Walmart.  Why they decided to split up the line between three different venues is anyone’s guess, and I feel it’s only going to further the growing frustration with NECA’s distribution practices and the relative difficulty of following any of their lines right now.  Not helping matters is the difficulty of getting even this specialty assortment, which appears to have been rather scarce.  But, I’m getting away from the actual review.  Back on topic.  Parker here is getting his third ever action figure, following the old Galoob Action Fleet version and the Minimate.  The figure stands 7 3/4 inches tall and he has 30 points of articulation.  While he’s got a lot of articulation, the range is definitely more on the limited side with this guy.  I had some trouble getting him to properly hold the flamethrower on my figure.  It’s certainly nothing terrible, but he’s not quite up the same level as the Marines.  It’s possible he might have a 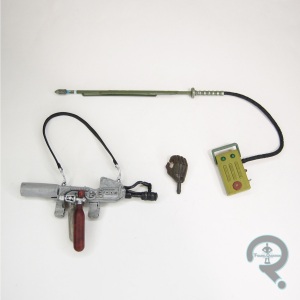 little more range if I pushed a little more on those joints, but I’m hesitant to do that, given NECA’s usual track record on such things.  Parker’s sculpt is all new, and it’s a pretty impressive piece of work.  The likeness of Yaphet Kotto is definitely a very strong one, and the detailing on his uniform is nice and crisp…well, nice and crisp in the appropriate, disheveled way.  The only thing that seems slightly off to me is the figure’s torso, which appears to be a bit too long to be a proper proportionate match for the rest of the sculpt.  It’s not really far off, but it’s enough to stick out.  Parker’s paint work is pretty decently handled.  His face isn’t quite on par with some of Hasbro’s more recent work, but it’s still quite lifelike, and the detailing on the uniform aids in showcasing the depth of the sculpt.  Parker is packed with a flamethrower (the same one originally included with Ripley), the cattle prod he and Brett whipped up, and a second right hand with a slightly different grip.  The hand perplexes me a bit, because it’s a tighter grip than the standard, but not enough to actually let him hold either of the accessories any better, which makes me question why it was included.

Parker’s my favorite character from the film, and I’ve been hoping to see him added to this line pretty much since NECA started doing the Nostromo crew back in 2015.  I’m glad to have finally gotten the figure, and he’s a pretty solid addition to the overall line.

Thanks to my sponsors over at All Time Toys for setting me up with this figure to review.  If you’re looking for NECA figures, or other toys both old and new, please check out their website and their eBay storefront.

*Re-reading some of my old reviews, I see that in my review of the Parker Minimate, I referred to him as “not a character who’s key to the plot.”  I’m not sure why I said that, and I’m gonna have to call out 2015 Ethan for his totally incorrect and bogus assessment of the character there.  What gives, man?