“General Thunderbolt Ross transforms into the Hulk, a creature he swore to destroy.”

From the second appearance of the character, the Hulk’s been no stranger to changes in color.  Originally shifting from grey to green, and then back to grey, and then green again, there’s certainly been some back and forth.  In 2008, Jeph Loeb and Ed McGuinness through another color into the mix, shifting the Green Goliath into the Crimson Goliath.  Of course, this new Red Hulk wasn’t just a recolor of Bruce Banner, but was instead someone else, whose identity remained a mystery for over a year…and then it turned out to be Thunderbolt Ross, in one of the most convoluted, fake-out-filled reveals in comics history.  Nowadays, of course, the reveal’s common knowledge, and gets used for toy packaging bios like that one above.  But hey, toy bios mean there’s a toy to go with them, right?

Red Hulk is a Target-exclusive deluxe Marvel Legends offering.  This marks Red Hulk’s second time in Legends form.  The first time was as a Build-A-Figure way back in 2008, and he was actually a Target-exclusive that time as well.  They sure do like those red exclusives, don’t they?  The figure stands 8 inches tall and he has 30 points of articulation.  Red Hulk is our fourth use of the 80 Years of Marvel Hulk body, which is, again, not much of a surprise.  It’s a good sculpt, and it’s no surprise that Hasbro wants to get more uses out of it.  As with Grey Hulk, this guy changes the body up a bit by adding a new head sculpt into the mix.  This one’s got Red Hulk’s spikier hair style (which, by the way, never really made much sense, since it’s not like this is anything like Ross’s usual hair style…and where the hell does his mustache go?), and also changes up the expression.  He’s still angry and screaming, but it’s a slightly different looking angry and screaming.  It’s more like someone barking orders, which feels appropriate for the character.  He ditches the torn shirt piece that the last two Hulks had, which is sensible, since I don’t believe Red Hulk’s ever really done the torn shirt thing.  The paint work on this guy is pretty basic, and that’s honestly a little bit of a let down when compared to the other two Hulks I’ve reviewed on this body.  He lacks any real accent work, apart from a little bit on the face.  That much is at least pretty cool, but his body ends up feeling, I don’t know, unfinished, I guess.  In terms of accessories, he gets two sets of hands, one in fists, and one in open gesture.  They make for some nice variety for posing.  In a perfect world, I’d have liked to see maybe another head sculpt as well, maybe with the grin the character frequently sported, but I suppose that, given his size, just the extra hands are acceptable.

Red Hulk hasn’t exactly been the most readily available figure, at least in my neck of the woods.  I’ve not seen him at retail myself, and Target’s site’s really not been much help.  I spent a good chunk of time looking for him, but with no luck.  Fortunately for me, my former co-worker Jon Nieto, who knows how much I like Legends, happened to catch them while they were in stock on the website, and was kind enough to snag a second one for me.  That sure made my life easier!  Thanks Jon!  There’s not a ton new going on with this figure, but the updated Hulk body is still always cool to see again, and he sure does contrast nicely with the 80th Hulk. 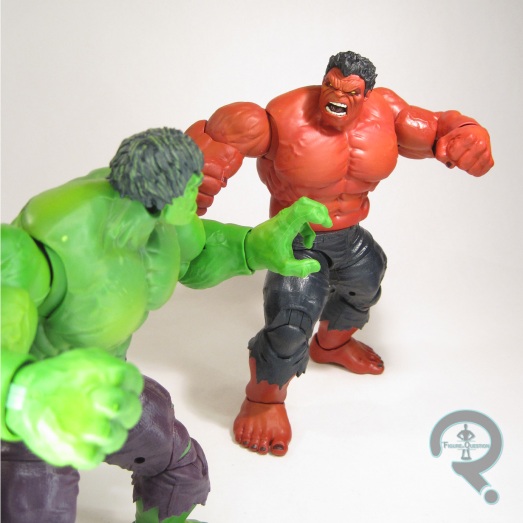