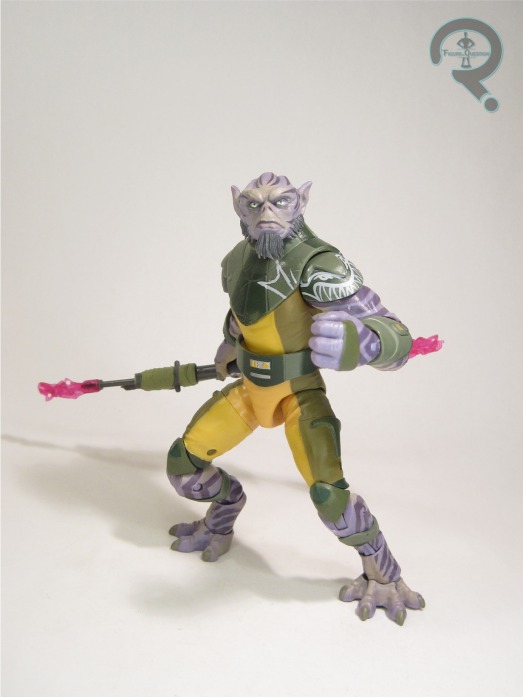 “Meet the muscle of the Ghost team. Garazeb ‘Zeb’ Orrelios was a cunning Lasat Honor Guard who adopted the cause of rebellion against the Empire!”

Since 2016, Hasbro has been slowly but surely working their way through the main cast of Rebels in the Black Series line-up.  They started off with the most surefire sales, and then slowly worked through, giving us five of the original six-man team (plus a matching Ahsoka for good measure).  For the final member of the team, Garazeb “Zeb” Orrelios, there was a bit of an issue of scaling, given his larger than average size.  Fortunately, Hasbro’s just recently implemented a larger deluxe price point, which is really perfect for such a character, allowing for that core team to finally be completed! 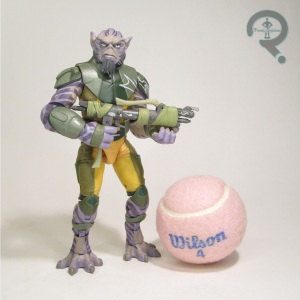 Zeb is another piece of Hasbro’s latest relaunch of their Black Series line-up.  He’s his own single release, of course, but is designed to accent the other six Rebels figures, which have all gotten a reissue in the new style packaging, and released at the Deluxe style price point.  There’s some humor to the fact that Hasbro finally got around to actually getting out some standard release numbered Deluxe figures, just in time to completely ditch their numbering all together.  The figure stands 7 inches tall and he has 31 points of articulation.  Though he may have a stockier build than his comrades, Zeb’s articulation continues the Black Series trend of improved mobility.  Pretty much all of the joints have a clear range of motion, and the arms are particularly good, in both the shoulders (which are unimpeded by the shoulder gaurds) and the elbows (which attain a more than 90 degree bend, kind of essential for properly holding his weapon).  Zeb’s sporting a totally unique sculpt, sporting his Season 1/2 appearance, so he matches up with the rest of the Ghost crew so far.  I do have to wonder if, now that the main crew is complete in one cohesive style, we might see later season looks as well, which would grant Hasbro the opportunity to do some more re-use on these parts.  Of all of the humanoid Ghost crew members, Zeb is the one whose look has been the least changed to translate him into The Black Series style. This largely due to his being a Lasat, and therefore having a far more alien appearance.*  Some of his proportions have been subdued a bit, and he gets some deeper detailing on his face and in the texturing of his clothing.  It works well, and he fits in nicely with the rest of the crew.  His head’s definitely capturing the grumpier side of Zeb, which is generally a good choice for the character, though I can’t help but wish we had maybe gotten a softer Zeb as well.  Zeb’s paintwork is pretty solid overall.  The base application is all very clean, and they’ve done a great job of capturing the patterns on his skin.  He also gets the printing on his eyes, which obviously doesn’t look as real here as on the human characters, but does still inject a little more life into the figure.  Zeb is packed with his  Lasan Honor Guard AB-75 Bo-Rifle, which is quite an impressive piece of work.  It’s packaged in its staff configuration, complete with two energy effects pieces.  It also has the ability to reconfigure into the rifle set-up, and does so pretty well at that.  Rifle mode also allows it to be stored on Zeb’s back, as seen on the show.  It’s a really awesome piece, and it’s great that they actually got it to work as it’s supposed to.

Ever since getting into this whole Black Series Rebels crew thing, I’ve been curious to see how Zeb would be handled.  With the introduction of the deluxe price point, his inclusion seemed inevitable, and here he is.  I’m pretty psyched to finally have the complete team, and it helps that Zeb is just such an impressive package.  The engineering on this figure is really great, and he’s just a ton of fun to play with.

Thanks to my sponsors at All Time Toys for setting me up with this guy for review.  If you’re looking for toys both old and new, please check out their website and their eBay storefront.

*Fun Fact: the Lasat, and Zeb in particular, are based on Ralph McQuarrie’s original concept for Chewbacca.  Just one of many McQuarrie designs to find its way into Rebels.