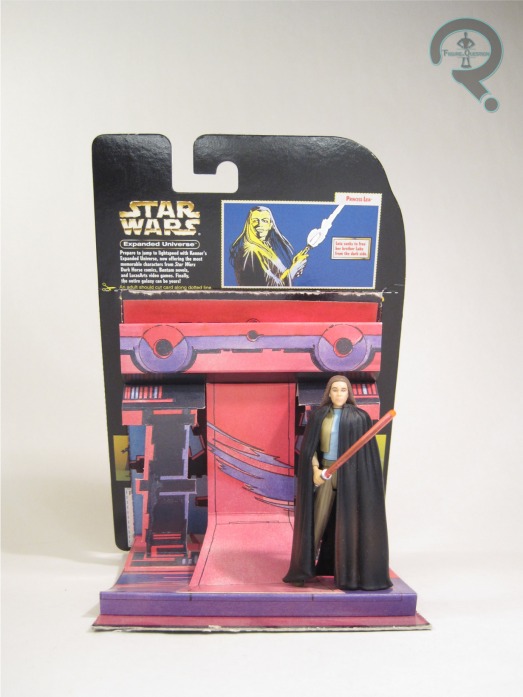 “Six years after the destruction of the second Death Star, the galaxy is thrust into turmoil. A reborn evil threatens to enslave the galaxy, and the Republic’s closest friend – Luke Skywalker – may become their greatest enemy. Hoping to free her brother Luke from the evil of the dark side, Jedi Leia prepares to match her power against that of a reborn Emperor. Boarding his colossal warship, Leia is overwhelmed by the oppression of the dark side.”

If you’ve been following my Kenner Power of the Force II reviews as of late, you may have seen me start to get a little bit…uninspired about things?  In my defense I’m hitting a lot of the stuff from when the line was a little same-y.  I do still really love the line though, so I’m going to try to realign with something a little more exciting. Perhaps the most exciting portion of the line was its 1998 Expanded Universe spin-off.  It was our first real glimpse into toys of the world outside of the movies, and also gave Kenner some free reign to do some cool new stuff.  There were a handful of different stories covered, but by far the one to get the largest focus was Dark Empire, a rather notable continuation of the original trilogy at the time.  I’ve looked at both Luke and the Emperor from that story, and now I’m digging further into the set with an updated Princess Leia! 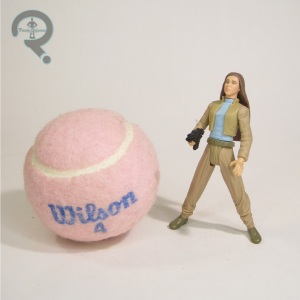 Princess Leia from Dark Empire was part of the first seven figures in what would eventually be a nine figure line-up of the Expanded Universe sub-line.  She, like most of the EU figures, proved a bit scarce at the time of release, and honestly hasn’t ever reached the same level of plentifulness as other PotF figures.  The figure stands 3 1/2 inches tall and she has 6 points of articulation.  Leia is an all-new sculpt, patterned on her more action-faring design from the comics.  It’s an interesting design set-up.  She adds a Jedi-Luke-esque cape to her attire, and beneath it she’s got something that looks akin to Luke’s Bespin gear.  It’s definitely helps to solidify the more traditional protagonist role Leia falls into during the course of the story.  It’s a pretty decent sculpt overall.  It’s rather in keeping with the rest of the mid-line Leia sculpts from PotF, with a likeness that’s consistent with those other figures, making it easy to tell she’s supposed to be the same person.  The figure has a little bit of trouble standing without the cape, but with it on she keeps up just well.  And honestly, who’s not going to use the cape?  It’s so cool.  Leia’s paint work is, like the other EU figures, a touch more vibrant than the usual Star Wars fare.  Of all of them, she’s certainly less removed than others, but I do certainly enjoy the multitude of colors used on her cape.  It’s a very nice touch.  Leia is packed with a light saber (in a rather concerning red, to match her brother), and a small blaster.  And, like all of the single-carded EU figures, her card back also unfolds into a small 3D back drop for her, based on the comics.  This is consistently my favorite part of these figures.

The EU figures were a favorite piece of mine from this line, but as I noted when I looked at Kyle, the only ones I actually got as a kid were Luke and Palpatine.  I wanted the others, but they are, as noted above, not the most common PotF figures, and they’re one of the few sets I was more insistent about getting carded.  Fortunately, I happened upon a complete set of them through All Time back last year.  Leia’s perhaps not the flashiest of the set, but she’s still a fun variant of the character, and I get a real nostalgic kick from her.