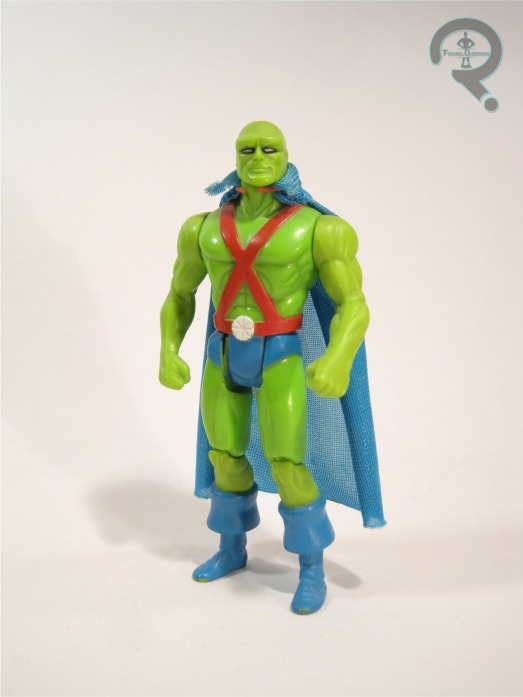 “The Martian Manhunter has a truly awesome array of powers. Beside being practically invulnerable, he has the power of super-breath, flight, invisibility, super-vision, and super-strength. He also has the ability to walk through walls, as well as the power to transform himself into any creature and acquire that creature’s powers and abilities.  The Martian Manhunter cannot survive in a vacuum, and cannot use any of his other powers when he is invisible. Most important, however is his vulnerability to fire, which can weaken and eventually destroy him.  On Mars, the Martian Manhunter’s real name is J’Onn J’Onzz. On Earth, he sometimes adopts the civilian identity of Detective John Jones.” 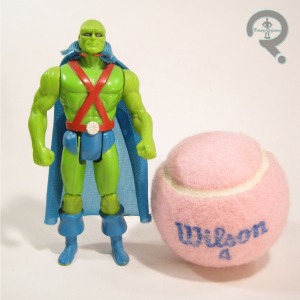 Martian Manhunter was released in 1985, the second year of Super Powers.  He was one of four members of the Justice League to be added to the line that year.  He’s based on Jose Garcia-Lopez’s illustration of the character from the DC Style Guide, just like the rest of the line, which means he depicts J’Onn just after they’d started adding in a few more of his more Martian aspects.  It means it wasn’t *quite* as classic a design as some of the others in the line-up, but it also made him slightly more distinctive, and ultimately became the more common design for the character.  The figure stands 4 1/2 inches tall and he has 6 points of articulation.  His sculpt was an entirely new affair, well-matched to the style of the rest of the line.  It gives Manhunter the proper presence for the character, with a build that’s not quite as bulked up as the line’s version of Superman, but which still casts an imposing silhouette.  His arms aren’t as preposed as the first year figures were, which looks a little better in the basic standing pose.  Manhunter’s head sculpt is the part that is the most modernized portion of the figure, with Manhunter’s much more prominent brow.   His expression has a nice, friendly, if still alien feel about it, which really feels perfect for the character.  Like other figures in the line, Manhunter’s cape is a separate cloth piece.  It’s got the extra bit of collar, which helps to hide the plastic clip a bit better than other figures, making it a slightly more convincing piece.  Martian Manhunter’s paint work is pretty simple, but it’s bright, colorful, and pretty clean, at least apart from the bit of wear and tear that my figure’s taken.  As with all Super Powers figures, Martian Manhunter got his own action feature, dubbed “Power Action Martian Punch”.  When you squeeze his legs, his arms swing back and forth.  Or at least they should, but they actually don’t on mine.

Martian Manhunter is on the earlier side of my Super Powers collecting, when I went through a string of getting them as Christmas presents from my parents.  I want to say he was the fourth or fifth figure I got from the line?  It would have been when I was around 7 or 8.  He was the same year as Green Lantern, so he did sort of pale in comparison just a touch at the time.  He didn’t have his cape originally, but I got one for him later down the line.  He’s a really cool figure, and definitely a fantastic starting point for the character. 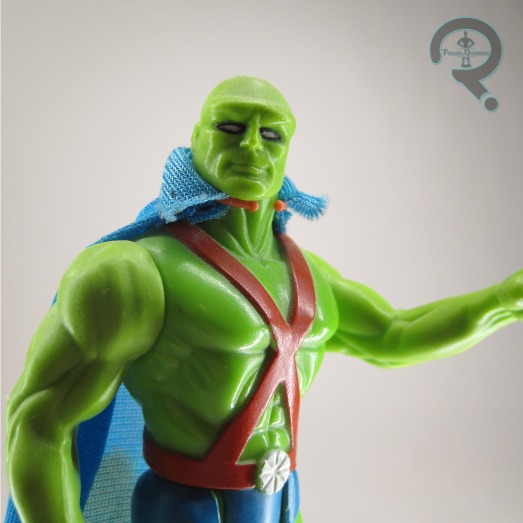