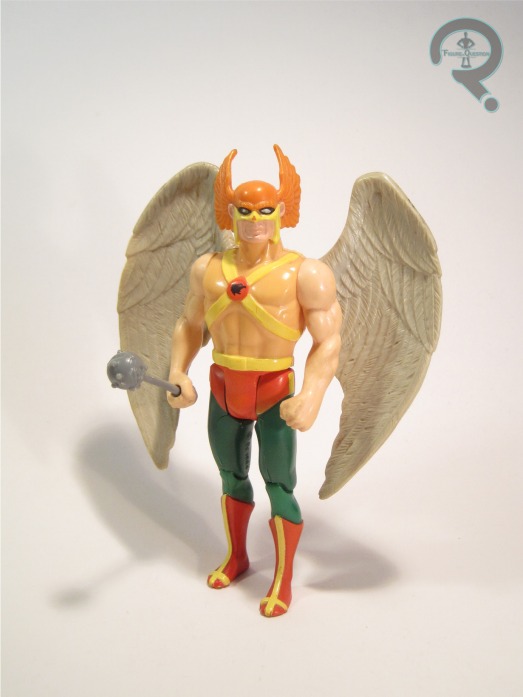 “Hawkman’s wings enable him to fly and his belt enables him to defy gravity.  He uses weapons of the past from the museum he curates, matched with futuristic weapons, and criminology from his home planet, Thanagar.”

Oh man, I haven’t written a review about Hawkman since #0029.  Not only is that from the site’s first month, but it was also the review where I instituted my old randomized list I used to pull from.  Man, I used to talk about that thing all the time!  What a crazy trip down memory lane.  Well, it’s fitting that I’m doing this whole trip down memory lane, because I’m also doing that in a greater sense with the contents of today’s review.  Yes, I’m taking a look at another Super Powers figure today, specifically the aforementioned Hawkman.  Like last week’s GL, he was a character left out of Mego’s treatment for DC Superheroes, and was therefore making his debut in action figure form courtesy of this line.  And I’m looking at that figure today!

Hawkman was released in the first series of Super Powers in 1984.  As I touched on in my GL review, the line-up for that first series was very much inspired by Challenge of the Super Friends, and Hawkman’s inclusion here really goes along with that, given he was probably the most obscure character in the first assortment.  He’s the tallest figure in the original line-up, at 4 3/4 inches tall, and he’s got 8 workable points of articulation (the wings technically have two joints each, but on each of them one of those joints is explicitly tied into the action feature).  In addition to height, Katar also was just generally bigger in size than the rest of the Justice Leaguers from the first set.  It’s pretty fitting, since he tended to be drawn as a little bit bigger, and it helped to sell him as a little more alien.  It also gave a nice variety of height and build to the male members of the Justice League right out of the gate.  Super Powers‘ handling of uniqueness of build has always been one of my favorite aspects of the line, and it’s ultimately why I feel it holds up as the quintessential DC line, even in light of lines with deeper character selections.  The detail work on Hawkman is really pretty great, with the best work being on his mask and wings, both of which get some great texture work.  His wings are also large enough to not look too dinky, while also being small enough that he doesn’t have major issues with stability, which is something later Hawkman figures would struggle with.  The paint work on Hawkman was, like the rest of the line, very clean, very bold, and very bright, all of which are good things.  Mine’s taken a little bit of beating on the front of the nose, and has a little bit of discoloration on the torso, but has for the most part held up well.  Hawkman was packed with his mace, and also featured “Power Action Flight Wings.”  When you squeeze his legs, his wings flap.  Not a bad feature at all.

Hawkman’s one of the earliest when it comes to my Super Powers collecting.  I got him for Christmas, I want to say in 2000, which would have made him I think my third or fourth Super Powers figure.  It was the year prior to GL and Manhunter, I know that for sure.  I had my Total Justice Hawkman at the time, and he wasn’t really doing it for me as a classic Hawkman, so my Dad found a small little lot of figures, which included him, and gave him to me that year.  He’s a good one.  Kind of an odd one for me to have so early on in retrospect, but a good one nevertheless, and certainly high on the list for the character’s figures.