“Apocalypse launches an offensive against humankind in pursuit of a world where mutants rule—and only the strong survive.”

Hey, do you ever just forget to review something for a while, and then get kind of awkward about how long you’ve been forgetting to review it, and then just sort of wonder if you should even review it at all, and then have a convenient hole in the schedule and figure why not?  Or is that just a me thing?  It’s probably just a me thing.  So, um, last year was the 25th anniversary of “Age of Apocalypse”, which I was discussing just over the weekend.  Hasbro did some Legends to tie-in, and I’ve so far looked at all but one of those figures, so I’m finally wrapping things up here today, with a look at the crossover’s titular antagonist, Apocalypse.

Apocalypse was his own stand-alone release last year, as a Deluxe-sized Marvel Legends offering.  He marked a slight change for the Build-A-Figure-sized figures that have shown up previously at this price point, being a totally new figure, rather than a slight tweak on a prior BAF.  The figure stands 8 inches tall and he has 32 points of articulation.  His starting point is the same as the last Legends Apocalypse at his core, which is sensible, since they’re the same guy and all.  He gets a new set of heads, new boots, and new add-ons for his collar, shoulder pads, wrist guards, and cape.  You’ll note that I said “set of heads”; yes, this guy actually gets two new heads in place of the single head the last guy got.  They’re both different expressions from the BAF, with one a calm and menacing head, and the other a mad cackling laugh.  Of the two, I definitely prefer the laughing head, because it’s just got a lot of character to it, but both are certainly impressive.  The boot pieces are a little more basic than the more armored appearance of the last one, but maintain accuracy to the source

material for what it’s worth.  The new add-on pieces are all pretty cool looking, but I did find that the shoulder pads and cape have a real tendency to pop out of place more frequently then I’d like.  Additionally, the wrist guards cut down a lot on the range of motion for the elbow joints, which does limit what you can do posing him.  Still, there’s no denying that they got the overall look down.  In terms of color work, a lot of Apocalypse is molded plastic, which cuts down on the paint apps.  They use a lot of metallic plastic which works out nicely, and the painted details that are present are all pretty cleanly handled.  He’s rather bright and eye-catching, which I’m always down for in an action figure.  Apocalypse is packed with a extra left hand with an open grip, and a skull (presumably human), which he can hold all menacing like.

I, like a good number of people, was a little surprised when it was Sugar Man, not Apocalypse, who was serving as the BAF in the AoA assortment, but it clicked into place when this standalone showed up.  Honestly, it took a little bit of the urgency out of getting the figure for me personally.  I don’t *dislike* Apocalypse, but I can’t say he’s my favorite, and this in particular isn’t my go-to look for the character.  As his own release, he does benefit from the extra accessories, so that’s certainly cool, but the overall figure is just a bit…anti-climactic?  I guess maybe that’s why it took me five months to actually review him, huh?

Thanks to my sponsors over at All Time Toys for setting me up with this figure to review.  If you’re looking for Marvel Legends, or other toys both old and new, please check out their website and their eBay storefront. 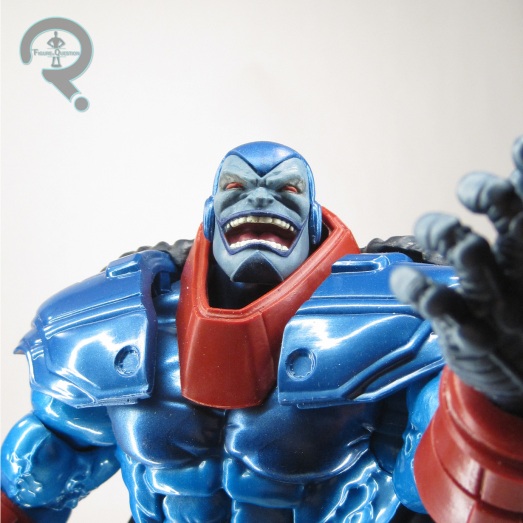